Up next in our overview is a pair of modest micro-ATX models from ASRock, the B560M Pro4/ac, and the B560M Pro4. The only difference between the two models is the ac variant includes an 802.11ac Wi-Fi 5 CNVi. Everything else is built to the same specification and design, including a black and grey patterned PCB, silver heatsinks, as well as an advertised 8-phase power delivery with 50 A power chokes. ASRock does include a small section of RGB LEDs in the bottom-right hand corner of the board. 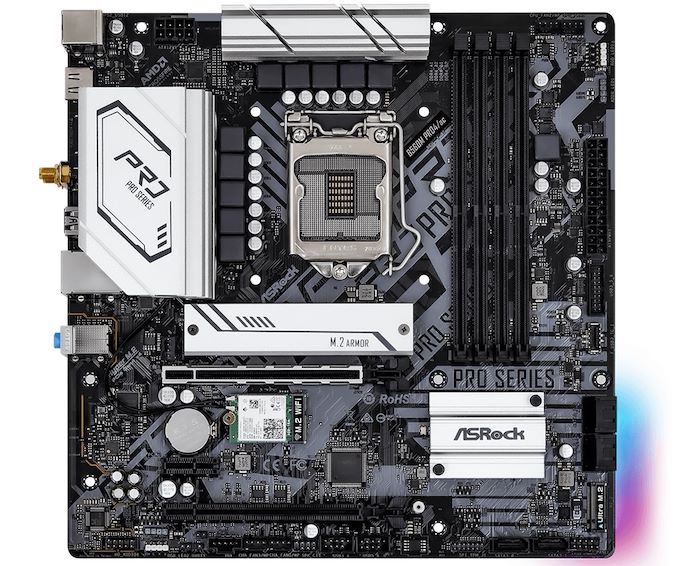 The ASRock B560M Pro4/ac pictured above

Both the ASRock B560M Pro4/ac and B560M Pro4 include a smaller micro-ATX sized PCB, with two full-length PCIe slots with the top slot operating at PCIe 4.0 x16, and the second slot locked down to PCIe 3.0 x4. ASRock also includes one PCIe 3.0 x1 slot, with the B560M Pro4/ac using an Intel-based Wi-Fi 5 CNVi. In regards to memory support, there are four slots with supported speeds of up to DDR4-4800 and a maximum capacity of up to 128 GB. Storage options consist of dual PCIe M.2 slots with one operating at PCIe 4.0 x4, and the other including support for both PCIe 3.0 x4 and SATA drives. ASRock also includes six SATA ports with two of these featuring straight-angled connectors and four with right-angled connectors, with RAID 0, 1, 5, and 10 arrays supported.

On the rear panel, both models include four USB 3.2 G1 Type-A and two USB 2.0 ports, with a single HDMI video output and three 3.5 mm audio jacks controlled by a Realtek ALC897 HD audio codec. The B560M Pro4/ac includes a pair of antenna connectors for an unspecified Intel 802.11ac Wi-Fi 5 CNVi, with both models including a single Intel I219-V Gigabit Ethernet controller and a PS/2 combo port.