Finishing up our look at GIGABYTE's B560 models, we come to what seems like its entry-level option (at the time of writing). The GIGABYTE B560M D3H looks similar to the B560 DS3H visually, with a black and off-white printed PCB, with a black power delivery heatsink cooling the CPU section of the VRMand a black chipset heatsink which resembles a shield. GIGABYTE is advertising a direct 6+2 phase power delivery and requires a single 8-pin 12 V ATX CPU power input to deliver power to the processor. 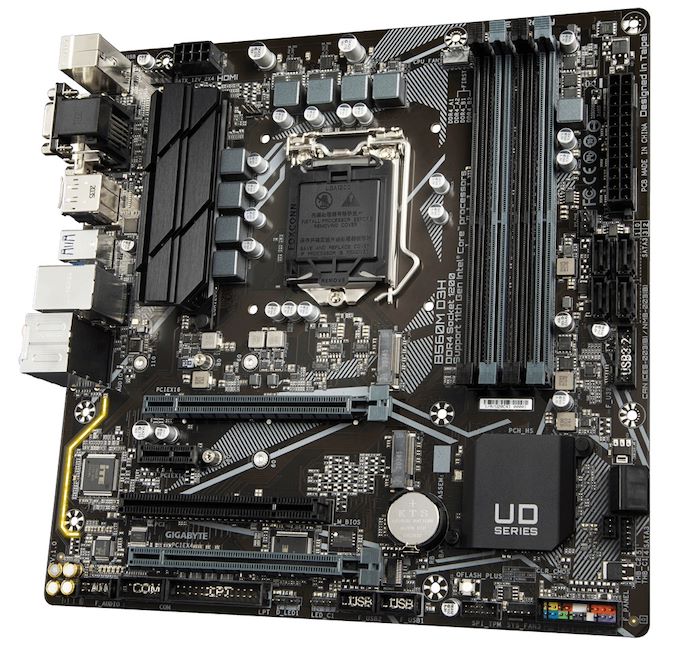 Unique to other GIGABYTE B560 models, the B560M D3H includes a legacy PCI slot, one PCIe 3.0 x1 slot,with two full-length PCIe slots with the top slot operating at PCIe 4.0 x16 and the second slot locked down to PCIe 3.0 x4. We have plenty of storage options for a budget board, with one PCIe 4.0 x4 M.2, one PCIe 3.0 x4/SATA M.2 slot, and six SATA ports, which do include support for RAID 0, 1, 5, and 10 arrays. Four of the SATA ports feature straight angled connectors. Focusing on the memory, there are four slots with support for up to 128 GB, although GIGABYTE hasn't revealed its memory QVL list at the time of writing.

On the rear panel are a single USB 3.2 G1 Type-C, three USB 3.2 G1 Type-A, and two USB 2.0 ports, with four video outputs including one D-sub, one DVI-D, one HDMI, and one DisplayPort. For networking, GIGABYTE includes an unspecified Intel Gigabit Ethernet port, with six 3.5 mm audio jacks powered by an unspecified Realtek HD audio codec. Finishing off the rear panel is a PS/2 combo port for legacy keyboard and mice.