TUF or the Ultimate Force used to be notable for its tough and rugged Sabertooth models, but a couple of years ago, ASUSrebranded TUFto thegaming series we have today, which is designed to offervalue at a reasonable price point.ASUS has unveiled three TUF Gaming branded models (at the time of writing). This includes two micro-ATX and the sole ATX sized model, the ASUS TUF Gaming B560-Plus WIFI. The aesthetic follows the same black, grey and yellow accented design we have become accustomed to with the redefined TUF series. ASUS is advertising an 8+1 phase power delivery, with one 8-pin 12 V ATX CPU power input. 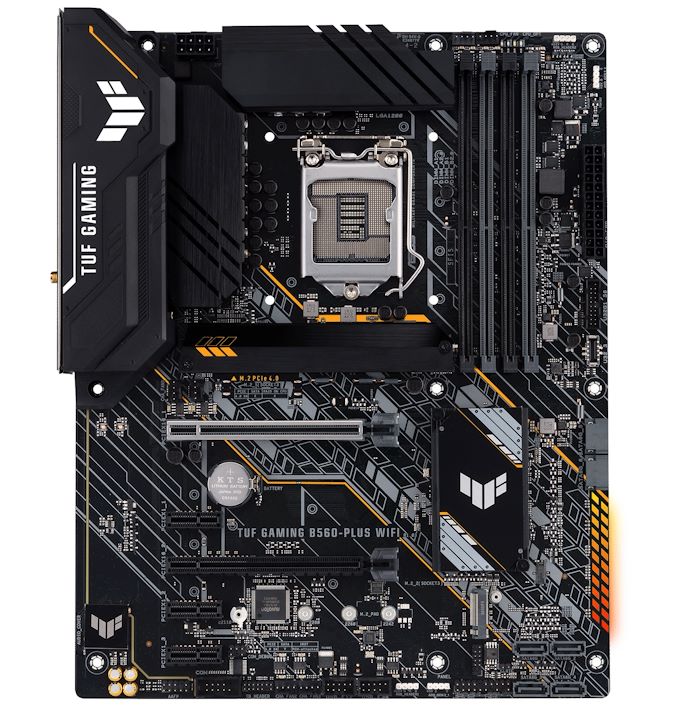 Being an ATX sized model, the ASUS TUF Gaming B560-Plus WIFI has plenty of PCIe options available, including two full-length PCIe slots and three PCIe 3.0 x1 slots. The top of the two full-length PCIe slots operates at PCIe 4.0 x16, while the second slot is electronically locked down to PCIe 3.0 x4. The board includes two M.2 slots, including one PCIe 4.0 x4 and one with support for both PCIe 3.0 x4 and SATA drives. There's also a total of six SATA ports including four in the bottom right-hand corner with straight angled ports, although all six include support for RAID 0, 1, 5, and 10 arrays. For memory support, four slots allow users to install up to 128 GB, with supported speeds of DDR4-5000.