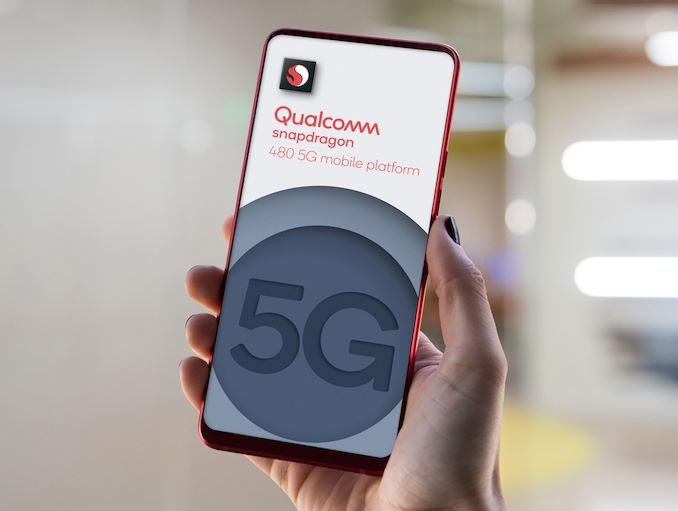 Today Qualcomm is making a big step towards enabling wide-spread adoption of 5G through the announcements of the new Snapdragon 480 low-end 5G SoC. The company had already alluded a few months ago that it would be releasing a Snapdragon 400-series design with 5G compatibility, bringing the new connectivity standard to the lowest-cost devices of the market, targeting the very high volume $250 price range.

The new Snapdragon 480 is an extremely impressive SoC not merely because of its 5G feature list, but also because it’s a major performance upgrade in many aspects, including the use of two Cortex-A76 cores as its main performance CPUs – a very large jump in the 400 series family, likely representing a major leap in performance for millions of low-cost devices in the market.

Starting off with the CPU configuration, the new Snapdragon 480 is pretty exciting for a SoC in the low-end, as it ditches the older Cortex-A73 cores of the previous generation Snapdragon 460 for a pair of newer Cortex-A76 cores, running at 2.0GHz. This isn’t the newest CPU IP on the market, however the jump from an A73 to an A76 is extremely large in terms of single-threaded performance, and is set to bring significant user experience benefits for new devices using the Snapdragon 480. The new SoC is a 2+6 CPU design, unlike the 4+4 setup of its predecessor – multi-threaded performance might not see as large a bump, but for this class of SoC I don’t see that as being an issue. The CPU configuration actually looks almost identical to what we’ve seen on the Snapdragon 675 – those parts would be good indicators of what to expect from the new 480 design.

On the GPU side of things, we’re seeing an upgrade from an Adreno 610 to an Adreno 619 – Qualcomm here promises a 100% increase in performance over its predecessor in the Snapdragon 460.

On the memory side of things, this is still a low-cost 2x16b LPDDR4X SoC, however we’ve seen a slight boost in frequencies to 2133MHz.

AI performance is said to be increased by 70%, partly due to the upgrade to a new Hexagon 686 DSP block with vector and tensor extensions. Interestingly on the camera side of things, Qualcomm quotes that they’ve actually implemented a triple-ISP system, a feature that was only recently announced in the flagship Snapdragon 888 a few weeks ago. The maximum sensor resolutions lie in a 64MP for a single module, 25+13MP in dual-camera mode, or 13+13+13MP in triple-sensor capture mode.

Oddly enough even though the ISP capabilities have grown this generation, the video encoder is still only limited to 1080p60 H.264/H.265. Qualcomm also discloses that the display controller maxes out at 1080 x 2520, although it supports refresh rates up to 120Hz.

5G in the low-end

Although the Snapdragon 480 would have been impressive just with the aforementioned specification upgrades, the big feature of the new generation SoC is its new modem subsystem which fully supports 5G NR. 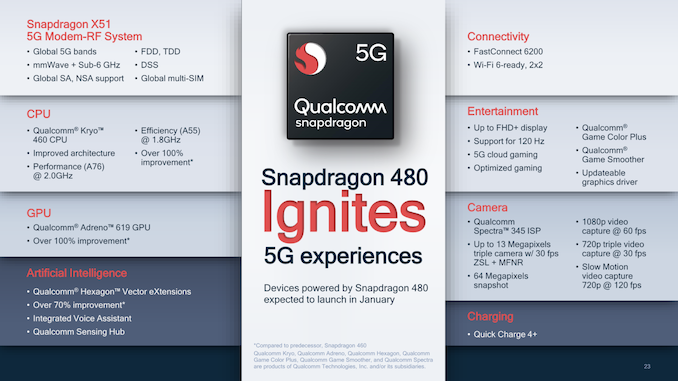 The integrated X51 modem supports LTE up to 800Mbps downlink and 210Mbps uplink, as well as combined 5G sub-6 and mmWave throughput of up to 2500Mbps downlink and 660Mbps uplink. Sub-6GHz spectrum capability falls in at 100MHz, but what’s very surprising to see is that even though the chipset is a low-end low-cost design, it still features mmWave capabilities – albeit with a much smaller spectrum bandwidth compared to the larger flagship modems, falling in at only 200MHz. Given that currently in the US mmWave plays an important marketing role in 5G deployments, having any support for the new technology is a must to be able to get device design wins, even though it’s a bit of a contradictory feature to have in low-end cost-sensitive devices.

Then new chip is manufactured on Samsung’s 8nm process node, which should give it very good power efficiency.

Partner vendors included in Qualcomm’s announcement included HMD Global, OPPO and Vivo, endorsing the new chipset. More interestingly, OnePlus was also amongst the vendors to be note the new chipset - maybe that signals the arrival of a new low-end OnePlus device?

Qualcomm expects the first Snapdragon 480 devices to be announced this month.