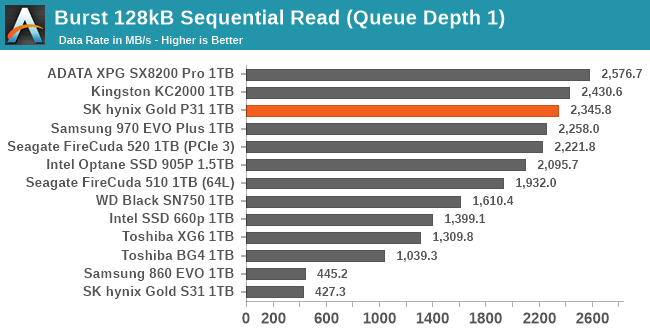 The burst sequential read performance from the SK hynix Gold P31 is very good, but not quite fast enough to beat the drives based on the Silicon Motion SM2262EN controller. 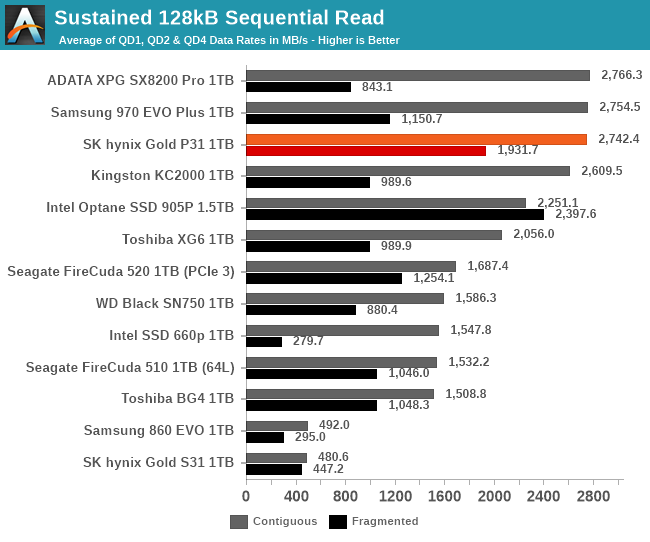 On the longer sequential read test that involves some slightly higher queue depths, the Gold P31 is basically tied for first place when reading data that was written sequentially. When reading data that has previously been fragmented by the random write test, the P31's performance is considerably higher than the other flash-based SSDs and closer to the Optane 905P.

In absolute terms, the power consumption of the Gold P31 isn't drastically lower than some of the other fairly efficient high-end NVMe drives like the WD Black SN750. But once performance is taken into account, the Gold P31's efficiency stands far above the competition.

The SK hynix Gold P31 doesn't need high queue depths to deliver good sequential read throughput: at QD2 it's already above 3 GB/s, but there are further slight performance increases from higher queue depths. That performance profile is very similar to the Samsung 970 EVO Plus, but that drive requires about twice the power that the P31 uses. 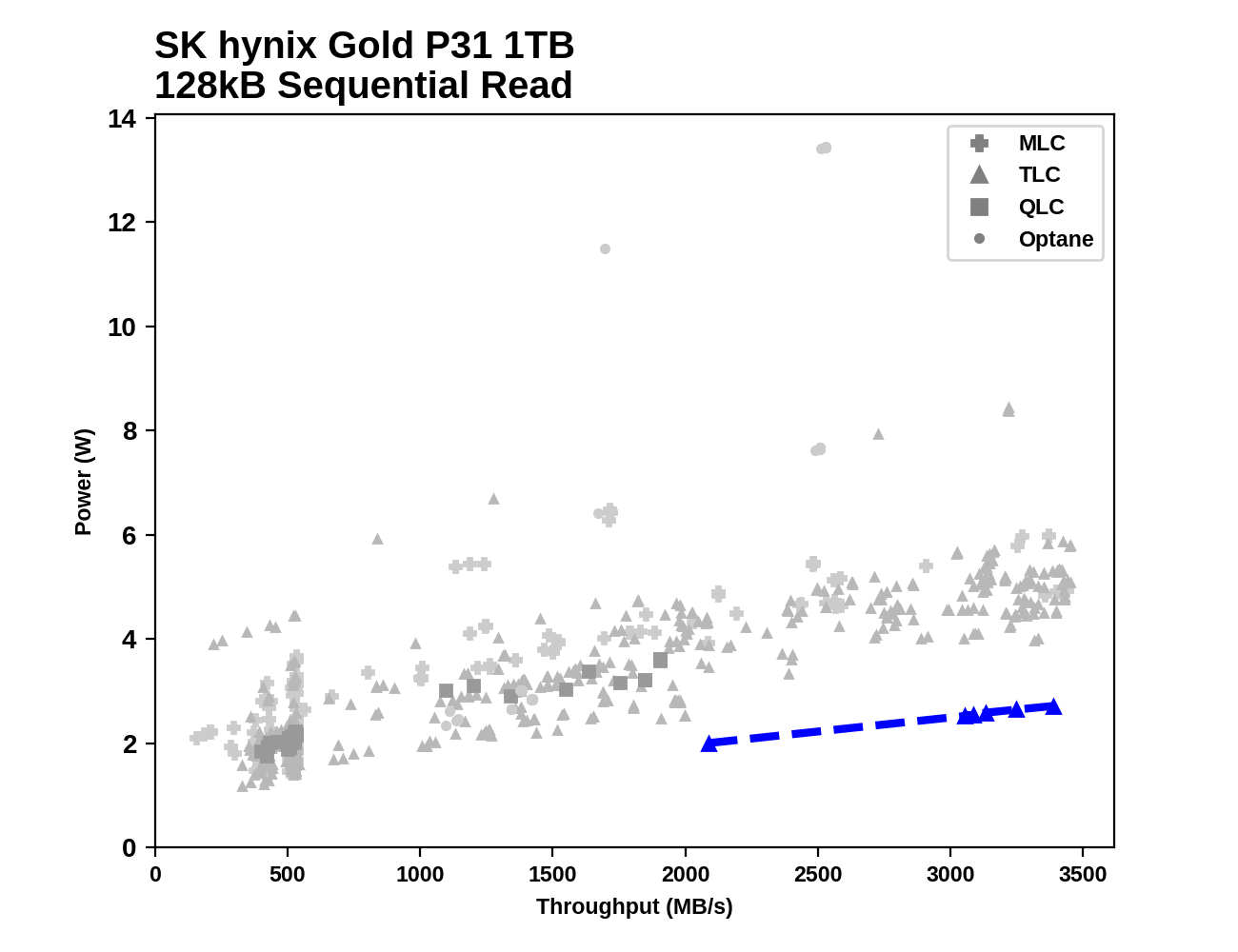 Even at QD1, the sequential read performance from the Gold P31 is above the ~2GB/s limit of most other four-channel NVMe drives we've tested (with eg. Silicon Motion SM2263 based controllers). That leaves it entirely in a performance range where all the competitors are 8-channel drives that don't come close to matching power efficiency of the Gold P31. 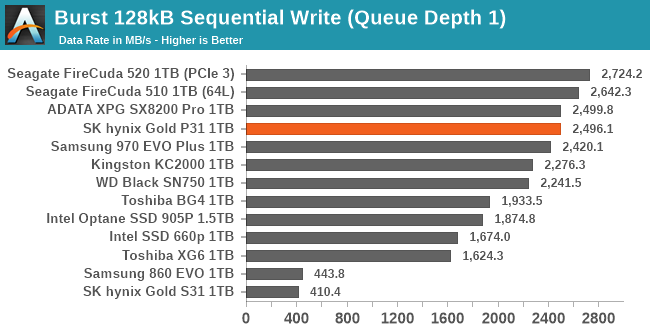 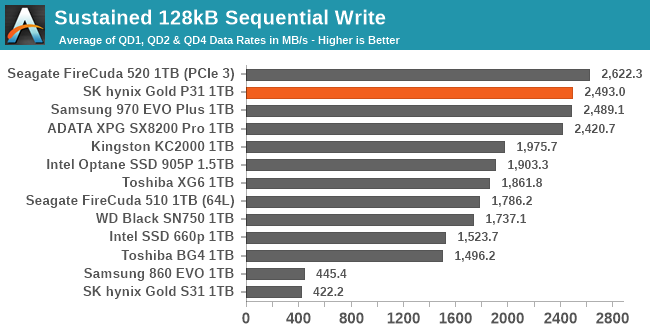 On the longer sequential write test that brings in higher queue depths, the Gold P31 is tied for second place, while the Phison E16 based Seagate drive (built for PCIe 4 speeds, but limited by this testbed to PCIe 3 speeds) unsurprisingly takes first place.

At this point, the record-shattering power efficiency scores from the SK hynix Gold P31 are no longer a surprise. The overall fastest drive has the second best efficiency score (56% the performance per Watt of the P31) and the next two most efficient drives are much slower NVMe drives from Toshiba/Kioxia.

The Gold P31 doesn't reach its full sequential write speed until QD4, while several of its competitors saturate at QD2. However, once the P31 is at full speed, it has one of the best sustained write speeds, and shows no sign of its SLC cache running out at any point during the test. Power consumption is comparable to the slowest NVMe drive that can barely hit half the throughput of the Gold P31. 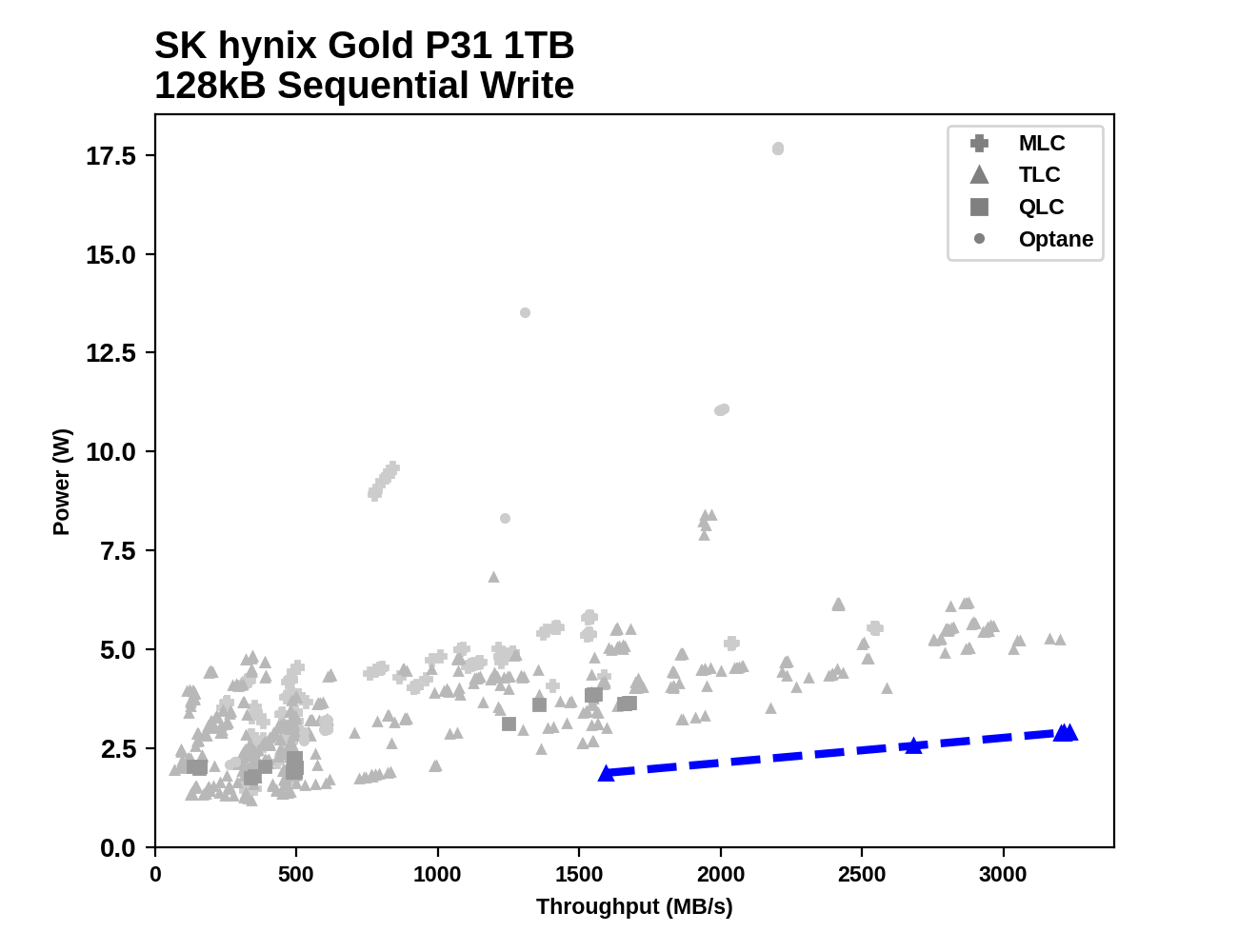 Similar to the sequential read results, the P31 starts out at QD1 with high performance that almost puts it beyond what other 4-channel NVMe drives can do at any queue depth. From there, the P31 continues to redefine what's possible with an increasingly wide lead in power consumption relative to all other high-end drives we've tested.