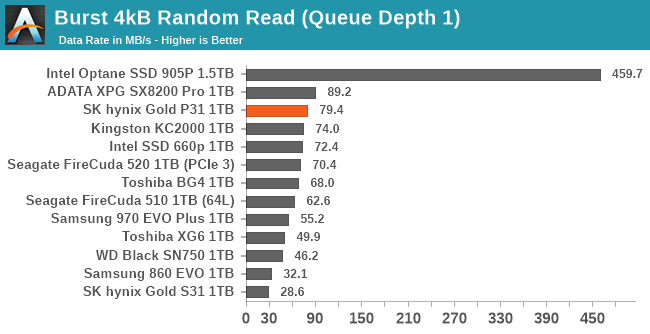 The QD1 burst random read performance of the SK hynix Gold P31 is similar to what we see from drives using the Silicon Motion SM2262EN controller, which has dominated this test since it hit the market. 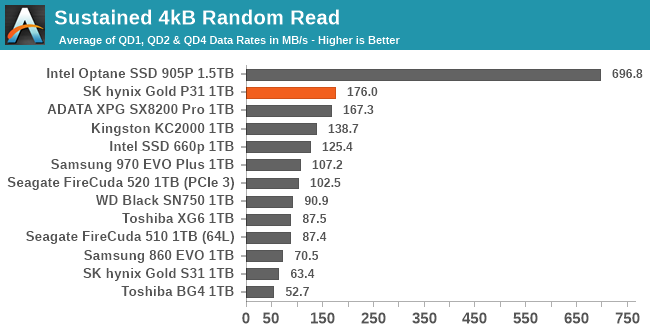 On the longer random read test that reaches into higher queue depths, the Gold P31 pulls narrowly ahead of the SX8200 Pro to set a new record for TLC-based SSDs.

The power draw of the Gold P31 is only a hair above that of its SATA sibling, the Gold S31. But the P31 is delivering almost three times the performance of that drive, and twice the performance per Watt of the next most efficient drive.

The Gold P31 delivers class-leading performance across the entire range of queue depths covered by this test. Its performance is starting to taper off by QD32, but at that point it has caught up with the throughput of the Optane 905P. The widest margins over other TLC SSDs are around QD8 through QD16. Power consumption remains very low throughout the test, not even reaching 2W at QD32 - that 2x efficiency advantage over the competition remains just as true at high queue depths. 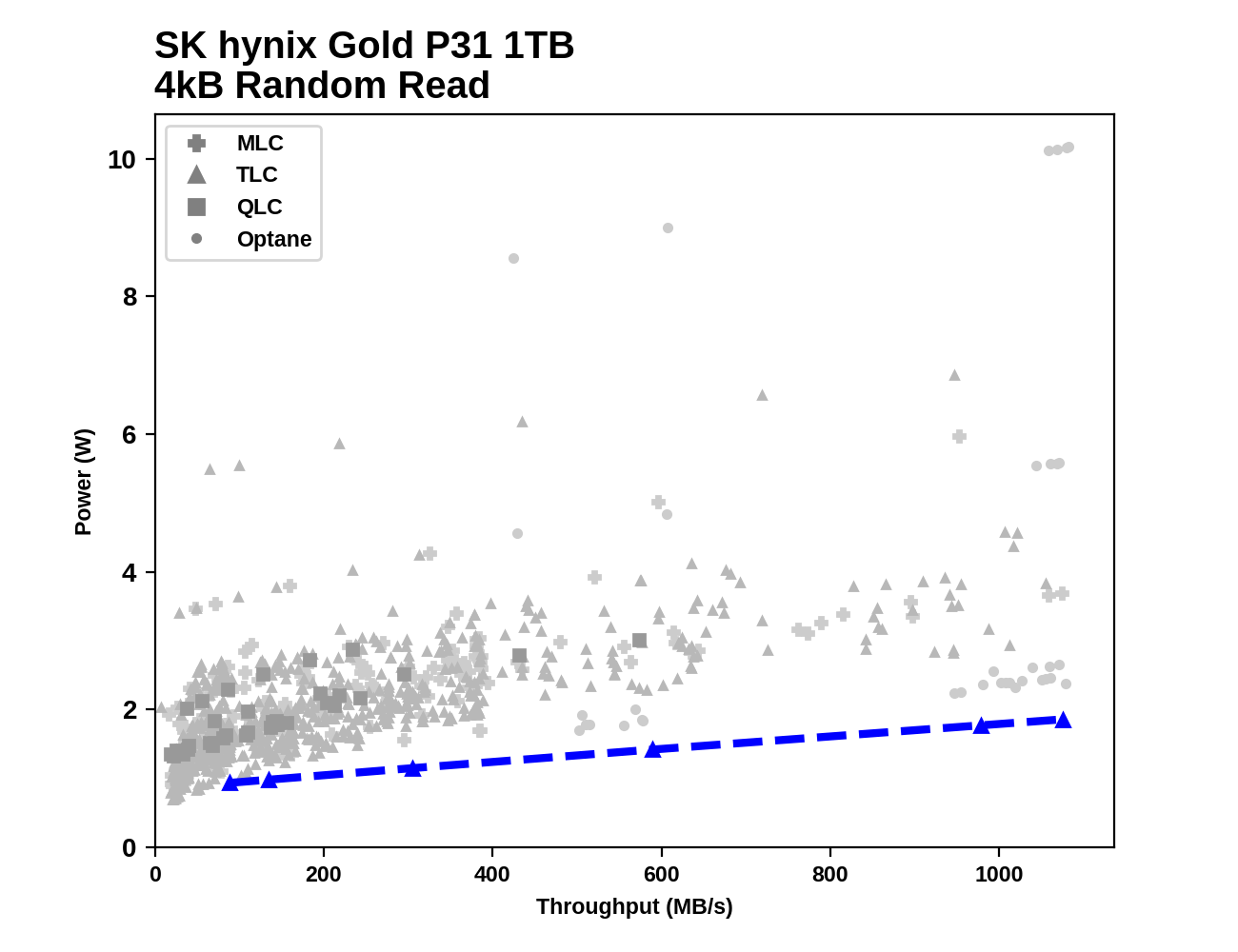 Plotting the P31's results against the entire benchmark database shows that the P31 stakes out new territory. The closest competition on the power/performance landscape are the tiny Intel Optane Memory M.2 drives, and at QD4 or higher all the other flash-based SSDs need considerably more power to deliver the same performance (at QD4 and below, the P31 is still in SATA performance territory where there are more low-power competitors). 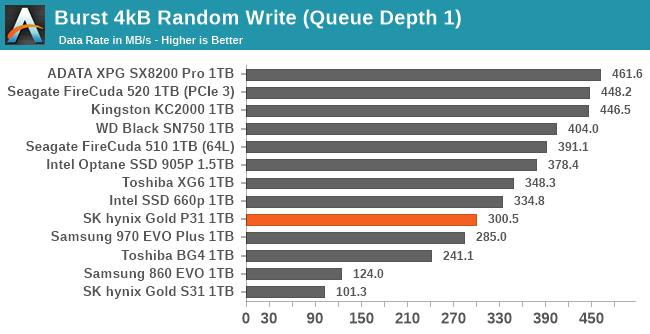 The burst random write performance of the Gold P31 is lackluster: slower than most high-end NVMe drives, though actually still a bit faster than the Samsung 970 EVO Plus. 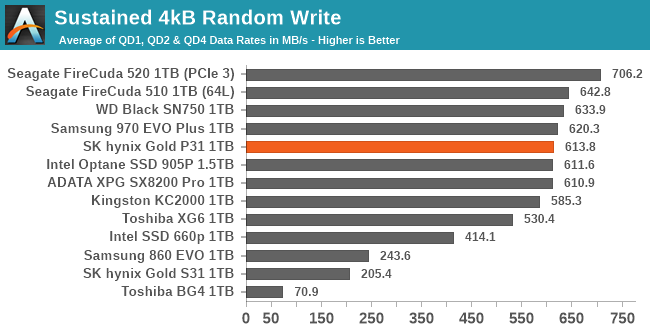 On the longer random write test that includes some higher queue depths, the high-end NVMe drives mostly have fairly similar scores, and the P31 falls in the middle of the pack for performance.

Once again, the power consumption of the Gold P31 is more in line with low-power SATA or DRAMless NVMe drives, even though it offers high-end performance. This time, the efficiency score isn't quite twice that of the next best competitor, but a 75% improvement is still impressive.

The performance profile for the Gold P31 on the random write test is fairly typical: fill performance is reached at QD4, and performance is mostly steady through the rest of the test. The P31 starts out slightly slower at QD1, but at full speed it is definitely competitive. 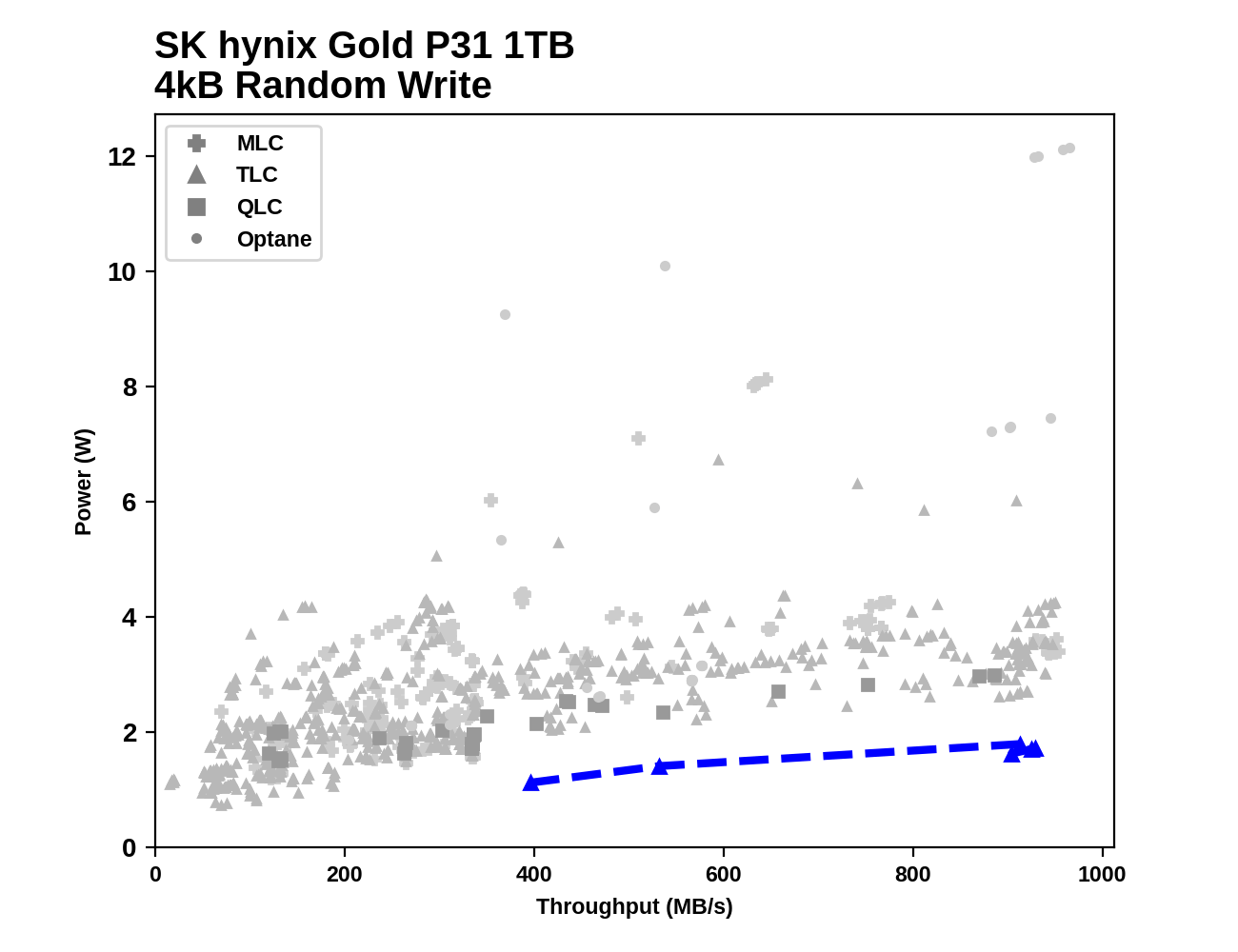