For the launch of Intel's Comet Lake desktop processors and the LGA1200 socket, ASRock has just one mini-ITX model in its arsenal in the way of the ASRock Z490 Phantom Gaming ITX/TB3. With official support for Thunderbolt 3 via a Type-C port on the back panel, it also includes an 8-phase power delivery, has two PCIe 3.0 x4 M.2 slots, as well as four SATA ports. Also featured is an Intel Wi-Fi 6 wireless interface with BT 5.1 support, and a Realtek based 2.5 G Ethernet controller. It represents a premium small form factor offering on the Z490 chipset, which is one of just a small handful of mini-ITX models on the LGA1200 socket at present. 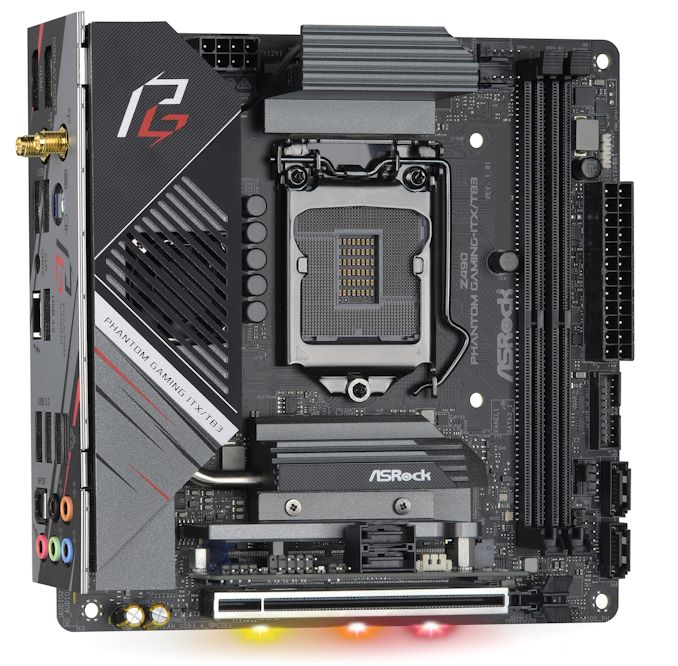 Due to the limitations of a small form factor such as mini-ITX, the ASRock Z490 Phantom Gaming ITX/TB3 has a single PCIe 3.0 x16 slot, with two PCIe 3.0 x4 M.2 slots, one on the front underneath a heatsink, and another located on the rear of the board. There are also four SATA ports which support RAID 0, 1, 5, and 10 arrays. Memory support is usually strong on mini-ITX models, and the Z490 Phantom Gaming ITX/TB3 has support for up to 64 GB of DDR4-4666 memory in dual channel. The power delivery is also high-end with a 6-phase power delivery with the CPU controlled by an ISL69269 PWM controller and consists of six Intersil 90 A power stages. Cooling both the 6-phase CPU power delivery is a heatsink which doubles up as a rear panel cover, with a single heat pipe connecting it to the chipset and M.2 slot heatsink.

Typically well-known for its solid mini-ITX desktop-based models, the ASRock Z490 Phantom Gaming ITX/TB3 delivers once again when compared to previous versions such as the AMD ASRock X570 Phantom Gaming ITX/TB3 which we previously reviewed. Combining Thunderbolt 3 support in a small frame, with dual PCIe 3.0 x4 M.2 slots and four SATA ports does offer plenty of support for users building a mini-ITX Z490 based system. Content creators will appreciate Thunderbolt 3, while gamers and enthusiasts will also appreciate the 90 A DrMOS power stages and the large power delivery heatsink. Currently, there is no set price for the Z490 Phantom Gaming-ITX/TB3  but we will update this as more information is available.