The ASRock Z490 PG Velocita is one of two Phantom Gaming branded models for Z490 at launch and is very well versed for enthusiasts and gamers. It includes a decent 10-phase power delivery for the CPU, support for Intel Rocket Lake with a PCIe 4.0 clock generator, as well as two full-length PCIe 3.0 slots, support for up to 128 GB of DDR4-4666 memory, and it also includes a 2.5 G Ethernet controller. 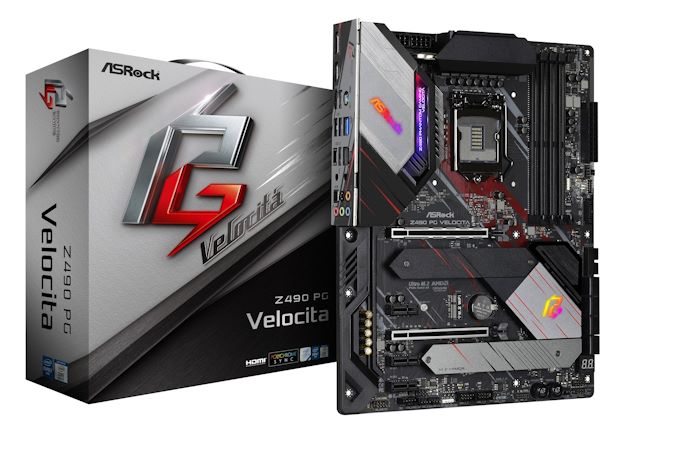 The design is similar to previous Phantom Gaming models with black and grey heatsinks, with red accents. ASRock has included two zones of integrated RGB LEDs onto the PG Velocita, with an RGB ASRock logo and backlit area on the rear panel cover, as well as an RGB Phantom Gaming logo on the chipset heatsink. All the boards RGB including the two aRGB and two RGB LED connectors can be customized via the ASRock Polychrome RGB software. 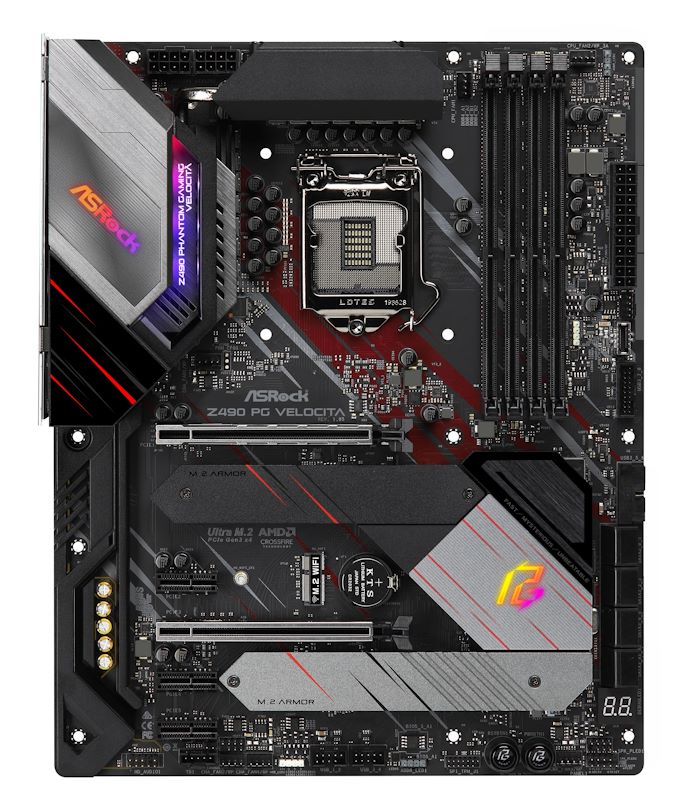 It has two full-length PCIe 3.0 slots which operate at x16+4, with three PCIe 3.0 x1 slots. ASRock's spec sheet isn't very clear on support, but it does state support for 10th generation Comet Lake desktop processors and 'future' Intel Core processors which is Rocket Lake. The top full-length PCIe slot is PCIe 4.0 ready, as well as the PCIe M.2 slots, with an onboard PCIe 4.0 clock generator. Touching on the storage, there's two PCIe 3.0 x4 M.2 slots, with six SATA ports from the chipset, and a further two SATA ports provided which are controlled by an ASMedia ASM1061 controller. This means six of the eight available SATA ports support RAID 0, 1, 5, and 10 arrays.

For the power delivery, ASRock is using a 10+2+1 power delivery, with 50 A DrMOS power stages and 12K DIP capacitors. Providing power is a pair of 8-pin 12 V ATX CPU power inputs. The power delivery itself is cooled by a pair of large finned heatsinks which are joined together by a single heat pipe. On the top heatsink, ASRock has included two small cooling fans to aid in dissipating heat from the power delivery, while the rear panel cover incorporates a single fan into the design of the other heat sink. ASRock recommends users cool this model with water cooling to avoid mechanical conflicts with certain air coolers, for optimal cooling performance on Intel's 10th Gen processors.

On the rear panel is one USB 3.2 G2 10 Gbps Type-C, one USB 3.2 G2 10 Gbps Type-C, and four USB 3.2 G1 ports. Included on the board is a PCIe Key-E M.2 slot with two antenna ports on the rear panel, but doesn't include a wireless interface. Users can opt to purchase their own wireless interface providing it is M.2 Key-E 2230. Included for networking, it has two Ethernet ports, one powered by a Realtek RTL8125BG 2.5 G, and the other by an Intel I219-V Gigabit controller. The five 3.5 mm color-coded audio jacks and S/PDIF optical output are controlled by a Realtek ALC1220 HD audio codec, while the board also has a pair of video outputs including a DisplayPort 1.4, and an HDMI port. Finishing off the rear panel is a PS/2 keyboard and mouse combo port.

The ASRock Z490 PG Velocita is a new model in its line-up, with similar aesthetics to its existing Phantom Gaming range, and caters to the mid-range. Primarily targeting gamers, it has plenty about it to make it a premium mid-range offering with 2.5 G Ethernet, a Realtek ALC1220 HD audio codec, and support for two-way AMD Crossfire support. ASRock hasn't yet unveiled a price for the Z490 PG Velocita, but we will update this as more information is available.