ASUS has a pretty stacked Z490 line-up, which represents multiple key market areas for desktop users. It's gaming and enthusiast specific Republic of Gamers brand makes an appearance with a couple of interesting boards, with more ROG Z490 models set to be launched at a later date. Other brands include the TUF Gaming which is its entry-level offering for gamers, its Prime series which are aimed more at professional users with clean-cut aesthetics, and its ProArt range which caters to content creators. 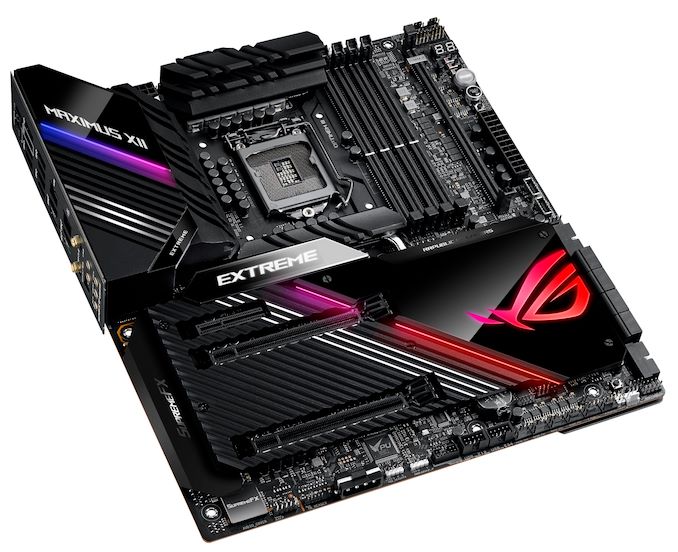 The ASUS ROG Maximus XII Extreme will feature support for up to DDR4-4700 memory with four slots supporting up to 128 GB of capacity. It has two full-length PCIe 3.0 slots which operate at x16 and x8/x8, with a half-length PCIe 3.0 x4 slot. It looks to have a wave of aluminium armour stretching around the PCIe slot area, with a black and silver design. There are four PCIe 3.0 x4 slots with two of the slots supporting M.2 22110 and two M.2 2280 form factor drives. It looks as though two of the M.2 slots will be present on the board, with the additional two coming via an included ROG.DIMM.2 M.2 add-on card. It has eight SATA ports with support for RAID 0, 1, 5, and 10 arrays.

Networking support is also impressive, which consists of an Aquantia AQC107 10 G Ethernet controller, with a second Ethernet port controlled by an Intel I225-V 2.5 G. Another addition is an Intel AX201 Wi-Fi 6 wireless interface with support for BT 5.1. Included in the specifications is a Thunderbolt EX 3-TR card which will come in the accessories bundle, with two USB 3.2 Type-C front panel headers. Controlling the audio will be a SupremeFX S1220 HD audio codec which provides five 3.5 mm audio jacks and a single S/PDIF optical output. From what we can see on the rear panel, there are two USB 3.2 G2 Type-A, six USB 3.2 G1 Type-A, and two USB 2.0 ports, and a Clear CMOS and BIOS Flashback button.

ASUS hasn't provided details on when we might see the ROG Maximus XII Extreme model to hit retail shelves, but it has set an MSRP of $750 which puts it as one of the most expensive Z490 models to date.