ASUS has also announced it will be releasing its ROG Maximus XII Formula, but not announced a full breakdown of what it will include. Typically famous for its inclusion of EKWB VRM MOSFET heatsinks, the Maximus XII Formula will come with a 16-phase teamed power delivery for the CPU, which is using 60 A power stages. It will also feature EK Crosschill III Hybrid heatsinks, with a large PCIe slot cover and rear panel cover with integrated RGB LEDs.

The ASUS ROG Maximus XII Formula will come with a sleek black and silver aesthetic, which is largely dominated by its PCIe slot area armor, with plenty of features on-board. It has three full-length PCIe 3.0 slots which run at x16, x8/x8, and x8/x8/+4, with a single PCIe 3.0 x1 slot. For storage is three PCIe 3.0 x4 M.2 slots, each with its own individual heatsink, and six SATA ports with support for RAID 0, 1, 5, and 10 arrays. 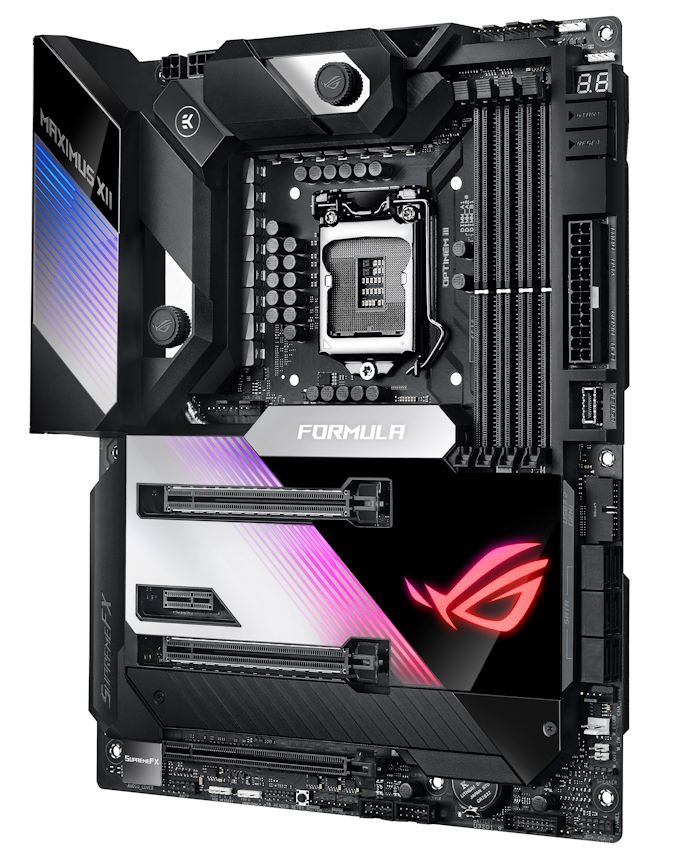 Included is an overclocker's toolkit which consists of a reset and power button, with a 2-digit Debug LED. Looking at the memory support, it will feature four memory slots with support for up to DDR4-4700, with a total capacity of up to 128 GB.

For connectivity, the ASUS ROG Maximus XII Formula will include Thunderbolt 3 support via an internal TB header and has a solid networking setup. It includes an Aquantia AQC107 10 G Ethernet controller, with an additional Intel I225-V 2.5 G controller for dual LAN. Also present is an Intel AX201 Wi-Fi 6 wireless interface with support for BT 5.1 devices. Powering the boards onboard audio is a SupremeFX S1220 HD audio codec.

While it isn't clear when the ASUS ROG Maximus XII Formula is going to be released, ASUS has set an MSRP of $500 which given its previous premium models, is quite a fair price all things considered; with what we know so far.