One of the most fascinating Z490 models is the ASRock Z490 Phantom Gaming 4SR, which is also the first Z490 motherboard to feature the ATX12VO standard. This removes the clunkier ATX12V power connector and opts for a smaller ATX12VO connector which supplies just 12 V into the motherboard, with a lot of 5 V and 3.3 V standards which are rarely used nowadays. On top of this, the Z490 Phantom Gaming 4SR includes a single PCIe 3.0 x4 M.2 slot, four SATA ports, and two full-length PCIe 3.0 slots, with an Intel Gigabit Ethernet port too. 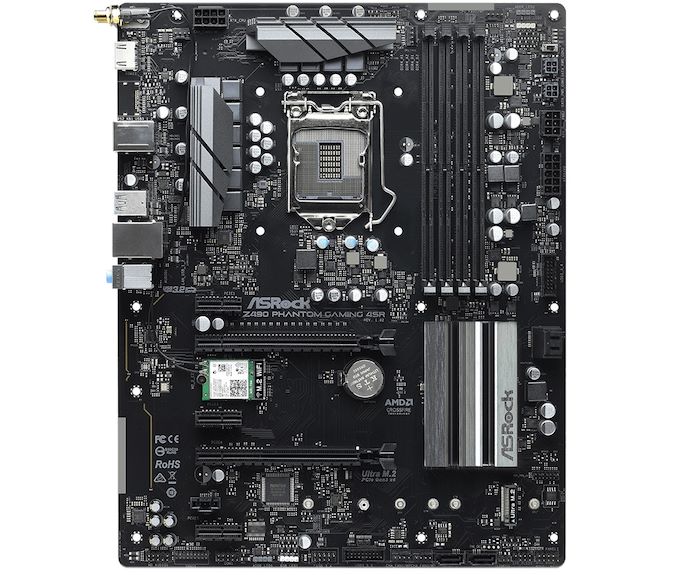 The ASRock Z490 Phantom Gaming 4SR is basic in design, with silver heatsinks on a black PCB, and is advertised as featuring a 10-phase power delivery. The lower portion of the board includes two full-length PCIe 3.0 slots which run at x16/+4, with three PCIe 3.0 x1 slots, and has a solitary PCIe 3.0 x4 M.2 slot. There are also four SATA ports with support for RAID 0, 1, 5 and 10 arrays, with four memory slots with support for up to 128 GB of DDR4-4000. Providing power to the board is an ATX12VO set of connectors including a 10-pin, 8-pin, and 6-pin power input trio, with a single 8-pin 12 V ATX CPU input providing power to the processor.

Pricing on the ASRock Z490 Phantom Gaming isn't currently known, but it's not likely to be expensive. It also marks the introduction of ATX12VO onto a mainstream socket. Current availability isn't known at this time, but it could be a case of waiting for power supply vendors to respond with consumer options.