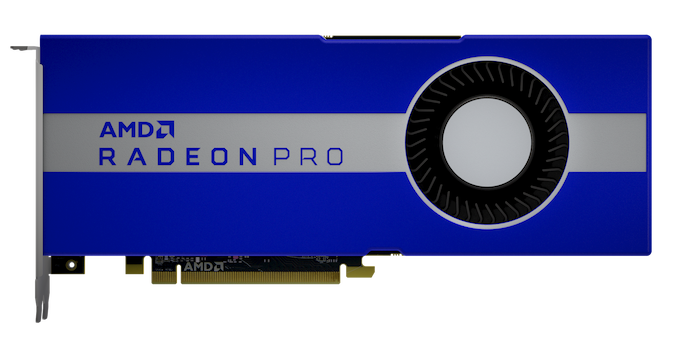 Taking a break from their recent run of consumer-focused video card launches, this morning AMD is turning their attention to the professional side of the market. With their new Navi GPUs and the underlying RDNA architecture in hand, the company is now looking to apply that technology to their workstation video cards, which have been and continue to be an important facet of AMD’s overall GPU business. To that end, today AMD is announcing the first Navi-based Radeon Pro card, the Radeon Pro W5700.

From a high level perspective, the W5700 can be thought of as the workstation analog to AMD’s consumer Radeon RX 5700 (XT). And indeed, that’s even the direction AMD is taking with the entire Radeon Pro W series lineup. Starting with this generation, AMD’s model numbers are now going to match their consumer part numbers, beginning with the W5700 and presumably being fleshed out farther down the line to include the likes of the W5500 and W5300. This follows years of using names like W9000, W9100, and WX 9100, which have been wholly detached from the rest of AMD’s video cards.

For AMD, the change in naming and positioning comes as the company is looking to build on the goodwill from and the messaging they’ve already done for the RDNA architecture as part of the Radeon RX 5000 series launch. RDNA is the heart and soul of AMD’s current generation and future generation GPUs, and AMD wants potential customers across all of their markets knowing that, and what RDNA brings to the table. 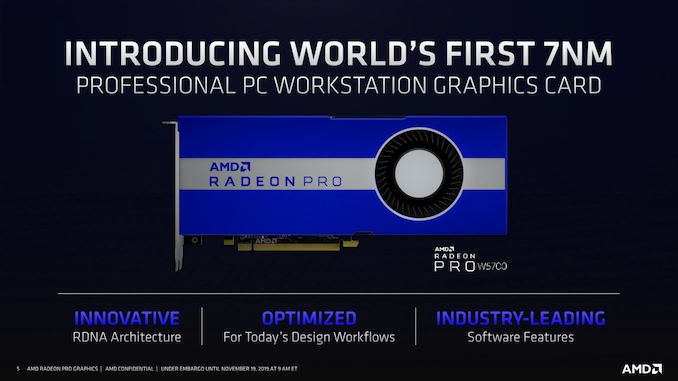 Though make no mistake, the card’s product number may have “5700” in it and specifications close to the RX 5700 series, but it’s still very much its own card. AMD has developed a separate board just for the W5700, with specific accommodations just for the workstation market. So while the naming is aligned, AMD isn’t just slapping a coat of (pretty) blue trim on an RX 5700.

At any rate, AMD is looking to use Navi and the RDNA architecture to do for workstation graphics what it’s already done for consumer graphics: significantly boost AMD’s performance and power efficiency through the combination of RDNA and TSMC’s 7nm process. 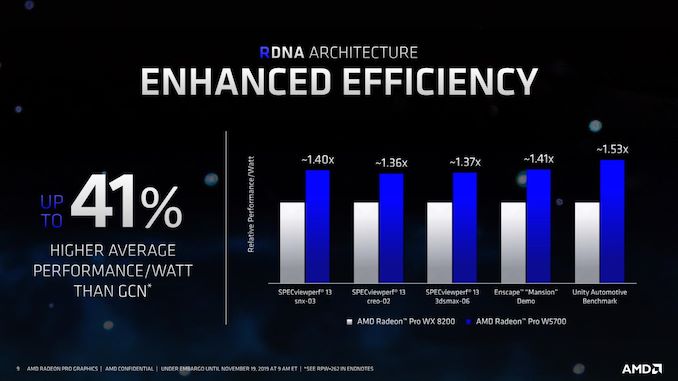 Briefly, RDNA incorporates a number of changes to AMD’s core GPU architecture in a bid to improve IPC and the resulting efficiency – to get more work done out of its wide array of compute/shader hardware, and to do so while consuming less power. The biggest advancement here is a roughly 25% improvement in IPC over the Vega (GCN 5) architecture. Which combined with the other changes gives the W5700 a 41% perf-per-watt advantage over the last-generation WX 8200, according to AMD. RDNA also brings several other changes to AMD’s hardware that improve its efficiency and overall throughput, including a reworked geometry engine, an updated display engine block, and PCIe 4.0 compatibility.

For the W5700 then, AMD is using their latest round of improvements to focus on getting the card into the hands of real time visualization and VR users. While traditional CAD/CAM remains an important area for AMD, the company feels that those markets can now be served by even entry-level parts – almost no one is throwing five-thousand line shaders at CAD – so instead AMD’s focus is on what the company considers emerging workloads in the professional market; workloads that require more 3D rendering performance. 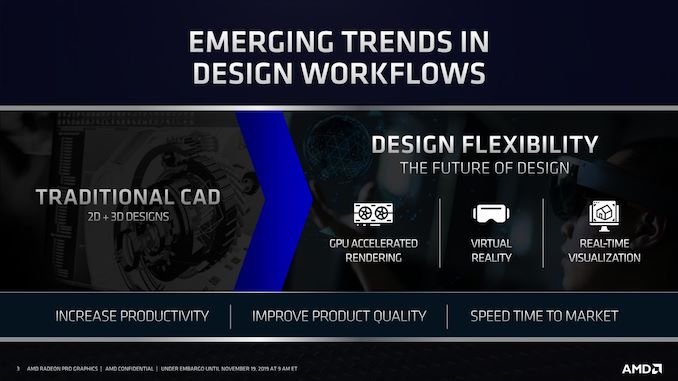 To get there, AMD has taken the Navi 10 GPU, and build a workstation-level card around it with a few tweaks to better fit the kinds of workloads the company has in mind.

With regards to specifications, the W5700 is essentially somewhere between AMD’s RX 5700 and RX 5700 XT cards. The card’s Navi 10 GPU ships with 36 CUs enabled – so not quite a fully-enabled GPU – similar to the RX 5700. However with a boost clock of 1930Mhz, it’s clocked a lot higher than the RX 5700, edging out even the RX 5700 XT, delivering a peak single precision (FP32) compute throughout of 8.89 TFLOPS. And while this is actually quite a bit less than what the existing Radeon Pro WX 9100 and WX 8200 deliver on paper, RDNA’s focus on efficiency means that W5700 and other RDNA cards achieve much better hardware utilization, coming a whole lot closer to their theoretical peaks. Which is why, as in the case of AMD’s consumer cards, theoretical FLOPS aren’t a very good comparison between RDNA parts and earlier GCN parts.

Meanwhile, moving from the front end to the back end of the GPU pipeline, the W5700 gets a full 64 ROP configuration. This coupled with its higher clockspeeds means that W5700 is capable of pushing a good deal more pixels than any of the previous WX series Radeon Pro cards, giving the card an important advantage in the pixel-heavy workloads like VR that AMD is envisioning for the card.

Feeding all of this is the same series of GDDR6 memory controllers that we’ve seen in AMD’s consumer cards. The jump from GDDR5 to GDDR6 has given AMD a once in a generation boost in memory bandwidth for mid-range cards like the W5700, improving bandwidth by 75% for a 256-bit memory bus card such as this. Ultimately it allows AMD to keep rough parity with the likes of their higher-end cards like the last-generation WX 8200, which had the benefit of more expensive HBM2 memory. I am a bit surprised that AMD stuck with just 8GB of memory here, as it’s typical for Pro cards to go a bit heavier, but it’s a configuration choice that’s ultimately driven by pricing for the new memory versus keeping the card’s total price reasonable, as well as the expected workloads.

As for power consumption, the TDP for the new card lands at 205W. This is right about where AMD’s other Navi 10-based products have been landing, and a bit less than the 230W that the WX 8200 was pulling, which is the closest ancestor to the W5700. With that said, because the card offers a USB-C port for VR headsets (more on that in a sec), the card’s rated TDP is a bit higher than its actual graphics TDP. According to AMD, the card should max out at around 185-190 Watts in graphics workloads, as the final 15W is to take into account the USB-C port. 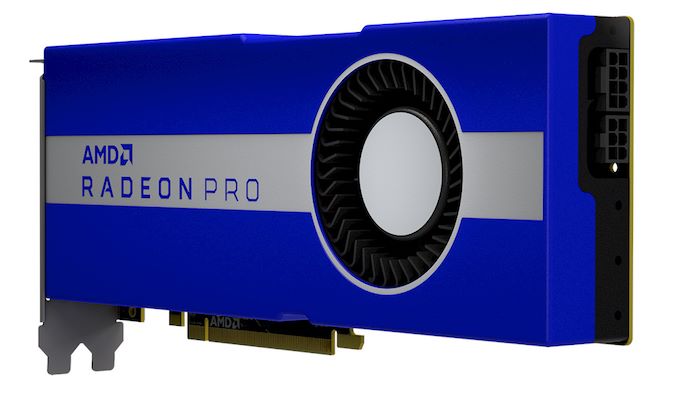 Even then, for power delivery AMD isn’t taking any chances. The card features both a 6-pin and an 8-pin PCIe external power connector, the two of which on their own would be capable of powering the entire card, never mind the PCIe slot power. So to a certain degree, the W5700’s power deliver system is overengineered, giving it plenty of headroom over AMD’s official specifications.

The card itself features a blower cooler and blue paint job, which has been AMD’s traditional design since launching the Radeon Pro line in 2016. Similarly, the card measures 10.5-inches long, so it is fully capable of being used as a drop-in upgrade for existing Radeon Pro workstations, sporting the same size and cooler configuration, along with similar TDPs. 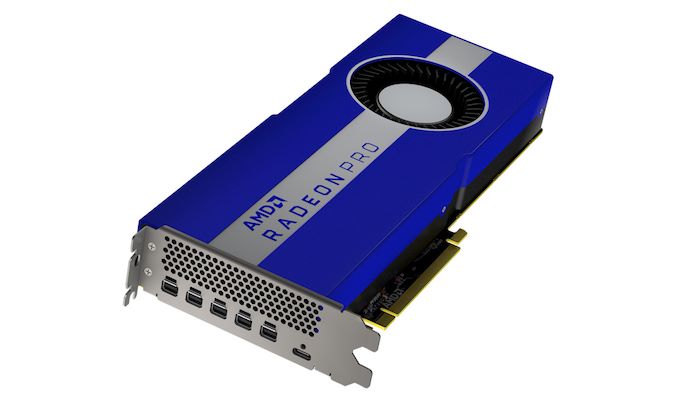 Display I/O has changed a bit from the last generation, however. AMD is still using a large number of Mini DisplayPorts to maximize how many monitors can be plugged into a single card; however instead of 6 ports like the last couple of generations of cards, AMD has switched things up for 5 mDP ports and a single USB-C port. The Mini DisplayPorts get the full benefit of Navi’s new display controller, supporting DP 1.4 with Display Stream Compression (DSC). Meanwhile, the USB-C port can be used for either a 6th monitor or, more optimally, a VR headset, coinciding with the shift in VR headsets to using a USB-C port in a VirtualLink configuration to provide USB data, USB power, and DisplayPort video all in a single connector. Curiously, AMD does not explicitly call this a VirtualLink port (even though they are a founding consortium member), but for it to drive VR headsets then it would have to match VirtualLink’s features regardless.

Speaking of VR, along with tethered options, AMD has confirmed that they’re also going to support untethered (wireless) options via their ReLive hardware encoder platform. Wireless VR will be supported in conjunction with HTC’s enterprise-focused Vive Focus Plus headset, which is normally a stand-alone headset, but it can be used as a PC headset by streaming the output from a workstation over Wi-Fi. Which, although not an ideal VR setup due to the overhead of video encoding, gives the Vive Focus Plus users some additional flexibility when the stand-alone headset’s SD835 isn’t up to the task of complex rendering. 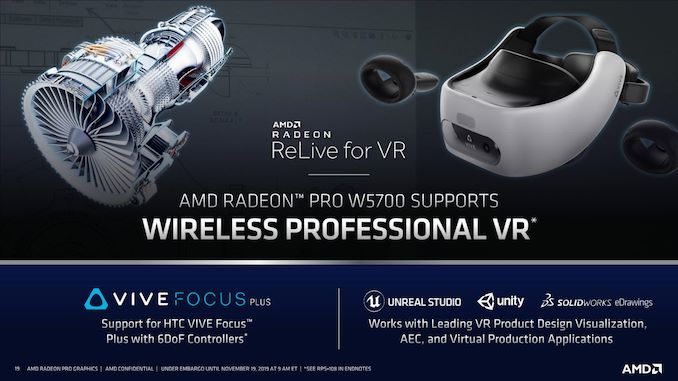 Finally, along with the hardware itself, AMD will continue to flesh out its Radeon Pro offerings with its Radeon Pro software releases. Since 2018 the company has invested in a quarterly release cadence for its Pro software, and the company has confirmed that this will be the case for 2020 as well. So along with this quarter’s software release to mark the launch of the W5700 (19.Q4), there will be 4 more releases in 2020 to follow. Overall AMD seems quite pleased with how their Pro software development strategy has turned out, and they plan to continue leveraging it as an advantage in such a competitive market. 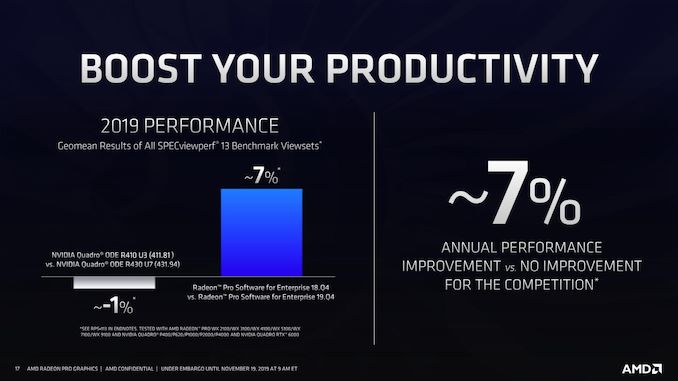 Wrapping things up, today’s release of the Radeon Pro W5700 is a hard launch for AMD – meaning the card should be available today – a rarity for workstation cards. AMD is releasing the card at $799, promoting it as the successor to both the Vega-based Radeon Pro WX 8200 as well as the Polaris-based WX 7100. And, judging from what we’ve seen with their RDNA consumer cards, it should handily beat both.