ASUS's Strix brand represents its more mid-range gaming focused offerings and the ASUS ROG Strix X570-E Gaming is one of two ATX sized Strix branded boards, with the X570-E being the more premium of the two models; the other being the slightly lower spec ASUS ROG Strix X570-F Gaming. Included is support for two-way NVIDIA SLI and up to three-way AMD CrossFire multi-graphics cards configurations, 2.5 Gigabit networking, and a Wi-Fi 6 wireless interface. 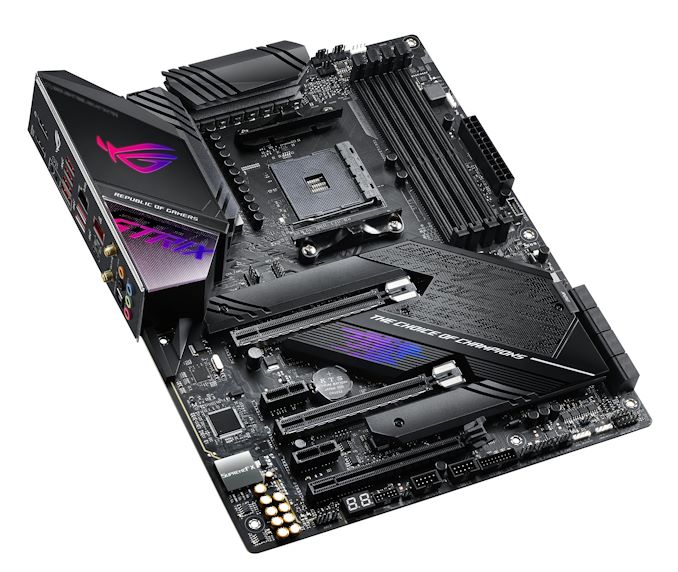 The ASUS ROG Strix X570-E includes the gaming-focused Realtek RTL8125G 2.5 Gigabit NIC with a second port controlled by an Intel I211-AT Gigabit NIC. The board's wireless capabilities come from the new Intel AX200 Wi-Fi 6 802.11ax adapter. The board boasts three full-length PCIe 4.0 slots which operate at x16, x8/x8, and x8/x8/x4, with the final four coming directly from the X570 chipset. The Strix themed chipset heatsink has two M.2 heatsinks emanating from the top and bottom side for the boards dual PCIe 4.0 M.2 and has a cooling fan integrated which is designed to keep the X570 chipset cool. The ROG Strix X570-E also has eight SATA ports and four DDR4 memory slots with support for up to 128 GB.

In terms of USB connectivity on the rear panel, there are three USB 3.1 G2 Type-A, one USB 3.1 G2 Type-C, and four USB 3.1 G1 Type-A ports. A SupremeFX S1220 HD audio codec powers the five color-coded 3.5 mm jacks, and an S/PDIF optical out, while a pair of video outputs consisting of an HDMI 2.0 and DisplayPort 1.2 output is featured. A handily located BIOS Flashback button and a single USB 3.1 G1 Type-A dedicated to this are clearly highlighted, and the ROG Strix X570-E also benefits from dual Ethernet ports with one being controlled by a Realtek RTL8125-CG 2.5 Gigabit NIC, while the other is driven by an Intel I1211-AT Gigabit NIC. There are also two antenna inputs for the Intel AX200 802.11ax Wi-Fi 6 wireless interface which also adds BT 5 connectivity into the mix.

The ASUS ROG Strix X570-E Gaming has an MSRP of $330 and represents its bridge between the mid-range and the higher end Crosshair VIII models. With Wi-Fi 6, 2.5 Gigabit + 1 Gigabit NICs and a SupremeFX S1220A HD audio codec and two-way NVIDIA SLI support, users looking for a high-quality ASUS X570 model may not have to look further than the Strix X570-F.