One of the biggest surprises during Computex as far as the announcement of the X570 went was the unveiling of the ASUS ROG Crosshair VIII Impact. Based on the uncommon mini-DTX form factor which is similar to mini-ITX, but with a slightly longer frame, allows ASUS to add an extra expansion slot onto the PCB without sacrificing too much on the overall size of the board. The ROG Crosshair VIII Impact is focused on performance but still offers gaming-focused features along with the rest of ROG/Strix X570 branded product stack. 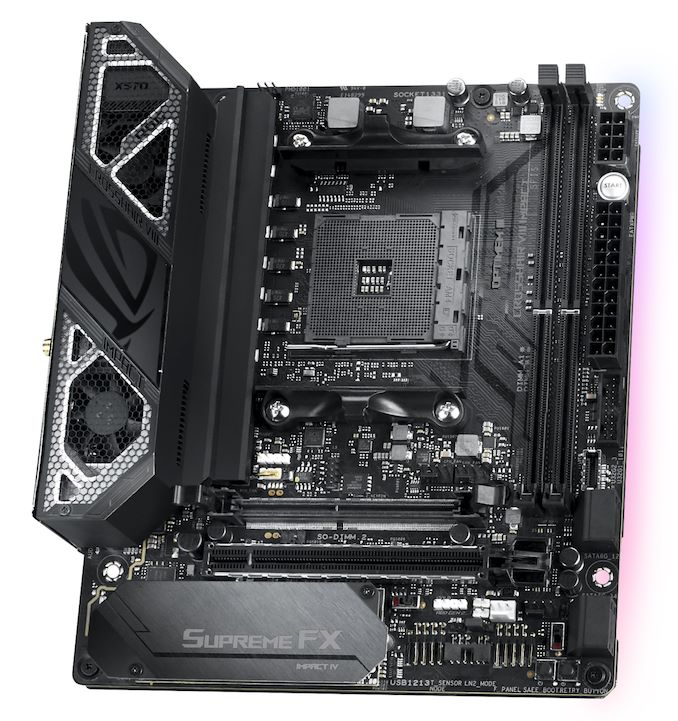 Included on the ASUS ROG Crosshair VIII Impact is a SO-DIMM.2 slot for PCIe 4.0 M.2 drives, with enough space to spare to add a heatsink too. Featured is a full-length PCIe 4.0 x16 slot which is coated with ASUS Steelslot armor reinforcement. Also featured in addition to the dual PCIe 4.0 M.2 slots are four SATA ports. The same case with the memory as the Crosshair VIII Impact has two memory slots with support for up to 64 GB of DDR4 memory.  The design itself follows a more subtle ROG theme with an-all black PCB, black heatsinks and a mesh rear panel cover which features three cooling fans to keep the X570 chipset cool within the rear panel cover. There are also multiple RGB LED lighting zones which users can customize via the ROG Aura Sync software.

Apologies about the blurry image, we will update when we receive a better one

The rear panel of the ASUS ROG Crosshair VIII Impact includes five USB 3.1 G2 Type-A, a single USB 3.1 G2 Type-C, and two USB 3.1 G1 Type-A ports. There are two antenna ports for the Intel AX200 Wi-Fi 6 802.11ax wireless interface, while the single Ethernet port is powered by an Intel I211-AT Gigabit NIC. Also featured is a reset CMOS switch, an LED debug, and a BIOS Flashback button. On the networking side is an Intel I122-AT Gigabit powered Ethernet port, and also includes the new Intel AX200 Wi-Fi 6 enabled wireless interface which features support for BT 5 devices. A Realtek SupremeFX S1220 HD 8-channel audio codec offers three 3.5 mm audio jacks and is assisted by an ESS ES9023P HD DAC which is one of the better spec onboard audio setups on the X570 chipset.

ASUS looks to have put a lot of faith in AMD's new Ryzen 3000 series processors by reintroducing a series that held so much weight in the mini-ITX desktop space. The Crosshair VIII Impact isn't likely to be cheap, however, but as it stands, there is no current MSRP at time of writing.