Frequency Analysis: Cutting Back on AVX2 vs Kaby Lake

Analyzing a new CPU family as a mobile chip is relatively difficult. Here we have a platform that is very much hamstrung by its thermal settings and limitations. Not only that, the BIOS adjustments available for mobile platforms are woeful in comparison to what we can test on desktop. This applies to the Intel NUC that came to retail in December as well as the Lenovo Ideapad E330-15ICN that we have for testing.

The issue is that for a 15W processor, even when built in a ’35 W’ capable environment, might still hit thermal limits depending on the configuration. We’ve covered why Intel’s TDP often bares little relation to power consumption, and it comes down to the different power levels that a system defines. It can also depend a lot on how the chip performs – most processors have a range of valid voltage/power curves which are suitable for that level of performance, and users could by chance either get a really good chip that stays cool, or a bad chip that rides the thermal limits. Ideally we would have all comparison chips in a desktop-like environment, such as when we tested the ‘Customer Reference Board’ version of Broadwell, which came in a desktop-like design. Instead, we have to attach as big of a cooling system as we can, along with extra fans, just in case. Otherwise potential variations can affect performance.

For our testing, we chose Intel’s Core i3-8130U mobile processor as the nearest competition. This is a Kaby Lake dual core processor, which despite the higher number in its name is using the older 14nm process and older Kaby Lake microarchitecture. This processor is a 15W part, like our Cannon Lake Core i3-8121U, with the same base frequency, but with a slightly higher turbo frequency. Ultimately this means that this older 14nm processor, on paper, should be more efficient than Intel’s latest 10nm process. Add on to this, the Core i3-8130U has active integrated graphics, while the Cannon Lake CPU does not.

Because both CPUs have turbo modes, it’s important to characterize the frequencies during testing. Here are the specifications and turbo tables for each processor:

The Cannon Lake processor loses frequency as the cores are loaded, and severely loses frequency when AVX2/AVX512 is applied based on our testing. Comparing that to the Kaby Lake on Intel’s mature 14nm node, it keeps its turbo and only loses a few hundred MHz with AVX2. This part does not have AVX512, which is a one up for the Cannon Lake.

The biggest discrepancy we observed for AVX2 was in our POV-Ray test. 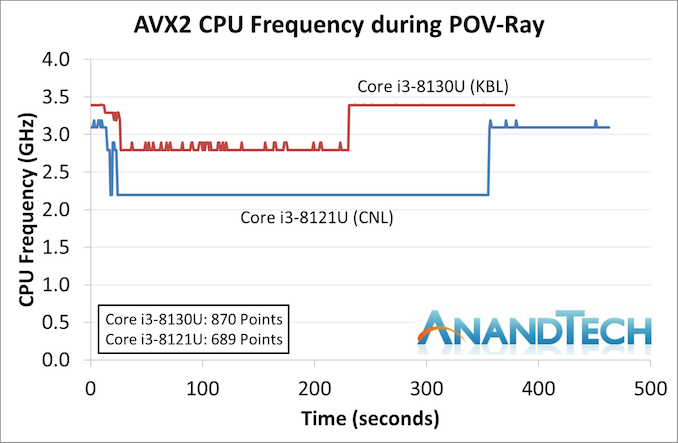 Here the Kaby Lake processor sustains a much higher AVX2 frequency, and completes the test quicker for a 26% better performance. This doesn’t affect every test as we’ll see in the next few pages, and for AVX-512 capable tests, the Cannon Lake goes above and beyond, despite the low AVX-512 frequency. For example, at 2.2 GHz, the Kaby Lake chip scores 615 in our 3DPM test in AVX2 mode, whereas the Cannon Lake chip scores 3846 in AVX512 mode, over 6x higher.

The system we are using for the Core i3-8130 is ASUS’ PN60 Mini-PC. This device is an ultra-compact mini-PC that measures 11.5mm square and under 5cm tall. It is just big enough for me to install our standard Crucial MX200 1TB SSD and 2x4GB of G.Skill DDR4-2400 SO-DIMMs. 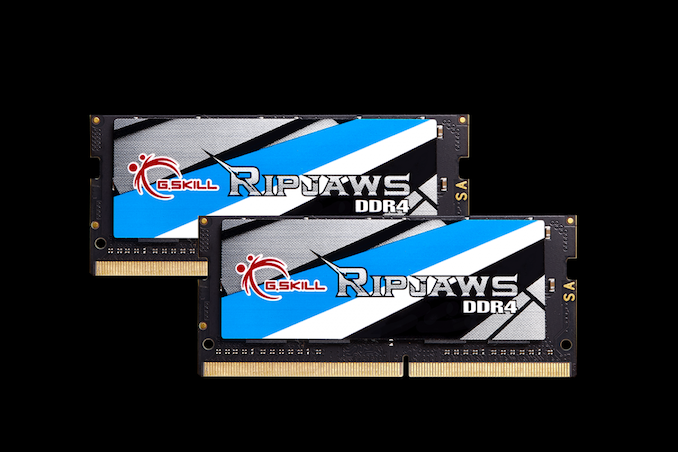 For the Cannon Lake based Lenovo Ideapad 330-15ICN, we removed the low-end SSD and HDD that was shipped with the design and put in our own Crucial MX200 1TB and 2x4 GB DDR4 SO-DIMMs for testing. Unfortunately we can’t probe the exact frequency the memory seems to be running at, nor the sub-timings, because of the nature of the system. However the default SPD of the modules is DDR4-2400 17-17-17.