Anyone interested in leading edge semiconductors knows that Intel is late with its newest manufacturing process. The '10nm' node was first announced in 2014, to be released in 2016. While officially 'shipping for revenue' by 31 December 2017, the only way we knew to get hold of an Intel 10nm x86 CPU was if you happened to be a Chinese school and work with a specific distributor to buy a specific laptop.We pulled in a few favors from within the industry and managed to source the laptop for review. 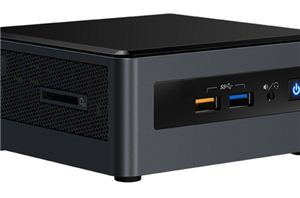