Conclusions: Not All Cores Are Made Equal

Designing a processor is often a finely tuned craft. To get performance, the architect needs to balance compute with throughput and at all times have sufficient data in place to feed the beast. If the beast is left idle, it sits there and consumes power, while not doing any work. Getting the right combination of resources is a complex task, and the reason why top CPU companies hire thousands of engineers to get it to work right. As long as the top of the design is in place, the rest should follow.

Sometimes, more esoteric products fall out of the stack. The new generation of AMD Ryzen Threadripper processors are just that – a little esoteric. The direct replacements for the previous generation units, replacing like for like but with better latency and more frequency, are a known component at this point and we get the expected uplift. It is just this extra enabled silicon in the 2990WX, without direct access to memory, is throwing a spanner in the works.

In order to take the full advantage of this setup, the workload has to be memory light. In workloads such as particle movement, ray-tracing, scene rendering, and decompression, having all 32-cores shine a light means that we set new records in these benchmarks.

In true Janus style, for other workloads that are historically scale with cores, such as physics, transcoding, and compression, the bi-modal core caused significant performance regression. Ultimately, there seems to be almost no middle ground here – either the workload scales well, or it sits towards the back of our high-end testing pack.

Part of the problem relates to how power is distributed with these big core designs. As shown on page four, the more chiplets that are in play, or the bigger the mesh, the more power gets diverted from the cores to the internal networking, such as the uncore or Infinity Fabric. Comparing the one IF link in the 2950X to the six links in 2990WX, we saw the IF consuming 60-73% of the chip power total at small workloads, and 25-40% at high levels.

In essence, at full load, a chip like the 2990WX is only using 60% of its power budget for CPU frequency. In our EPYC 7601, because of the additional memory links, the cores were only consuming 50% of the power budget at load. Rest assured, once AMD and Intel have finished fighting over cores, the next target on their list will be this interconnect.

But the knock on effect of not using all the power for the cores, as well as having a bi-modal operation of cores, is that some workloads will not scale: or in some cases regress.

There is no doubting that when the AMD Ryzen Threadripper 2990WX gets a change to work its legs, it will do so with gusto. We were able to overclock the system to 4.0 GHz on all cores by simply changing the BIOS settings, although AMD also supports features like Precision Boost Overdrive in Windows to get more out of the chip. That being said, the power consumption when using half of the cores at 4.0 GHz pushes up to 260W, leaving a full loaded CPU nudging 450-500W and spiking at over 600W. Users will need to make sure that their motherboard and power supply are up to the task. 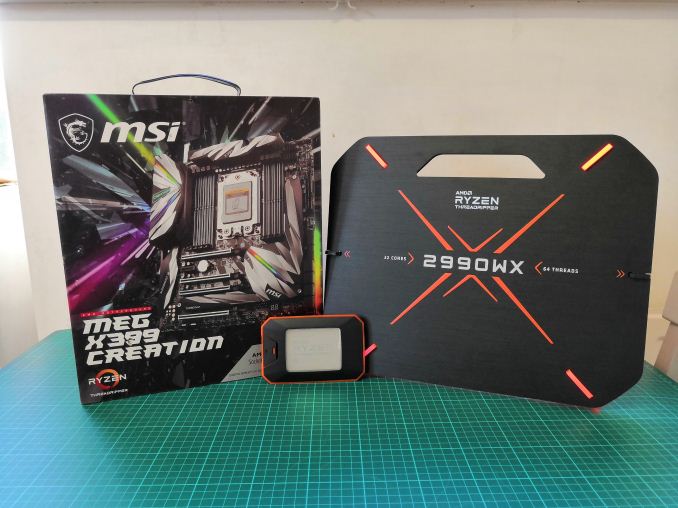 This is the point where I mention if we would recommend AMD’s new launches. The 2950X slots right in to where the 1950X used to be, and at a lower price point, and we are very comfortable with that. However the 2950X already sits as a niche proposition for high performance – the 2990WX takes that ball and runs with it, making it a niche of a niche. To be honest, it doesn’t offer enough cases where performance excels as one would expect – it makes perfect sense for a narrow set of workloads where it toasts the competition. It even outperforms almost all the other processors in our compile test. However there is one processor that did beat it: the 2950X.