Every machine build has some targets: performance, power, noise, thermal performance, or cost. It is certainly hard to get all of them, so going after two or three is usually a good target. Well it turns out that there is one simple error that can make you lose on ALL FIVE COUNTS. Welcome to my world of when I first tested the 32-core AMD Ryzen Threadripper 2990WX, where I forgot to remove the plastic from my CPU liquid cooler.

Almost all brand new CPU coolers, either air coolers, liquid coolers, or water blocks, come pre-packaged with padding, foam, screws, fans, and all the instructions. Depending on the manufacturer, and the packaging type, the bottom of the CPU cooler will have been prepared in two ways:

In our review kit, the Wraith Ripper massive air cooler, made by Cooler Master but promoted by AMD as the ‘base’ air cooler for new Threadripper 2 parts, had pre-applied thermal paste. It was across the whole base, and it was thick. It made a mess when I tried to take photos. 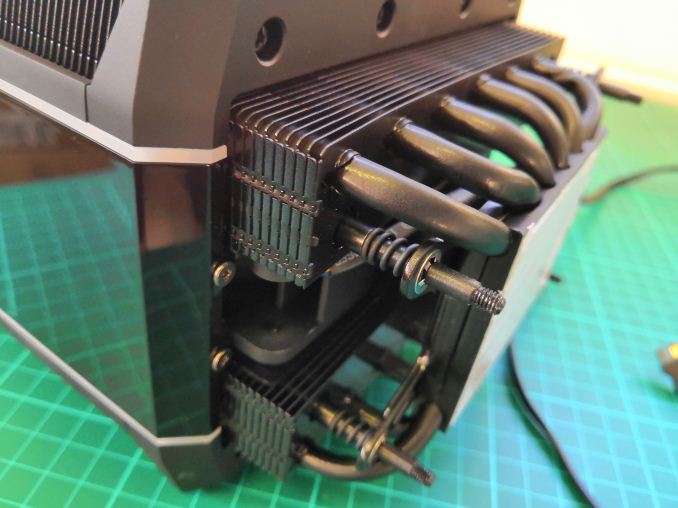 Also in our review kit was the Enermax Liqtech TR4 closed loop liquid cooler, with a small tube of thermal paste included. The bottom of the CPU block for the liquid cooler was covered in a self-adhesive plastic strip to protect the base in the packaging. 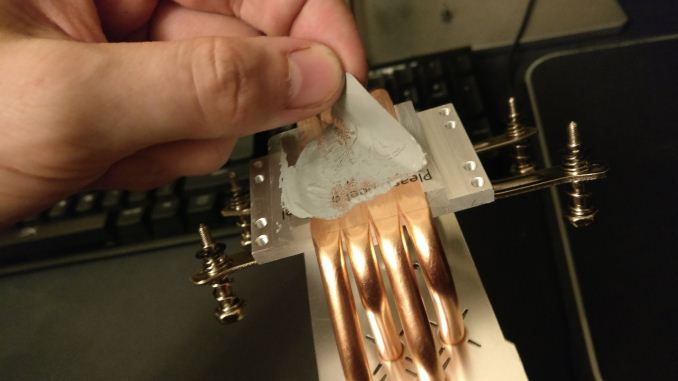 So confession time. Our review kit landed the day before I was travelling from the UK to San Francisco, to cover Flash Memory Summit and Intel’s Datacenter Summit. In my suitcases, I took an X399 motherboard (the ASUS ROG Zenith), three X399 chips (2990WX, 2950X, 1950X), an X299 motherboard (ASRock X299 OC Formula), several Skylake-X chips, a Corsair AX860i power supply, an RX 460 graphics card, mouse, keyboard, cables – basically two systems and relying on the monitor in the hotel room for testing. After an 11 hour direct flight, two hours at passport control, a one hour Uber to my hotel, I set up the system with the 2990WX.

I didn’t take off the plastic on the Enermax cooler. Well, I didn’t realize it at the time. I even put thermal paste on the processor, and it still didn’t register when I tightened the screws.

I set the system up at the maximum supported memory frequency, installed Windows, installed the security updates, installed the benchmarks, and set it to run overnight while I slept. I didn’t even realize the plastic was still attached. Come mid-morning, the benchmark suite had finished. I did some of the extra testing, such as base frequency latency measurements, and then went to replace the processor with the 2950X. It was at this time I performed a facepalm.

It was at that point, with thermal paste all over the processor and the plastic, I realized I done goofed. I took the plastic off, re-pasted the processor, and set the system up again, this time with a better thermal profile. But rather than throw the results away, I kept them.

The goal of any system is to keep it with a sufficient thermal window to maintain operation: most processors are rated to work properly from normal temperatures up to 105C, at which point they shut down to avoid permanent thermal damage. When a processor shuttles electrons around and does things, it consumes power. That power is lost as heat, and it dissipates from the silicon out into two main areas: the socket and the heatspreader.

For AMD’s Threadripper processors, the thermal interface material between the silicon dies and the heatspreader is an indium-tin solder, a direct metal-to-metal bonding for direct heat transfer. Modern Intel processors use a silicone thermal grease instead, which is not as great, but has one benefit – it lasts longer through thermal cycling. As metals heat up, they expand: with two metals bonded together, with different thermal expansion coefficients, with enough heat cycles will crack and be ineffective – thermal grease essentially eliminates that issue. Thermal grease also happens to be cheaper. So it’s a trade-off between price/longevity and performance.

Above the heatspreader is the CPU cooler, but between the two is another thermal interface which the user can decide. The cheapest options involve nasty silicone thermal grease that costs cents per gallon, however performance enthusiasts might look towards a silver based thermal paste or a compound with good heat transfer characteristics – usually the ability for a paste to spread under pressure is a good quality. Extreme users can implement a liquid metal policy, similar to that of the solder connection, which binds the CPU to the CPU cooler pretty much permanently.

So what happens if you suddenly put some microns of thermally inefficient plastic between the heatspreader and the CPU cooler?

First of all, the conductive heat transfer is terrible. This means that the thermal energy stays in the paste and headspreader for longer, causing heat soak in the processor, raising temperatures. This is essentially the same effect when a cooler is overwhelmed by a large processor – heat soak is real and can be a problem. It typically leads to a runaway temperature rise, until the temperature gradient can equal the heat energy output. This is when a processor gets too hot, and typically a thermal emergency power state kicks in, reducing voltage and frequency to super low levels. Performance ends down the drain.

Ultimately this issue hurts AMD more than you might think. The way AMD implements its turbo modes is not a look-up-table where cores loaded equals turbo frequency – it relies on power, current, and thermal limits of a given chip. Where there is room, the AMD platform is designed to add frequency and voltage where possible. The thermal aspect of this is what AMD calls XFR2, or eXtended Frequency Range 2.

At AMD’s Tech Day for Threadripper 2, we were presented with graphs showing the effects of using better coolers on performance: around 10% better benchmark results due to having higher thermal headroom. Stick the system in an environment with a lower ambient temperature as well, and AMD quoted a 16% performance gain over a ‘stock’ system. 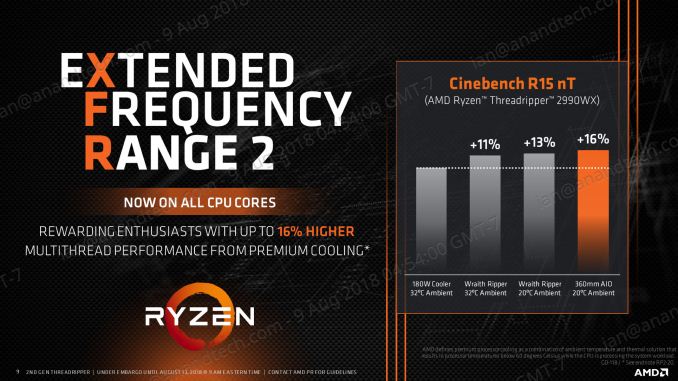 However, the reverse works too. By having that bit of plastic in there, what this effectively did was lower that thermal ceiling, from idle to load, which should result in a drop in performance.

So despite being in a nice air-conditioned hotel room, that additional plastic did a number on most of our benchmarks. Here is the damage:

For all of our multi-threaded tests, where the CPU is hammered hard, there is a significant decrease in performance as expected. Blender saw a 20% decrease in throughput, POV-Ray was 10% lower, 3DPM was 19%. PCMark was only slightly lower, as it has a lot of single threaded tests, and annoyingly in some benchmarks we saw it swing the other way, such as WinRAR, which is more DRAM bound. Other benchmarks not listed include our compile test, where the plasticated system was 1% slower, or Dolphin, where there was a one-second difference.

What Have I Learned?

Don’t be a fool. Building a test bed with new components when super tired may lead to extra re-tests.