ASUS Prime B450 Plus

Although the TUF and Prime brands from ASUS share similar pricing schemes with their low-cost entry-level options, the TUF series is aimed specifically for gamers, whereas the Prime range shifts to a more basic and subtle range of features and aesthetics. The ASUS Prime B450-Plus provides a solid infrastructure to build a solid and good value system upon. The main features of the Prime B450-Plus include a Realtek ALC887-VD2 audio codec with an entry to DDR4-3200 memory support at a low base price. 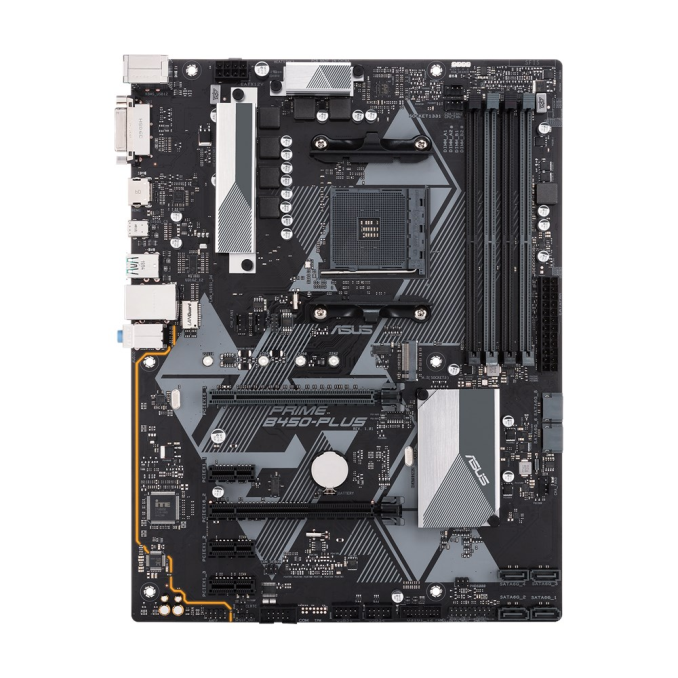 The aesthetics of the Prime B450-Plus ATX motherboard come through a subtle and clean looking black PCB with grey print which resembles a triangle pattern. The heatsinks across the board feature a classic looking light metallic finish, with a contrasting shade of darker grey to give extra definition. While there are no LEDs embedded into the PCB of the motherboard, a single Aura Sync-enabled RGB header is present to allow for users looking to add at least some element of RGB to their system.

In terms of PCIe, the board has two full-length PCIe slots with the top (grey) slot having a PCIe 3.0 x16 interface, and the second slot (black) taking its bandwidth directly from the B450 chipset, giving it an operational specification of PCIe 2.0 x4. In addition, a further three PCIe 2.0 x1 slots are there to give support for adapter cards such as sound cards and additional networking controllers etc.

The board has a total of four memory slots capable of supporting DDR4-3200, with a maximum capacity across the available slots of up to 64 GB. Both non-ECC and ECC memory are supported, with the latter entirely dependent on the used processor's capability to do so. 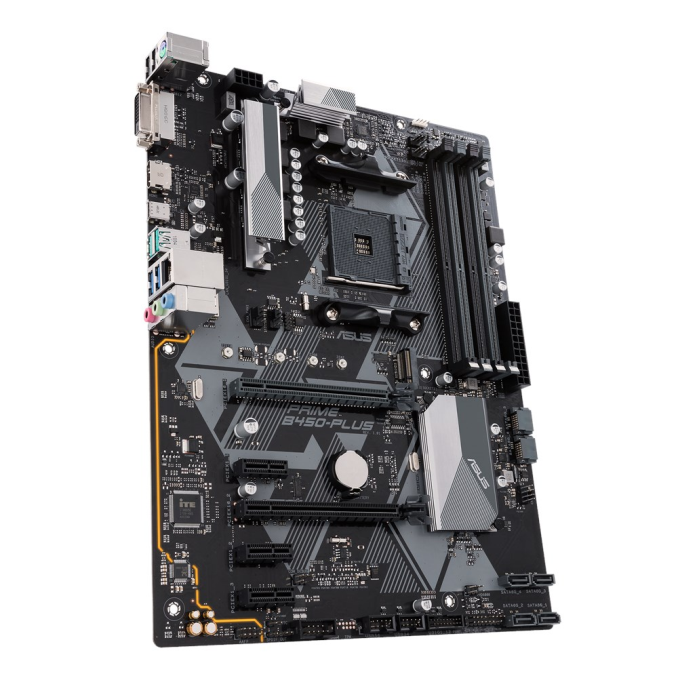 Providing power to the motherboard on the right-hand side of the board is a 24-pin ATX power input and between the corners of the MOSFET heatsinks is a single 8-pin ATX 12 V power input to provide power to the CPU. ASUS also advertises a 6-phase Digi+ digital power delivery on the B450-Plus Prime motherboard which is standard across their low-mid range (non-ROG branded) B450 chipset models.

Making up the storage is a total of six SATA 6 Gbps ports with four of them featuring straight angled connectors, whereas the remaining two located below the 24-pin ATX motherboard power input is right-angled. As with all of the B450 motherboards at launch, the SATA 6 Gbps ports support RAID 0, 1 and 10 arrays. A single M.2 slot is located just above the top full-length PCIe 3.0 x16 slot and has support for both SATA and PCIe 3.0 x4 M.2 22110 (22 x 110 mm) SSDs.

In relation to cooling options, the Prime B450-Plus has a total of five 4-pin headers with them being split between three different sections; three for case fans, one dedicated to the CPU fan and one for use with an AIO CPU cooling pump. A clear CMOS jumper is located towards the bottom PCIe 2.0 x1 and there’s capability to expand the featured USB connections by a further two USB 3.1 5 Gbps and four additional USB 2.0 ports thanks to internal headers.

The rear panel on the Prime B450-Plus is a variety of connections including two USB 3.1 10 Gbps Type-A ports, two USB 3.1 5 Gbps Type-A ports, two USB 2.0 ports and a single USB 3.1 5 Gbps Type-C port. Also features is three 3.5mm audio jacks with the onboard audio being powered by the Realtek ALC887-VD2 audio codec, and the single LAN port being handled by a Realtek RTL8111H Gigabit networking controller. To make use of the Ryzen 2000 series APUs is an HDMI and DVI-D output, with a single PS/2 keyboard/mouse combo port finishing off the rear I/O.

While the Prime range is a relatively basic and standard foundation to create a new system, the limitations are on the rest of the components and not the motherboard itself. The Prime B450-Plus looks good for a user not looking for anything too fancy, without paying extra for premium controllers such as the Realtek ALC1220 audio codec; the launch pricing of $109.99 signifies the intent to offer decent quality at a low entry price.