Rounding off our ASUS B450 launch day overviews is the microATX alternative to the ASUS Prime B450-Plus motherboard, the Prime B450M-K. This smaller form factor motherboard uses a lot of the same components as the ATX sized Prime B450-Plus such as Realtek’s ALC887-VD2 audio codec and RTL8111H Gigabit networking chip, as well as featuring the same level of memory compatibility with DDR4-3200 being supported out of the box. 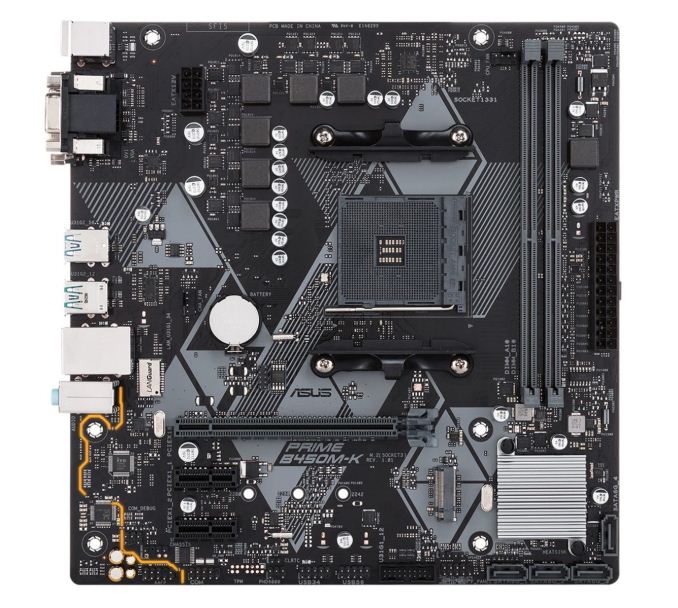 The style and design run in symmetry with the ATX sized version (Prime B450-Plus) and has a clean and clutter free black PCB, with a grey triangle shaped pattern. The B450M-K omits any integrated RGB backlighting on-board, instead, users can make use of lighting emanating from the PCIe slot and audio trace paths which gives the impression the audio area of the PCB has separation.

Due to the microATX form factor, the Prime B450M-K features a single full-length PCIe 3.0 x16 slot with a further two PCIe 2.0 x1 slots. Memory wise, the board has support for DDR4-3200 with a total capacity of up to 32 GB of system memory over the two provided slots. The Prime B450M-K represents one of the most basic B450 motherboards at launch, but this is reflected in the pricing ASUS gone with for this Prime branded board. 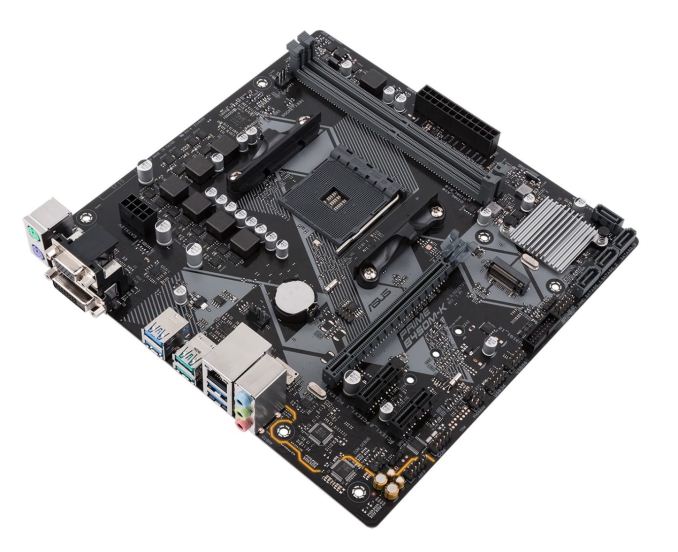 To provide power from the PSU to the motherboard, a 24-pin ATX input can be found on the right-hand side of the board, with an 8-pin ATX 12 V power input dedicated for providing power to the CPU. Aside from the ROG Strix branded B450 pairing, the Prime B450M-K from the images looks as though it has a 6-phase Digi+ power delivery; albeit without any heatsink to help with dissipating heat from the MOSFETs and other phase componentry.

Focusing on the storage options available on the B450M-K, a total of four SATA 6 Gbps ports supporting RAID 0, 1 and 10 arrays is present. All four SATA 6 Gbps ports sit around the edge at the bottom right-hand corner of the board and feature straight angled connectors. In addition to these, is a single PCIe 3.0 x4 and SATA compatible M.2 slot which supports drives up to a sizing of M.2 2280 (22 x 80 mm).

The sizing and budget-friendly nature of the Prime B450M-K allows for only two 4-pin fan headers throughout the board, with one dedicated to the CPU fan and the other to a single case fan; fan splitters could be used to increase the number of support fans, although it would depend on the voltage of the headers which is currently unknown. In addition to the six USB Type-A ports on the rear and additional four USB 2.0 ports can be had from using the internal headers.

On the rear panel, there are a total of two USB 10 Gbps Type-A ports as well as a further four USB 3.1 5 Gbps Type-A ports. Powering the three 3.5mm audio jacks is the Realtek ALC887-VD2 audio codec and the single LAN port is controlled by the Realtek RTL8111H Gigabit networking chip. Unlike every other ASUS B450 motherboard, the Prime B450M-K has a separate PS/2 port for both a keyboard and mouse, with a single DVI-D and VGA output provided to allow use with the AMD Ryzen APUs.

While the ASUS Prime B450M-K is one of the most basic and featureless of all the B450 chipset laden boards at launch, this is reflected in the pricing. The pricing of the B450M-K is currently unknown, but it's expected to cost below $79.99.