One of the most frustrating things to diagnose with a display that will not turn on is the cable. I’ve been there, in an overclocking content, having changed CPU/GPU/Motherboard/Monitor/DRAM over the course of two hours only to find that the cable between my machine and the monitor had died. There’s no indication that the cable was ever failing, and no light to say it was/wasn’t working.

I’m not the only one to have had this issue, apparently. AMD told a story of how their CEO of the Radeon Technology Group (RTG), Raja Koduri, had a similar issue trying to connect an HTPC to his TV. After many emails around the company, troubleshooting fresh OS installs and BIOS updates, the culprit was the HDMI cable, and despite the fact it had been used before was fine, but it had gone the way of the dodo.

With this in mind, AMD has created a set of display diagnostics in Crimson ReLive for HDMI. On all AMD APUs from Kabini and all GCN discrete GPUs, the software can detect a bad HDMI cable and realign the signal for both resolution and frequency to get to a point where the signal is stable. 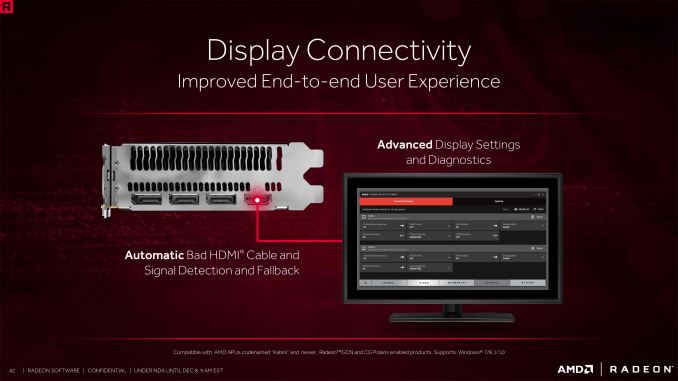 This can help in most situations (short of a severed cable) by widening the window for bad data to be accepted at a loss of frame rate or resolution. At present this feature is only for HDMI ports on relevant cards, but when a bad cable is detected and a display has to change to work, the software notifies the user that a new cable is needed.

One of the issues with last year’s launch of Crimson is that most of the video display settings seemed to not work with streamed video, particularly VP9 video coming from YouTube. This is in part due to VP9 decode not being supported on AMD products, but with the ReLive driver this changes. ReLive will allow for 4K60 decode of a VP9 stream for all GCN enabled discrete graphics cards and Stoney Ridge APUs. This is ultimately a software solution using the GPU, so it isn’t as power efficient as a dedicated hardware solution, but does offer a lot more performance than a CPU. 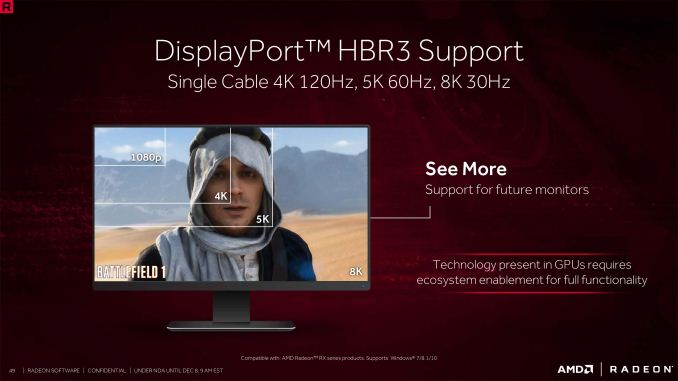 On the HDR front, AMD has been promoting that high end R9-300 series and RX-400 series graphics cards can support HDR10, however this has not been enabled in the drivers until Crimson ReLive. All the demos seen at AMD shows up to this point on compatible HDR10 displays have been beta driver versions specifically not released to the public, however with ReLive this changes. This also pairs with DisplayPort HBR3 support being enabled with ReLive allowing for 4K120, 5K60 and 8K30 over a single cable (HBR3 is on RX-series only).

One of the most requested features for AMD has been bringing FreeSync into other modes than just single-focus full-screen mode. This is particularly important for users that use multiple monitors and end up requiring other content on a second monitor while the first is running, or for other applications to take focus quickly. With ReLive, AMD has put the tools in place to enable Borderless Fullscreen mode for software that can use it. One of the issues moving away from a fullscreen fixed mode is the click-to-response time latency, which AMD claims to have reduced by up to 24%. 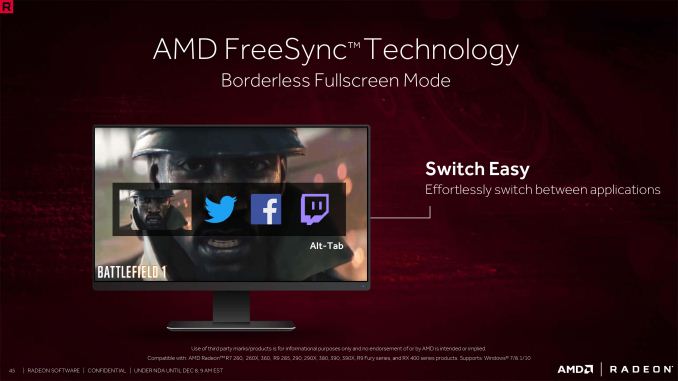 Refresh Ramping will be another feature in ReLive and is designed to stop harsh changes in panel refresh rate depending on the content. When the onscreen display can run at a lower refresh rate, rather than slamming down immediately to that rate, the driver will pull the refresh rate down over a few seconds in order to give a smoother transition, and similarly to a higher refresh rate. AMD states that this saves power, which without data might be correlated to the actual switching of refresh rate rather than the low refresh rate itself.