The Razer keeps the same 70 Wh battery capacity as last year, but has a 47 watt CPU now instead of a 37 watt CPU. For our battery tests, Optimus should keep the GTX 970 turned off, so it should not affect our scores. Razer saw a regression in battery life last year when they moved to the High DPI display, and we do not want to see this again.

Razer is also shipping a new 1080p non touch model this year. With the lower screen density, and fewer pixels to drive by the integrated GPU, battery life for that model should be above and beyond what we see here, but we will not know for sure unless we can get one to test. We have reached out to Razer for a sample, and will provide the results if we are able to get one.

For consistent results, we calibrate the display to 200 nits. On the model was received, this was 45% brightness. We then perform a series of tests multiple times and record how long the device lasts before shutting down. Laptops are configured to use the Power Saving mode in the power options to maximise battery life. Our first test is our light test, which consists of light web browsing. 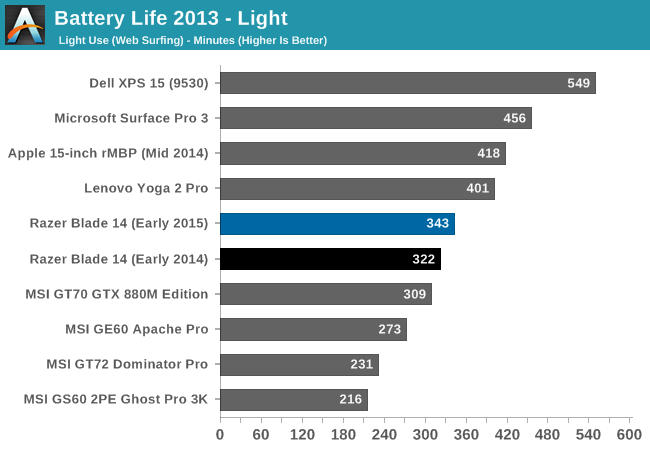 Luckily the higher wattage CPU did not cause a battery life hit under light loads. In fact, this year we were able to squeeze an extra twenty minutes out of the Blade than last year. It is still short of the 2013 model, which only had a 1600x900 display, and well back of the 95 Wh equipped Retina MacBook Pro and 91 Wh Dell XPS 15. High DPI has its price, and battery life is it.

Next we ramp up the workload, with a movie, heavier web browsing, and a 1 Mbps file download happening concurrently. 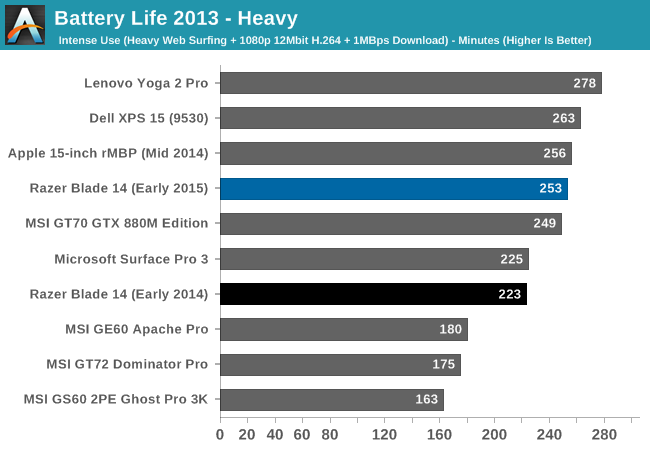 Our heavy test saw a nice jump in battery life with this test, coming in about 30 minutes higher than last year. It is a good result, coming in very close to the 2013 Blade, as well as the rMPB and XPS 15, both of which have much larger batteries. 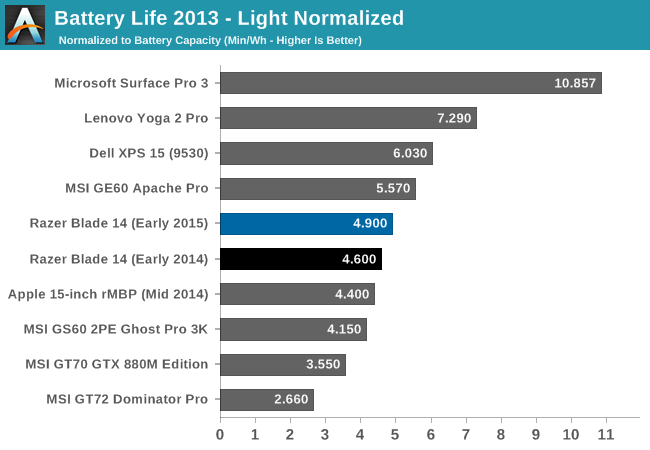 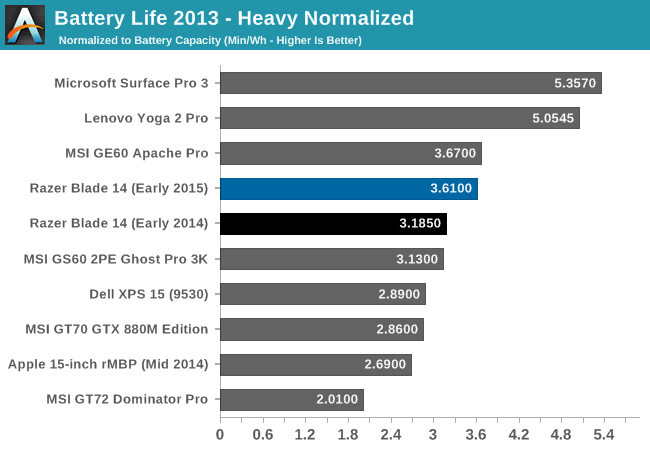 Normalizing the graphs removes the battery capacity from the scores, and lets us take a look at each platform’s overall efficiency. The 2015 model jumps up nicely over the 2014 model. The high resolution display is a big draw, but Razer has done a nice job reducing its impact on the overall battery life.

NVIDIA has settings to allow games to be auto configured to run with different settings depending on whether you are plugged in, or running off battery power. The goal is to allow for a longer gaming experience when mobile. Our results have been mixed on it so far, and a lot of it comes down to the individual game in question. Battery Boost caps the frame rate, allowing the GPU to draw less power. In practice, there are a lot of factors involved which come into play. If you are playing a demanding game that is already close to the framerate cap, Battery Boost is not going to be able to make a huge difference anyway. 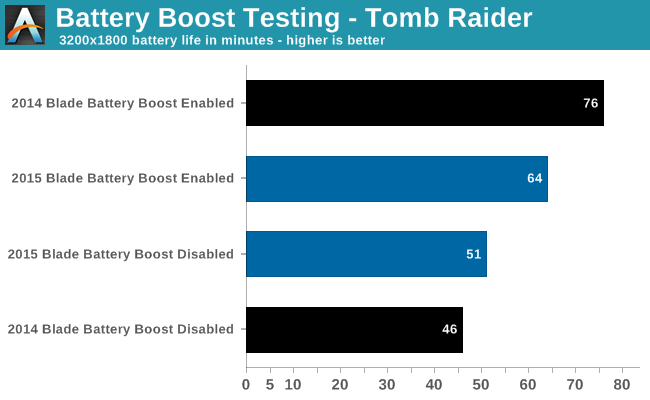 The difference is not huge with this game at the default GeForce Experience settings. Playing a less demanding game could show bigger gains here, but in my experience, keep the power cord handy if you are gaming. A high power CPU and GPU just will not lead to good battery life if they are being stressed.

The Razer Blade gets hot. The first one got hot, the second one got hot, and this one gets hot. There is a quite powerful CPU and GPU sitting under the keyboard, and they can both generate lots of heat when being pushed to their maximum. The air intakes are on the bottom, and exhaust out the vent between the back of the laptop and the display, so the hottest part is the center near the hinge. At the same ambient of 21°C, temperatures were not quite as high as we saw last year, but still very toasty at over 50°C at the power button. 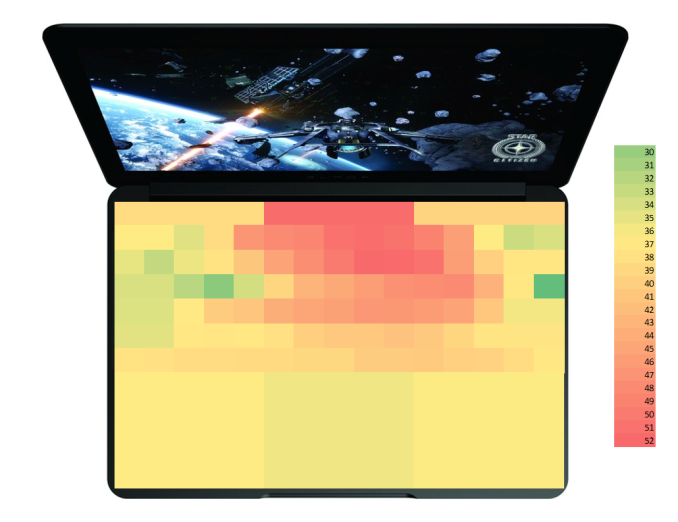 The graphic shows the hot spots on this laptop. Top center is the hottest, but the rest of the laptop is warm, but usable. There is a lot of heat to be moved out of this chassis.

To test and see if the GPU throttles under prolonged use, we checked it running the Tomb Raider benchmark for a couple of hours. 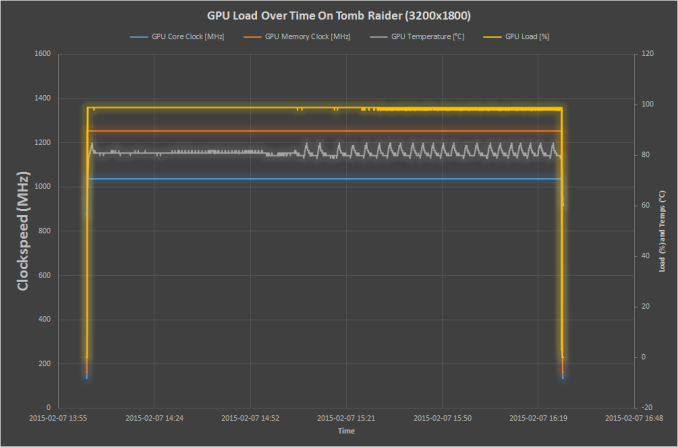 As you can see, the GPU load is completely flat, and the GPU core clock does not move at all over the duration. The only change was in the GPU temperature, which would rise up, causing the fans to increase in speed, and then it would fall down again and repeat.

Razer has tuned the fans to stay as quiet as possible. The laptop is almost dead silent under most light workloads, and then as you begin gaming, the speed will ramp up. Depending on the gaming load, fan speeds may increase for a bit, but they always seem to want to get down to the lowest speed possible to keep system noise down.

When the fans are running though, the laptop is very loud. We measured 55.0 dBA at 1 inch from the system after one hour of gaming. It is very loud, and very noticeable. In my opinion, any gaming on the Razer Blade would necessitate headphones unless the sound of fan noise does not bother you. There is a lot of heat generated inside the small chassis, and the fans have to expel that.