It goes without saying that battery life is one of the huge cornerstones of smartphone evaluation and critique. In the case of Nexus 5, the battery is a 3.8 V, 2300 mAh 2D battery giving 8.74 watt hours total. Looking only at battery capacity doesn’t always tell the whole story, since obviously it’s just a tank to draw from – the overall efficiency of the entire system and the sum of the energy drain of its parts determines how long the platform will last. The comparison point of course for the Nexus 5 is its close cousin, the LG G2, which has a 3000 mAh (11.4 Whr) stacked (3D) battery by LG Chem. Smartphone battery sizes have been increasing for a while now, and the reality is that Nexus 5’s is indeed on the smaller side given its display. 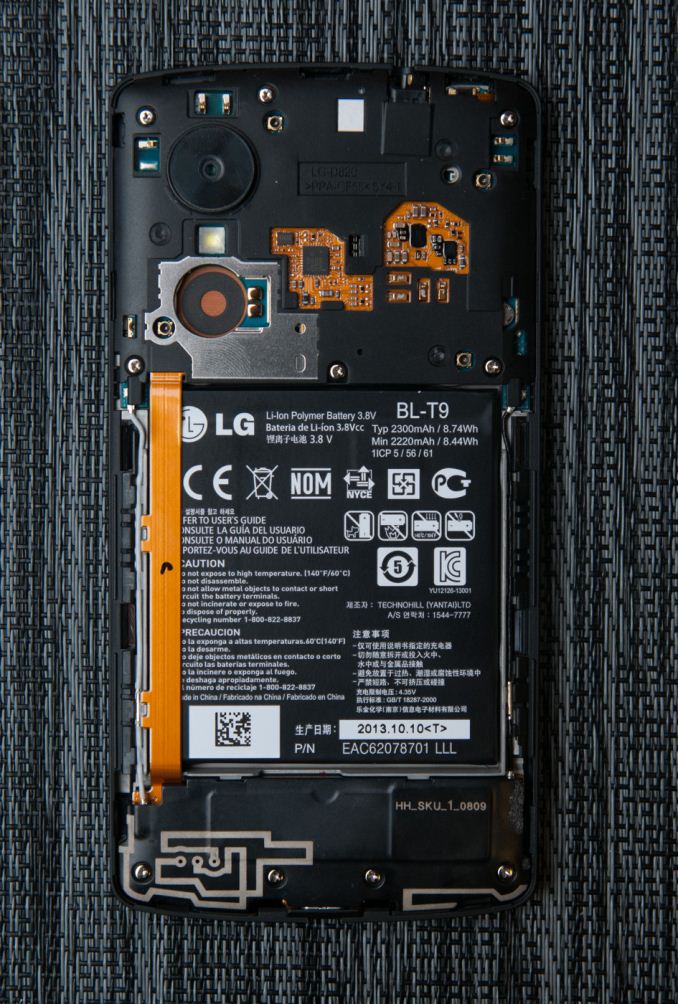 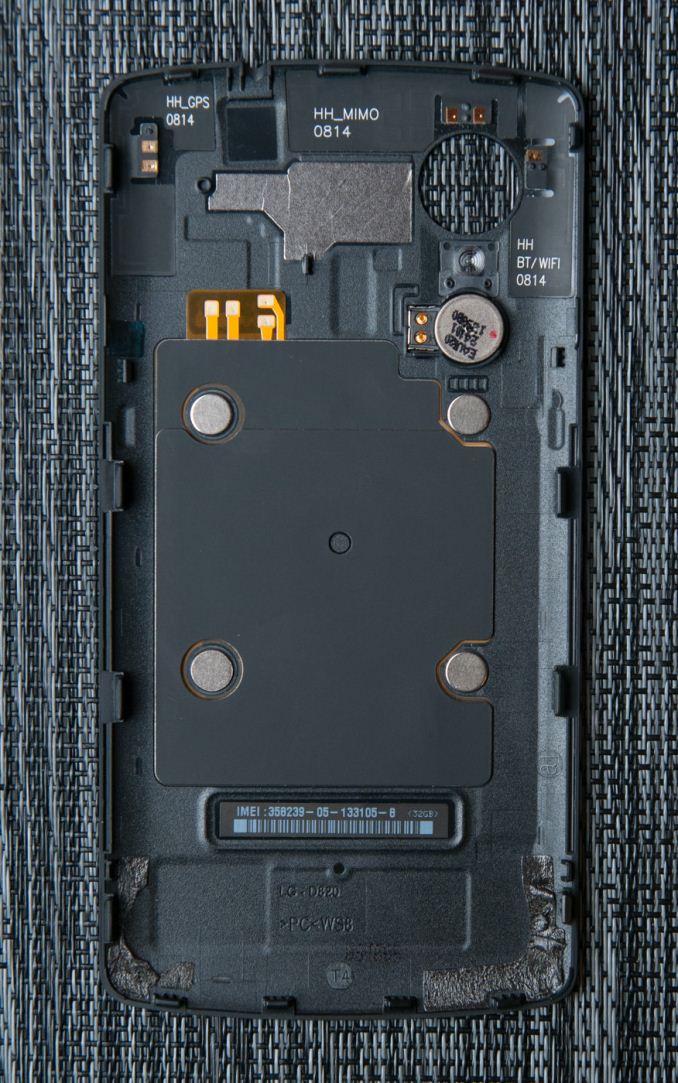 As I’ll talk about later, one thing the Nexus 5 has over the LG G2 is a QFE1100 envelope tracker for its cellular power amplifiers, which lowers power consumption by up to 20 percent, the same RF360 part we saw in the Galaxy Note 3. Interestingly enough the LG G2 shipped with a variant of this same family, QFE1101, which works in an APT (Average Power Tracker) mode instead, whereas QFE1100 works in both APT and ET modes. I’ll touch on these in the relevant section, but it’s important to note that in the cellular tests one of the big consumers of power (power amplifiers are easily the number two after display) has the bleeding edge component available to curb consumption and is literally the second handset on the market to include it.

To evaluate battery life we turn to our battery life testing suite, which we run over WiFi and all the cellular interfaces appropriate for the device. Here we see a good combination of regular spikes in CPU usage with idle time, hopefully simulating constant, reasonably paced usage. As always the display is set to exactly 200 nits and configured the same way we always configure devices for maximum consistency. 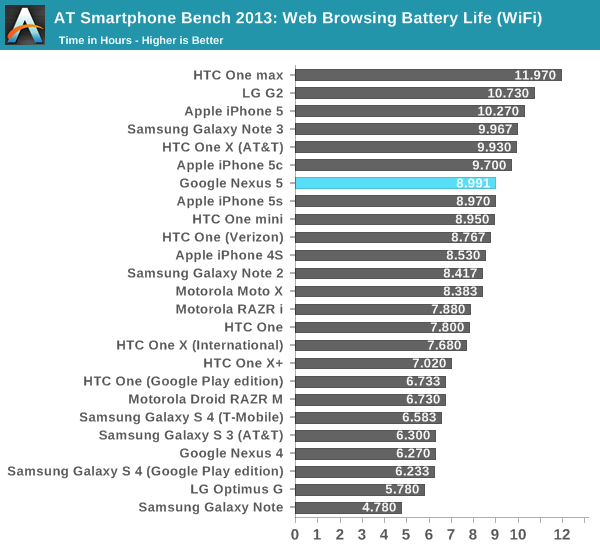 On WiFi, we see the Nexus 5 start off pretty well, behind the G2 and the newest 8974 phones, but no slouch at all, and considerably better than the Nexus 4. Of interest is how the Nexus 5 slips 16 percent versus the G2 despite having a 23 percent smaller battery.

For cellular, it’s the same workload as always. Since the Nexus 5 now has LTE, I went back and re-tested the Nexus 4 with LTE enabled for a closer comparison. Although the Nexus 4 never shipped with LTE officially enabled, the device included it on Band 4 for some time until a baseband update finally locked it out for good. I flashed back down and ran the test just for the sake of completeness, and since I Know there are a fair amount of people out there using the Nexus 4 on LTE still. Of course I also tested on 3G WCDMA. 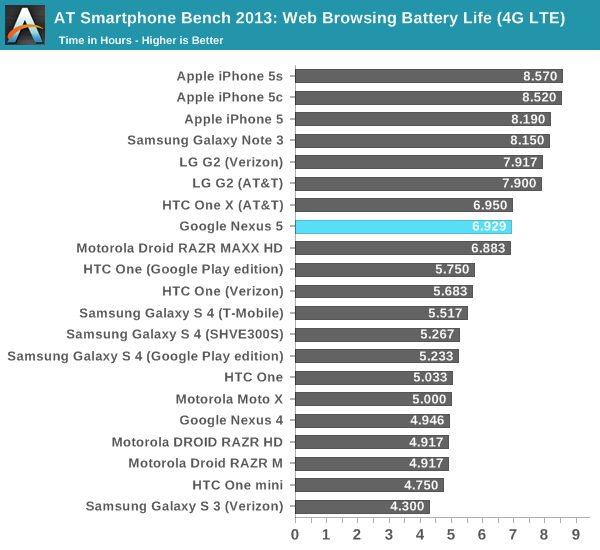 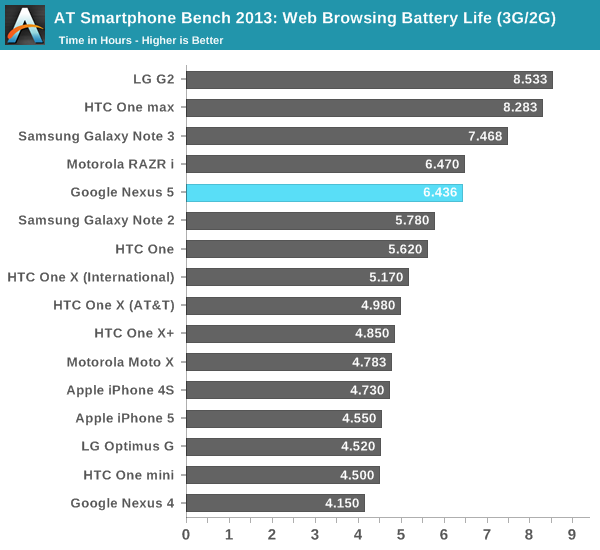 The Nexus 5 comes out far ahead of its predecessor on both 3G WCDMA and 4G LTE, although that’s fairly unsurprising given the year of improvement, different process (28nm HPM), envelope tracking, and battery size differences. The more interesting comparison point is the LG G2, which Nexus 5 can’t quite catch. Clearly the RF front end differences make a difference, otherwise the scaling would be 23 percent less battery on cellular, instead it is 12 percent on LTE. On 3G there’s a bigger delta however, almost 33 percent worse than the G2’s impressive result. Still, the Nexus 5 on LTE is no slouch. 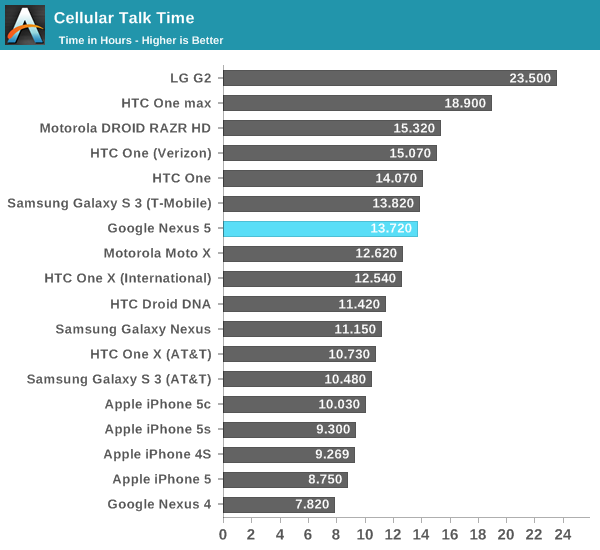 In the talk time test I was surprised to see a considerable falloff, although this is almost always gated by rock bottom power for the system. There clearly are some other consumers which either aren’t powering down all the way or LG has better optimized for on the G2 versus the Nexus 5 which is Google’s domain. 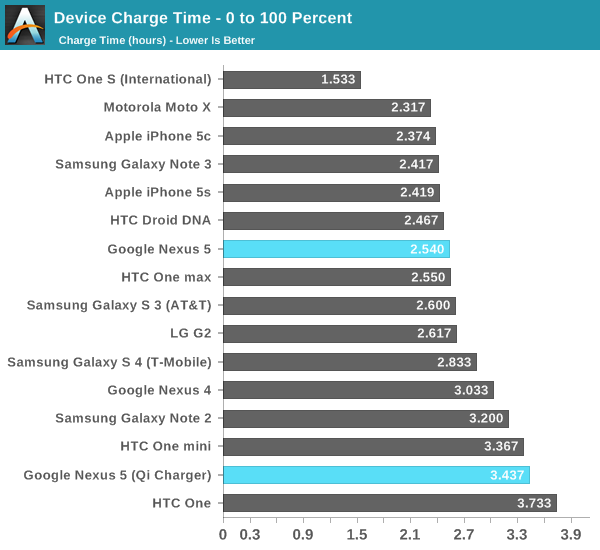 Looking at battery capacity alone would leave you with the impression that the Nexus 5 is woefully under-specced, when in reality battery life shows definite gains over previous generation devices. Although I’d love if the device somehow had the same size battery as the G2, it’s clearly enough to make it through at least a full day, and in my time daily driving the device I’ve yet to come up short.

When it comes to charging, Google continues to do the sane thing and implement BC 1.2 signaling. Unlike the LG Optimus G, the Nexus 5 does not use the battery charging IC Qualcomm makes for use in conjunction with its normal PMICs, instead it uses the TI BQ24192 to charge at up to 1.5 A maximum and a MAX17048 fuel gauge. This seems to be done in order to accommodate wireless charging, though there could be other cost considerations at play. The Nexus 5 seems to charge in the linear region at just above 1 A however, although the limit set for BQ24192 is 1.5 A, and has a total charge time just above 2.5 hours on the supplied 1.2 A charger. 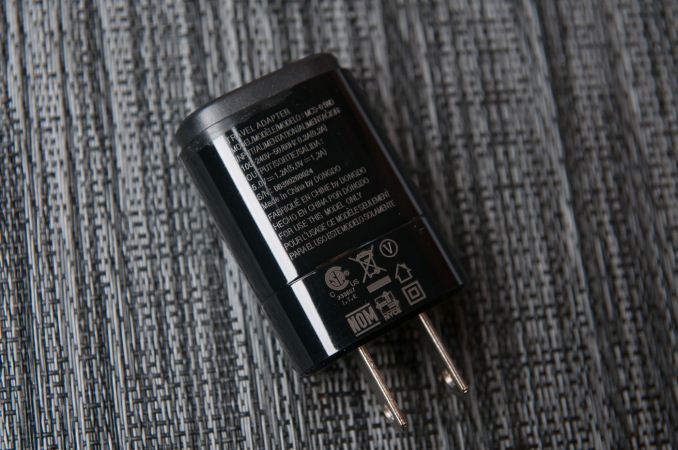 As I mentioned, Nexus 5 also works with the Qi (prounounced “chee”) wireless charging specification which Google seems to have thankfully settled on for Nexus 4, 7, and now 5. The Nexus 5 uses TI’s bq51013b power supply and charge receiver which is WPC 1.1 compliant. I praised the Nexus 4 for how well implemented Qi charging was and how it charged in basically the same amount of time on the charging mat or USB, as far as I can tell the Nexus 5 continues to implement things properly and will charge at accelerated rates. I’ve seen a few handsets that include Qi but oddly enough only charge at 500 mA like a USB data port, this is thankfully not the case on Nexus 5.

Google sent along their first party Qi wireless charger as well and I had a chance to check it out. I’ve never used the charging “Orb” that shipped with Nexus 4 so I can’t comment on it, I have however used the two-position Energizer Qi charger and the Samsung Qi charger pad. Google’s universal Nexus wireless charger works with the other Qi compatible Nexus devices, Nexus 7 (2013), 4, and 5, and of course any Qi compliant devices. I tested with the Droid DNA and had no issues charging like any other Qi charger. 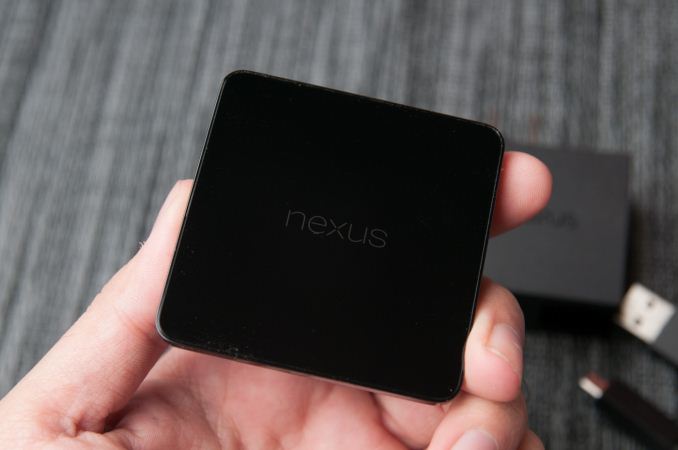 Google’s charger works in conjunction with a 9 Watt USB AC adapter and plugs into the charging puck over microUSB. What’s interesting about the charger is both how small it is (the outline is quite small) and how the bottom has a material that seems eerily reminiscent of what was on the bottom of the touchstone charger that shipped with the Palm Pre. The charger will securely adhere itself to surfaces, which it needs to since it has some magnets inside for alignment of devices. 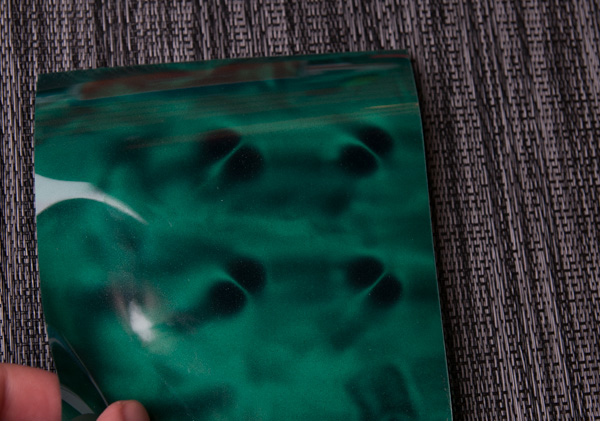 I put some magnetic field viewing film on top of Google’s wireless charger, and you can see four magnets at the corners, which match up nicely with the four metal slugs on the back of the Nexus 5 around the charging coil. 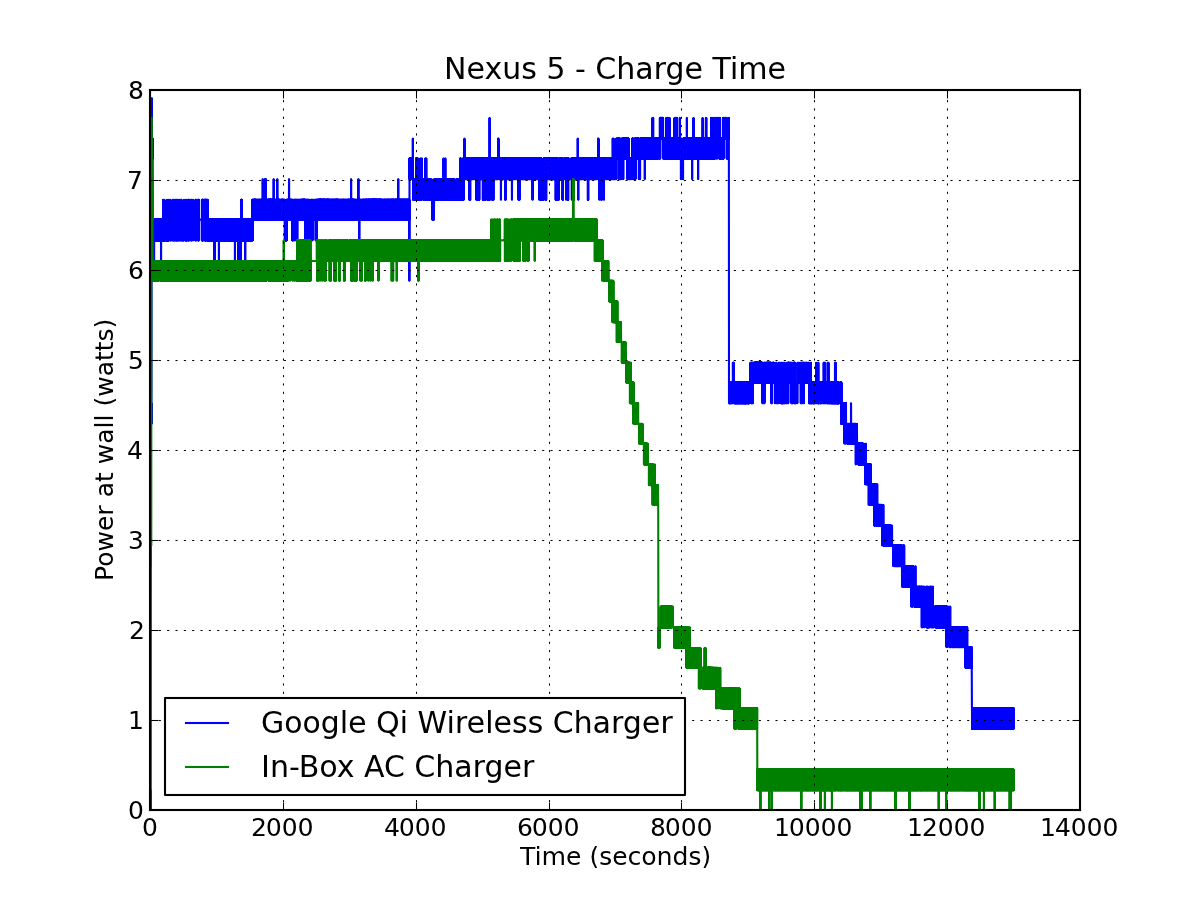 There’s still some overhead and loss with all wireless charging, including Qi. I measured and plotted the power draw and thus charge time for a fully drained Nexus 5 being charged both using the in-box supplied AC charger from Google, and their wireless charger. There ends up being about a 50 minute difference between the two, so you’re definitely trading convenience for a longer charge time, but once you’ve used wireless charging it’s hard to give up that convenience. At the very least, Google’s new charger addresses some of the complaints I saw levied against the original charging Orb with the inclusion of magnets that do seem to hold down devices better and keep them aligned so they charge properly, and included a very good grippy material on the back that adheres it to surfaces quite nicely.