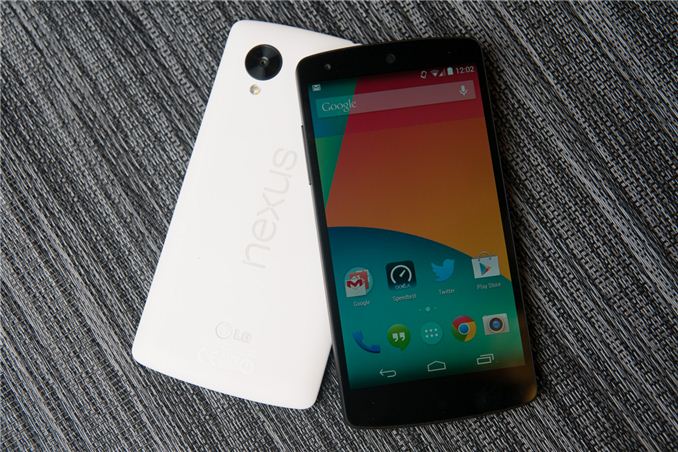 Each year, Google picks a silicon vendor, a hardware partner, and releases a new version of Android running on top of them. The result is a Nexus phone, and for five iterations now that process has repeated, resulting in a smartphone that’s the purest expression of Google’s vision for its mobile platform. Today we’re looking at the Nexus 5.

Nexus 5, as its name makes obvious, is the latest generation of Google’s line of Nexus smartphones, and also is topped by a 5-inch display. While the Nexus program originally started only for smartphones, we’ve seen Google since extend the program to include a 7-inch and 10-inch tablet form factor, as well as a line of accessories. In recent years, we’ve seen Nexus go from being part enthusiast curiosity and development device, to a brand tailored for consumers looking for the latest and greatest the Android platform has to offer at a killer price. 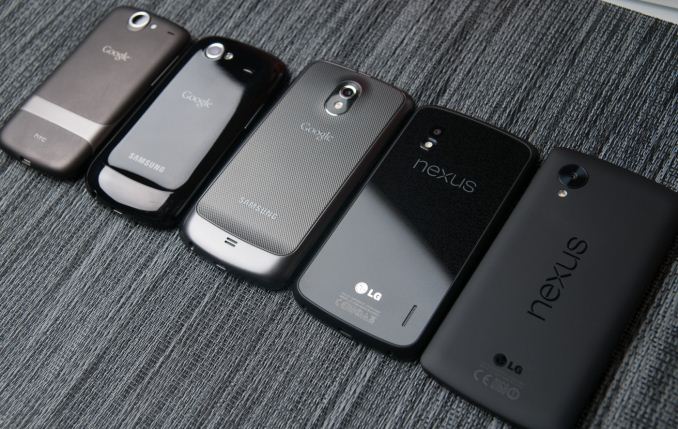 Last generation we saw the Nexus 4, a device that was essentially an LG Optimus G for T-Mobile in different clothing and priced at a competitive price, yet still included the latest and greatest silicon from Qualcomm with APQ8064 (S4 Pro). For Nexus 5, Google has once again gone with hardware partner LG and silicon vendor Qualcomm, this time with a phone that’s somewhat analogous to the LG G2 (but not exactly the same platform) and using the latest and greatest MSM8974 (Snapdragon 800) silicon. 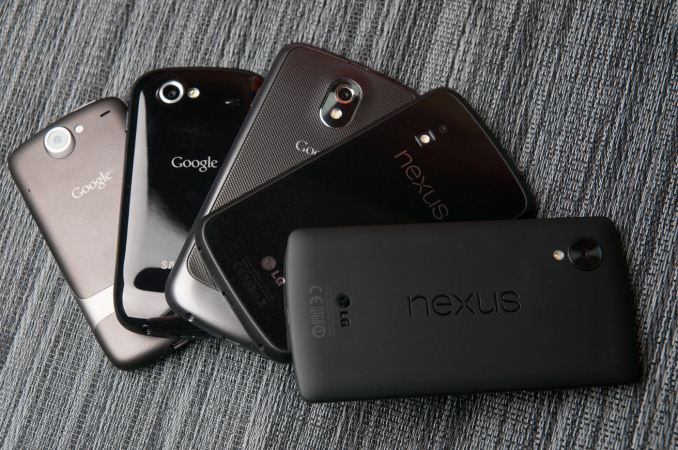 Let’s start with the hardware, since that’s the normal flow for a review. The Nexus 4 bore a lot of superficial similarities to the Optimus G, including a glass back with laser etched design below its surface, the same display, banding, and materials. The Nexus 5 on the other hand doesn’t bear any similarities to the G2, with its buttons on the back, narrow bezel, rounded backside, and glossy plastic. Instead, the Nexus 5’s design borrows much of its industrial design language from the Nexus 7 (2013), with the slightly rounded top and bottom, landscape “nexus” logo on the rear, and large radius curves all around the side. The Nexus 5 and 7 share almost the same shape and profile, and in the case of the black Nexus 5, same rubberized soft touch material on the back and sides. If you scaled down the Nexus 7 design you’d get something which is awfully close to the Nexus 5. 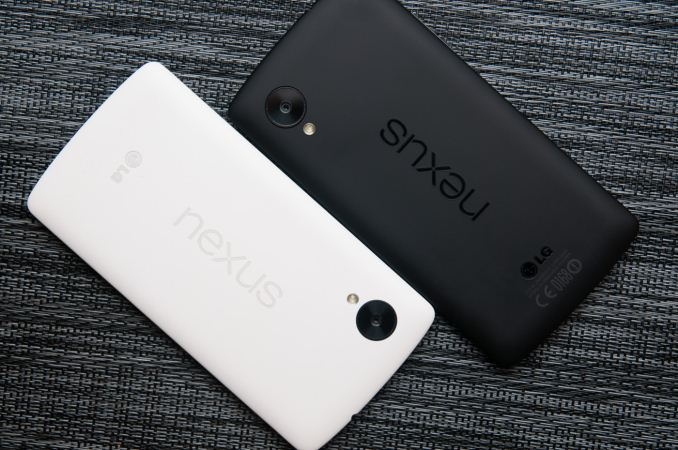 The result is a two-device family that feels like it was made by the same company, and it’s really the first time Google has aligned its industrial design in such a sweeping fashion, in this case even across two different hardware partners. I guess you could make the argument that with the exception of the Nexus 10, Google has eliminated any industrial design fragmentation and finally crafted some hardware design language that it owns for itself. 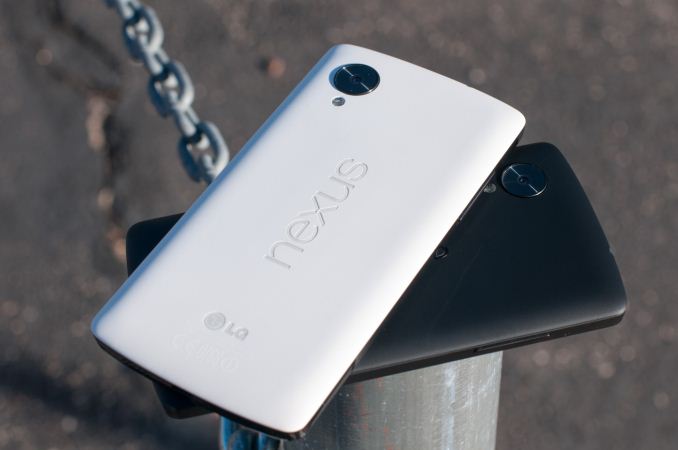 Google sampled us first a black Nexus 5, and later a white Nexus 5 at my request so I could check out the material differences I saw some discussion about. It’s true that there are some differences between the two devices. For starters, the white device has a backside which eschews the soft touch material, instead giving the polymer-backed device a rougher, textured feeling. The absence of soft touch continues to the edge, which is glossy black plastic instead of the rubberized material, and comes with protective plastic installed over it by default. On the front the only visible difference between white and black is a white colored earpiece, the rest of the bezel around the display is still black.

I’m reminded of the split between the white and black Note 3 with the Nexus 5, which also only includes rubberized material on the black model. I find myself preferring the feeling of the white model instead, but it’s really just a story of personal taste. No doubt the absence of soft touch on the white material is to prevent staining from hand oils or other dyes as the device ages. I don’t find that the absence of soft touch on the white model makes it any more difficult to hold or grip onto, the negative-angled bezel really does help the Nexus 5 fit into the hand securely. 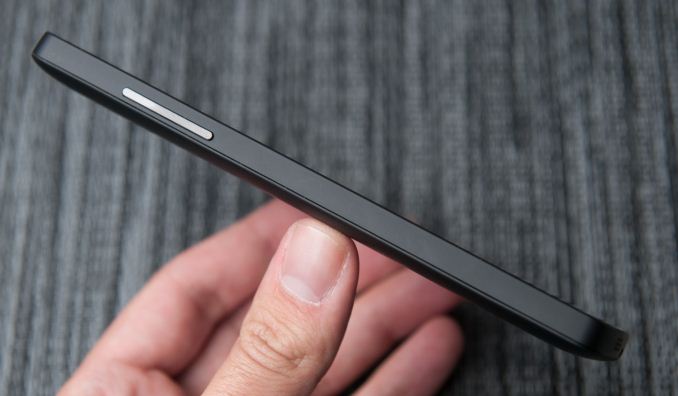 Although the Nexus 5 is a close cousin, it doesn’t adopt the button arrangement from the G2, instead locating the volume and standby buttons in a normal place. Volume rocker ends up on the left, power on the right side.

Likewise earpiece is on top and microUSB is at the bottom of the device. What’s unique about the Nexus 5 buttons is the material of those buttons – they’re ceramic, not polycarbonate. The result is that they’re sharp and instantly locatable with the brush of a finger, it’s a subtle thing that does feel different. The only complaint I have is that they do seem to rattle slightly inside their cutouts. I can affirm that the white model seems to have less rattle, but I’m not entirely sure how much of that is intrinsic to the color difference and absence of soft touch.

Also on the back is the Nexus 5’s oversized camera cutout, which is slightly raised from the surface around it. It’s fair to say that the Nexus 5 does have a camera bump, something that’s not going away soon in all but the most iconic devices. When I first saw the oversized ring, I assumed it was just a design motif, and others later speculated it was for a line of magnetically-attachable add on lenses. To date none of those have materialized, and upon further consideration having magnets next to the VCM (voice coil motor) electromagnetic focus and OIS mechanism could complicate things. In any case, at present the oversized ring around the camera aperture is a unique design point rather than something which serves a function.

The only real negative about the camera cutout is that dust seems to be able to get into the crack surrounding it and the cover glass. It’s something unfortunate about the Nexus 5’s design in general – there are cracks that show dirt quickly, for example the backside has a seam around the edge where dust seems to intrude. It obviously doesn’t change the Nexus 5’s function, but immediately starts looking dirty on the black model, and part of why given both side by side I prefer the white one. 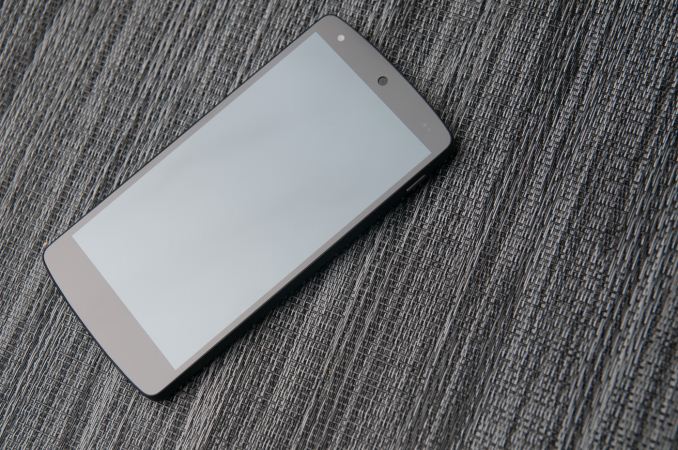 I think pragmatic describes the Nexus 5 design quite well, since honestly the design doesn’t try to be flashy just for the sake of differentiation or make any crazy materials choices on the outside. There are subtle design features which definitely are appreciated, however, like the negative angle to the edge which makes the device easy to grip, those ceramic buttons, and the continuity of design language from the Nexus 7 of course. Materials are a big differentiator between devices right now, and again the Nexus 5 is relatively pragmatic with its choice of polymer, but does deserve kudos for not going with the slick, glossy-surfaced material still preferred by Korean handset makers.

The Nexus 5 feels well made and precision crafted, but I can’t shake the feeling that Nexus 4 felt more like a standout design of its own. The Nexus 5 seems a lot more, well, traditional, without the rounded-glass edges, chrome ring, or pattern below the glass on the back (which I still maintain contained some kind of encoded message). The reality is that Google made a lot of decisions with Nexus to optimize for cost, and that the Nexus 5’s design is actually quite differentiated given the price.

The Nexus 5 adds a lot over its predecessor – larger 1080p display, newer silicon, 802.11ac, better camera with OIS, and of course LTE connectivity, all while getting minimally more expensive than its predecessor. It’s almost unnecessary to say that the Nexus 5 is obviously the best Nexus phone yet.

Google also sent over one of the Nexus 5 bumper cases, which really isn’t so much bumper as it is, well, all around case. The Nexus 4 had bumpers that wrapped around the edge, but left the glass back exposed, much like the iPhone 4/4S era bumpers. 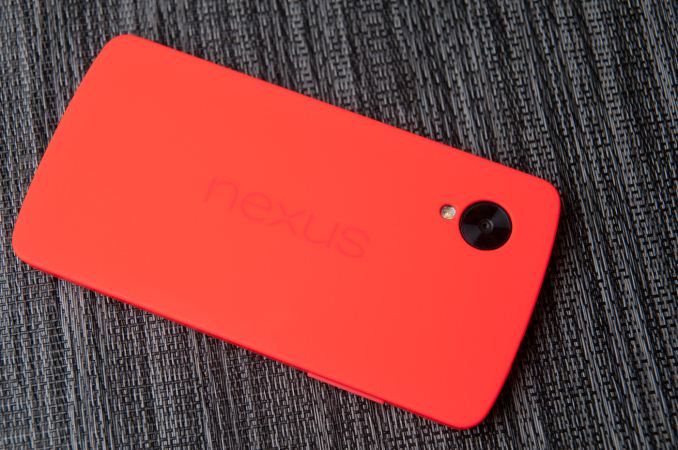 Nexus 5’s bumper case covers up everything but the oversized camera aperture on the back. The red one I got doesn’t seem to be silicone but some other thermoplastic. 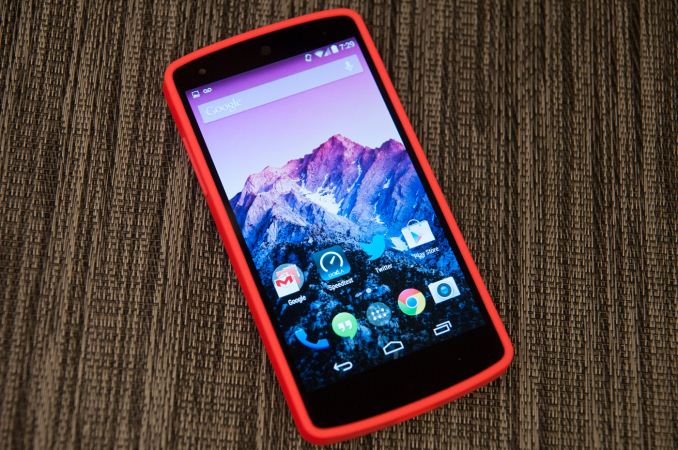 At $35 it’s a bit on the pricey side, but it does fit the device nicely and get the job done with some cool neon colors that spice up the Nexus 5.