With Rahul having covered the basis of Titan’s strong compute performance, let’s shift gears a bit and take a look at real world usage.

On top of Rahul’s work with Titan, as part of our 2013 GPU benchmark suite we put together a larger number of compute benchmarks to try to cover real world usage, including the old standards of gaming usage (Civilization V) and ray tracing (LuxMark), along with several new tests. Unfortunately that got cut short when we discovered that OpenCL support is currently broken in the press drivers, which prevents us from using several of our tests. We still have our CUDA and DirectCompute benchmarks to look at, but a full look at Titan’s compute performance on our 2013 GPU benchmark suite will have to wait for another day.

For their part, NVIDIA of course already has OpenCL working on GK110 with Tesla. The issue is that somewhere between that and bringing up GK110 for Titan by integrating it into NVIDIA’s mainline GeForce drivers – specifically the new R314 branch – OpenCL support was broken. As a result we expect this will be fixed in short order, but it’s not something NVIDIA checked for ahead of the press launch of Titan, and it’s not something they could fix in time for today’s article.

Unfortunately this means that comparisons with Tahiti will be few and far between for now. Most significant cross-platform compute programs are OpenCL based rather than DirectCompute, so short of games and a couple other cases such as Ian’s C++ AMP benchmark, we don’t have too many cross-platform benchmarks to look at. With that out of the way, let’s dive into our condensed collection of compute benchmarks.

Note that for 2013 we have changed the benchmark a bit, moving from using a single leader to using all of the leaders. As a result the reported numbers are higher, but they’re also not going to be comparable with this benchmark’s use from our 2012 datasets. 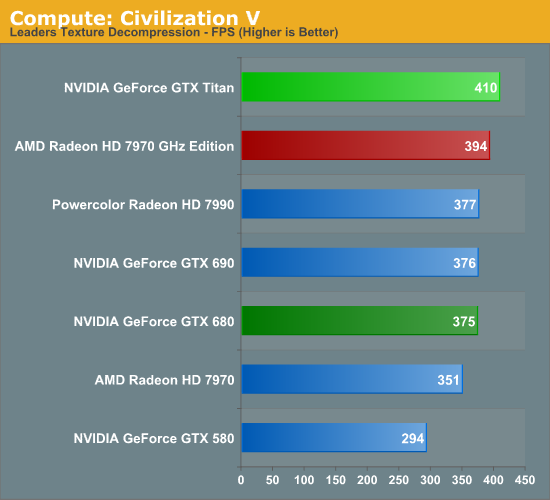 With Civilization V having launched in 2010, graphics cards have become significantly more powerful since then, far outpacing growth in the CPUs that feed them. As a result we’ve rather quickly drifted from being GPU bottlenecked to being CPU bottlenecked, as we see both in our Civ V game benchmarks and our DirectCompute benchmarks. For high-end GPUs the performance difference is rather minor; the gap between GTX 680 and Titan for example is 45fps, or just less than 10%. Still, it’s at least enough to get Titan past the 7970GE in this case.

Our second test is one of our new tests, utilizing Elcomsoft’s Advanced Office Password Recovery utility to take a look at GPU password generation. AOPR has separate CUDA and OpenCL kernels for NVIDIA and AMD cards respectively, which means it doesn’t follow the same code path on all GPUs but it is using an optimal path for each GPU it can handle. Unfortunately we’re having trouble getting it to recognize AMD 7900 series cards in this build, so we only have CUDA cards for the time being. 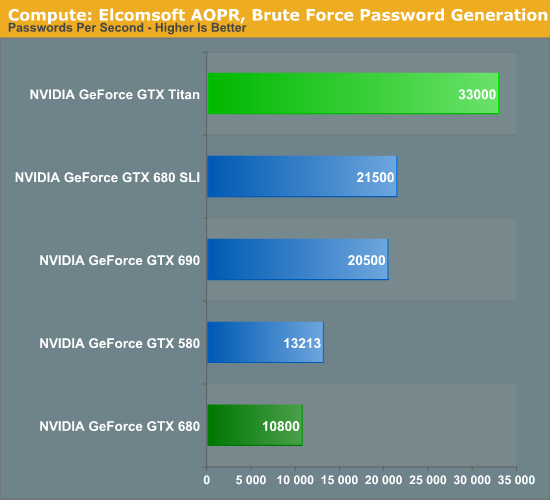 Password generation and other forms of brute force crypto is an area  where the GTX 680 is particularly weak, thanks to the various compute aspects that have been stripped out in the name of efficiency. As a result it ends up below even the GTX 580 in these benchmarks, never mind AMD’s GCN cards. But with Titan/GK110 offering NVIDIA’s full compute performance, it rips through this task. In fact it more than doubles performance from both the GTX 680 and the GTX 580, indicating that the huge performance gains we’re seeing are coming from not just the additional function units, but from architectural optimizations and new instructions that improve overall efficiency and reduce the number of cycles needed to complete work on a password.

Altogether at 33K passwords/second Titan is not just faster than GTX 680, but it’s faster than GTX 690 and GTX 680 SLI, making this a test where one big GPU (and its full compute performance) is better than two smaller GPUs. It will be interesting to see where the 7970 GHz Edition and other Tahiti cards place in this test once we can get them up and running.

Our final test in our abbreviated compute benchmark suite is our very own Dr. Ian Cutress’s SystemCompute benchmark, which is a collection of several different fundamental compute algorithms. Rahul went into greater detail on this back in his look at Titan’s compute performance, but I wanted to go over it again quickly with the full lineup of cards we’ve tested. 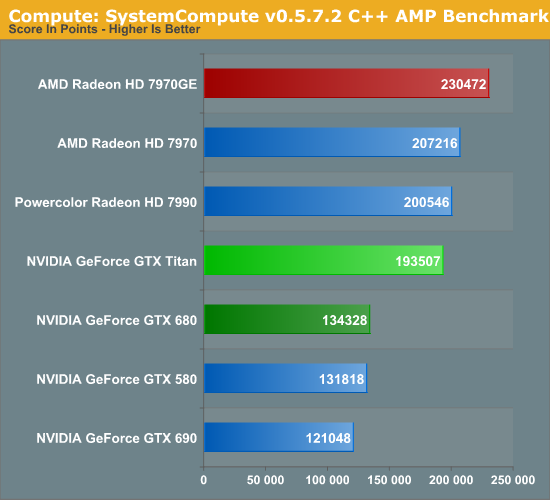 Surprisingly, for all of its performance gains relative to GTX 680, Titan still falls notably behind the 7970GE here. Given Titan’s theoretical performance and the fundamental nature of this test we would have expected it to do better. But without additional cross-platform tests it’s hard to say whether this is something where AMD’s GCN architecture continues to shine over Kepler, or if perhaps it’s a weakness in NVIDIA’s current DirectCompute implementation for GK110. Time will tell on this one, but in the meantime this is the first solid sign that Tahiti may be more of a match for GK110 than it’s typically given credit for.