With the One, HTC has taken an incredibly daring direction for camera. Last year’s One X, One S, and rest of the One series included an ambitious F/2.0 system, discrete ISP, and set an impressive imaging baseline. A full year later, few of the major players are shipping an F/2.0 system (though Nokia will ship an F/1.9 system later this year and has the F/2.0 Lumia 920), but with the One, camera is even more of a serious emphasis. In fact, the camera in the One is surprisingly perhaps the most interesting and ambitious feature of all, outclassing even the unibody aluminum construction. The short list of features on the HTC One camera that make it unique are an F/2.0 system with larger than the norm 2.0 micron pixels, optical image stabilization (OIS), and a new revision of imagechip. 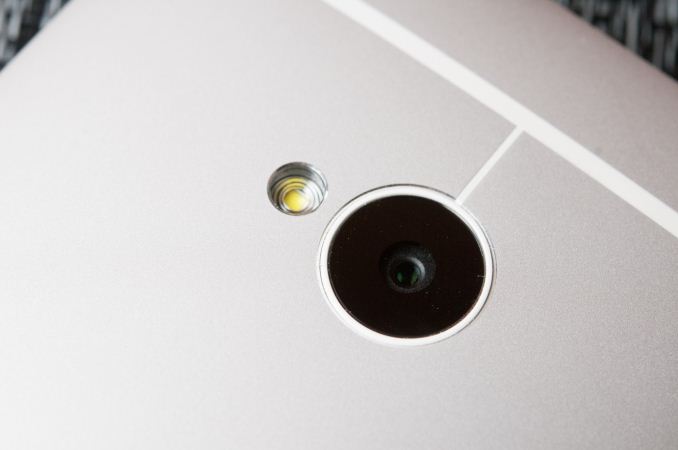 For years now, smartphone manufacturers have been moving to smaller and smaller pixels to increase the resolution of their cameras. It’s the megapixel race all over again, but in the smartphone platform. I gave a presentation at an industry event and laid out the general trends that I’ve seen smartphones taking for the past years. In general, there has been a progression from 1.75 micron pixels, to 1.4 micron pixels, now to 1.1 micron pixels on smartphone CMOS imagers. The result has been a steady increase in megapixels for the same 1/3” or 1/3.2” sensor size common for smartphones, from 5 MP to 8 MP to 13 MP, respectively, for those pixel sizes at the same optical format size. Conversely, OEMs can also deliver the same number of megapixels on a smaller and smaller sensor each generation, for example 8 MP at 1.4 microns on a 1/3.2“ sensor, or 8 MP at 1.1 microns on a 1/4” sensor. At the same time, smaller sensor means smaller z height required for the optics, which often is the thickest part of a design. There’s this constant battle between, you guessed it, industrial design and the camera system that goes in a smartphone.

Though improvements to quantum efficiency (think sensitivity, whether every photon is converted to an electron) at each successively smaller pixel size have mitigated some of the downsides from having smaller effective integration area for a pixel each time, there are still downsides to going smaller. Smaller pixels require an even better optical system to resolve that resolution, and already imaging onto pixels at 1.4 microns is really just oversampling. With the bayer color filter on top, you can make an argument that it isn’t really oversampling given the 2x2 nature of the array, but the reality is that we can’t image a spot onto a single 1.1µm pixel even with diffraction limited optics. Other downsides to smaller pixels are again a loss of sensitivity, partially from having a smaller integration area, partially from other things like the smaller active region for the sensor and a change in drive voltage. The other problem is loss of dynamic range before saturation occurs - already smartphones are operating with a dynamic range of around 5,000 photoelectrons. This means a very narrow range of brightnesses that can be represented inside the normal 10 bits of data shipped back from a given pixel at a given exposure.

The end result to this game is a ton of tradeoffs. In the case of the very high 13 MP cameras that are emerging today, we’re talking about an image that might not even be sharp outside in bright daylight if the optical system can’t resolve a high enough spatial frequency for the sensor, potentially very compressed dynamic range, and less and less sensitivity indoors in dim or low lighting. This year at the high end the trend is predominately 1.1 micron pixels, and basically any 13 MP camera you see in a smartphone is going to come with them. Likewise there’s a huge push for HDR this year in just about every mode (photos, videos, and panorama), and the reason is pretty much entirely to mitigate the fact that smartphone platform cameras just don’t have a lot of it before they saturate.

With the One camera, HTC has gone the other way entirely, instead moving up the scale to bigger 2.0 micron pixels while others move down to 1.1, while last year everyone primarily shipped at 1.4 microns. They’ve branded this the ‘UltraPixel sensor’, but really the important thing to think about is that the pixels are 4 square microns (2.0 x 2.0 micron) compared to the flavor-du-jour 1.21 square microns (1.1 x 1.1 micron) and thus have just over 3x the area. The result is, like anything else, a tradeoff but in the other direction - improved low light sensitivity and dynamic range at the expense of spatial resolution. At 1/3" sensor size, use of 2.0 micron pixels translates to 4.0 MP of resolution.

While some may decry the tradeoff of resolution for sensitivity and dynamic range, the reality is that we live in a world dominated by displays that are either 1080p, slightly above, or share via web-based services that dramatically downscale images for bandwidth reasons. The question is then how much resolution is really necessary given predominately electronic displays start to finish and lack of much printing or enlargement. At least for my workflow, 4 or 5 MP seems more than adequate for most sharing, especially if it’s sharp and ends up having good dynamic range, and that’s still enough resolution to downsample to 1080p and get an even sharper-looking image. There’s also a case to be made for storage requirements which are lighter and so on, but most of that is obvious. The benefits from having more sensor sensitivity are also immediate – no need to fire the distracting flash in a restaurant or at a party, shorter exposure times with less blurring, quicker follow up shots, more accurate preview, and so on.

When I heard that HTC was taking their camera this direction, I was incredibly excited. Not only is this completely bucking the camera trend that just about every other OEM seems satisfied with marching down just for marketability reasons, it’s actually sound science and possibly the best way to end the megapixel myth in the smartphone space. Unfortunately the flip side is that, obviously, HTC now has to fight the megapixel myth head on. This is incredibly difficult to market to most normal consumers since megapixels is just about the only parameter ever exposed to them, and marketing was probably the biggest problem with HTC’s lineup last year. Conveying the Ultrapixel message will require more than a branded name and carefully avoiding talking about the fact that the camera is 4.0 MP on the box or online specifications (as it is now), it will require real education and an active role in building credibility in the imaging space. It will also require real demonstrable benefits to consumers in use cases that matter to them.