Battery life is one of those things that consistently ranks among the highest in consideration for a mobile device. At the same time, OEMs still seem largely unwilling to double or triple battery capacities between generations, or go the Motorola route and offer two different models with double capacity. The story of smartphones is again this continual competition between everything and the industrial design.

With the One, HTC has gone again to its pyramidal stack of display, then battery, then PCB. The result is the familiar curved backside from where the PCB sits, and a large, thin battery sandwiched between the display and PCB. 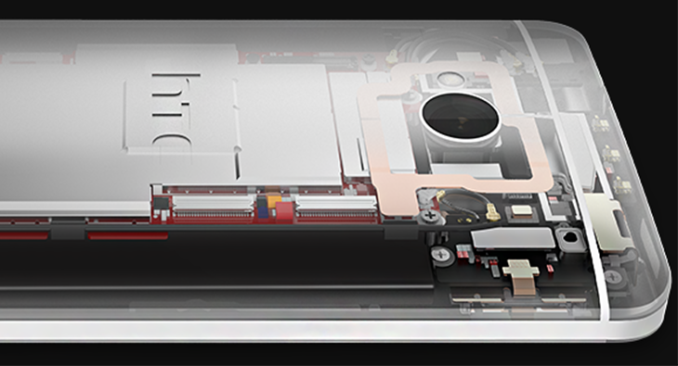 The HTC One moves to a 2300 mAh, 3.8V (the higher nominal chemistry that everyone has moved to) lithium-ion polymer battery, giving it a capacity of 8.74 watt-hours. It’s obviously internal and not easily user-replaceable. Of course, battery size doesn’t entirely dictate battery life, it’s just a larger electron tank to draw from. What ultimately is a more interesting is how efficient the platform is which draws from it.

The thing about HTC and battery life specifically is that as of late they’ve been penalizing themselves on the display side of things, which is the single largest consumer of power in a device. A number of other OEMs artificially clamp display brightness just to set a better higher bound for battery life, and for example HTC’s display auto brightness function doesn’t have as much dynamic range as the slider being actuated manually. The result is a phone that’s brighter than it needs to be a lot of the time. On the software side HTC does have system optimizations that do things like batch up network traffic so that the phone isn’t going into a constant cellular connected state and burning power for an app written by a developer who doesn’t know anything about cellular connection state tables, and strategies like suspending the cellular data connection when on WiFi or when the phone is in standby for long periods.

To find out where the HTC One sits in the battery life spectrum, we turn to the newest version of our battery life test. This is now our sixth revision of the battery life test, and we feel is the optimal balance between challenging workloads and idle time. The basic overview is the same as the previous test — we load webpages at a fixed interval until the handset dies, with display set at exactly 200 nits as always. Power saving features (in this case the HTC Power Saver) are disabled if they turn on automatically, and background account sync is disabled. The test is performed over both cellular data on all available air interfaces and over WiFi in an environment with good signal levels. The new test has decreased pause time between web page loads and added a number of JavaScript-heavy pages. I sat down with some UMTS RRC (Radio Resource Control) emulator tools and also made sure we had a good balance of all the RRC states (DCH, PCH if possible, FACH, IDLE) so we weren’t heavily biased towards one mode or the other.

I’ve included the HTC DNA in the fray as well since I’ve had those numbers for a while. Let’s start with the WiFi test, where we attach the device to a dedicated WiFi network with no other clients. 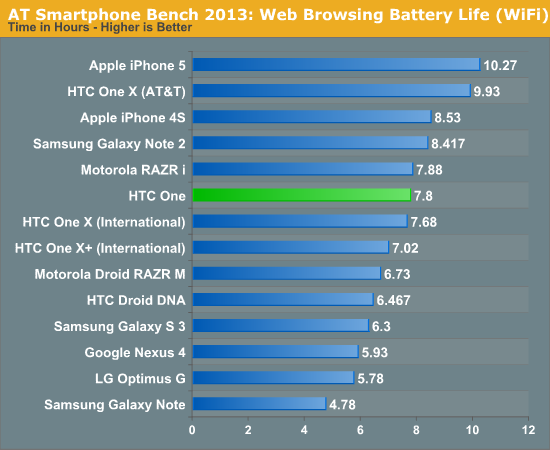 The One includes the newest BCM4335 WiFi/BT/FM combo from Broadcom, which is still built on a 40nm process. For the purpose of the battery life test I attached the One to the same AP as I’ve always used, however I will repeat with my 802.11ac AP in due time to see whether the shorter duty cycle afforded by a much higher PHY rate makes any difference. 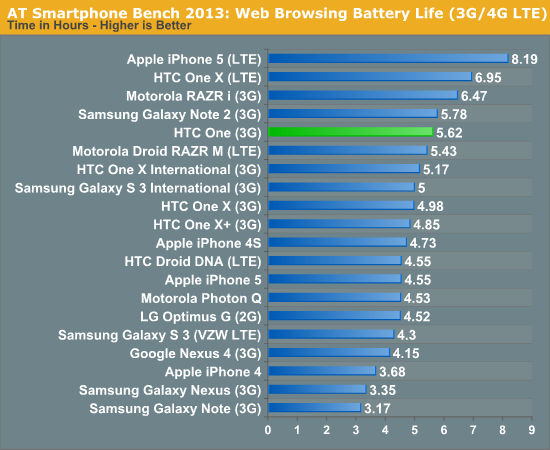 On cellular data the One isn’t bad at all, looking at the 3G result from final hardware and final software. I consider this pretty good all things considered for the HTC One, and mirrors my experience. 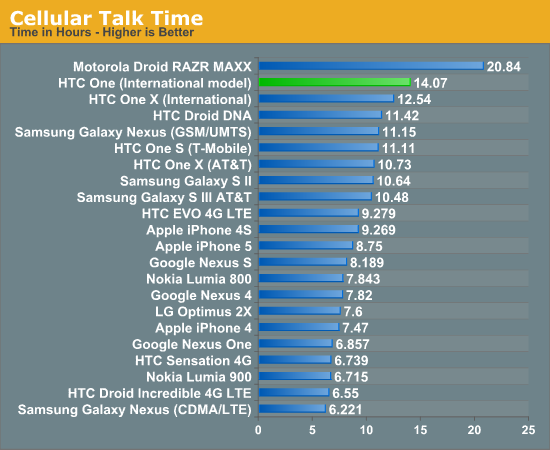 On cellular talk time the One really shines, coming in well ahead of almost everything else. This is an impressive result. 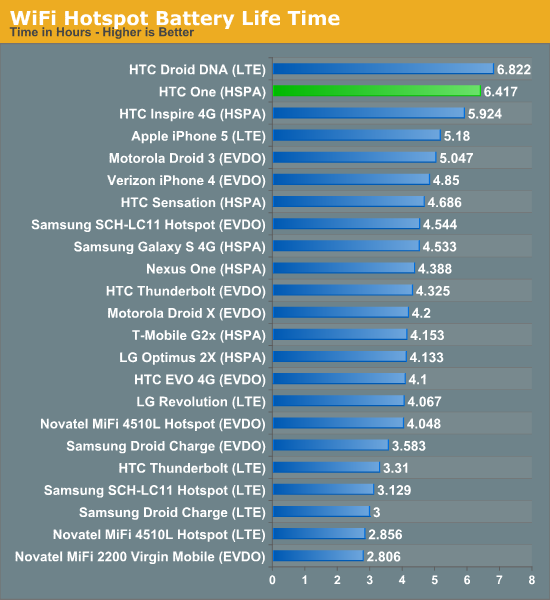 As a hotspot once again we have great battery performance. This test consists of four of the page loading tabs running on an attached notebook in addition to 128kbps streaming MP3 audio being played on the device. This is a challenging test that results in the cellular connection being lit up almost constantly, and isolates out display.

My subjective impressions using the HTC One as my personal device are that battery life is quite good, and moreover that the DNA battery life also was better than some other phones people had no problems with in 2012. I have yet to have an issue making it through an entire day on the HTC One, even when aggressively using the camera. If I knew I was going to be away from the charger for a long time, I did enable the power saver, which sets max CPU clock on the Snapdragon 600 to around 1.3 GHz in addition to lowering brightness a little bit, and a few other things as shown in the previous screenshot. In practice I really don’t notice much of a performance difference with the power saver box checked unless I’m really looking for it, but this probably dumps the SoC into a better voltage state to say nothing of how much lower active power is.

Charging on the HTC One takes a little while longer than I’m used to for other devices. I get lots of requests to do charging tests and have been running them on everything I can lately, but anything power related remains an involved process. To test the best case charge time, I have a dedicated power supply voltage limited to 5V and capable of supplying a lot of current. I emulate the USB BC1.2 charging spec on a breadboard and connect USB to the device, then time how long it takes to charge devices completely. I plug the phone in after it dies running our battery life test, and time the amount of time from that fully dead, won’t-turn-on state to fully charged, either with a green LED or when charge current goes to zero for devices without a charge status LED. 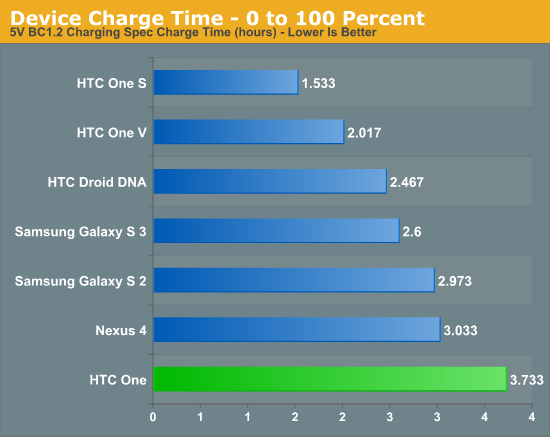 The HTC One definitely takes a while to charge. What’s interesting however is that the charge curve gets the One to 85–90 percent under the normal 3 or so hours, it’s that last ten percent that takes forever. I also have confirmed that Qualcomm’s Quick Charge is not being used on the HTC One, for whatever reason, possibly to maximize compatibility with the portable USB battery chargers that are now proliferating. The PMIC is there, it just isn’t enabled. My guess would be that HTC wants to prioritize battery longevity and minimize any even potential extra wear since the battery on the One is sealed inside.