The HTC One sensor is 16:9 aspect ratio natively, not the usual 4:3 we’re used to seeing for sensors, with a resolution of 2688 x 1520, for 4.08 MP. I did a lot of digging around on the device and found that the rear facing CMOS is made by ST Microelectronics, it’s the VD6869. This is the 1/3.0” format sensor with BSI and 2.0 µm x 2.0 µm pixels. I asked ST for more information about VD6869 and couldn’t get any information about the sensor, which tells me this is very likely a part made specifically for HTC’s One. Chipworks tore down a One and confirmed the presence of an ST CMOS, which confirms what I've seen inside in software. 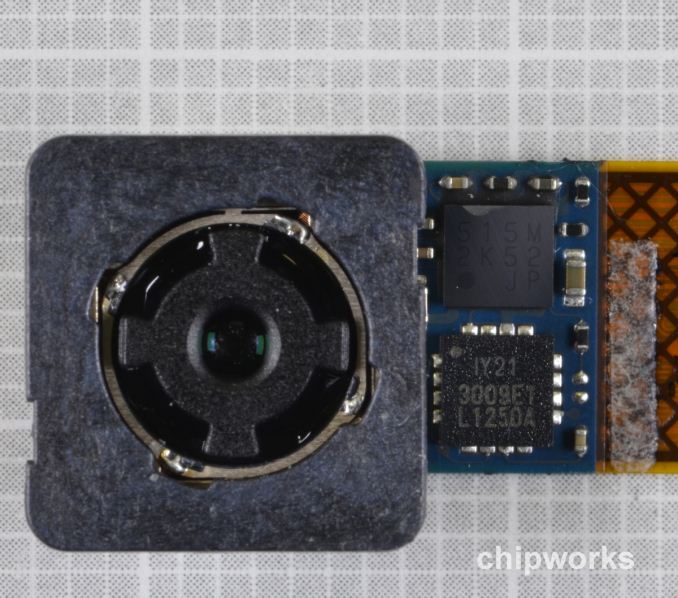 Even more interestingly, OmniVision announced a 4.0 MP CMOS sensor which matches the VD6869 specs identically, the OV4688, which has the same size (1/3”), resolution (2688 x 1520), pixel size (2.0 micron), and a line about sensitivity being 40 percent higher on the 2.0 micron pixels compared to OV’s 1.75 micron pixels. There’s still no real information about sensitivity or saturation, but I suspect that OV4688 might become an alternate supply source if ST can’t produce VD6869 in quantity.

The optical system on top of that CMOS is a 5P (5 plastic element) lens system with F/2.0 aperture and 3.82mm focal length, which when combined with the 1/3.0” CMOS crop factor of 7.21 gives a 35mm equivalent focal length of 27.54mm. HTC rounds up and calls this 28mm inside EXIF and on their own spec page. I still feel like something closer to 35 mm effective would be more natural for shooters, however the realities of thinner modules and the z-height problem make it a difficult sell.

The One also has OIS which can accommodate +/- 1 degree of deviation and has its own dedicated gyroscope which polls at 2 kHz for making corrections. You can actually see OIS working if you look at the module while the camera preview is going and slightly deviate the phone — it’s quite surreal to watch the system make a reverse accommodation to the angle you’ve deviated the phone. The camera system in the One is capable of doing 8 FPS full resolution image capture as well. Image capture is on the HTC One is extremely speedy, in fact shot to shot latency is incredibly short. This is partially thanks to the prioritization of fast exposure times in the Auto mode unless Night mode is used.

On the front facing camera, we have an OmniVision OV2722 CMOS which is 1/5.8” in size with 1.4 µm x 1.4 µm pixels and an imaging area of 1932 x 1092, though output images are 1920 x 1088 since this oversized sensor is for accomodating EIS (electronic image stabilization) and rolling shutter correction. On top of that is an optical system of an unknown number of elements with F/2.0 aperture, and focal length around 1.59 mm, which gives the tiny sensor an effective focal length of around 22 mm and 88 degree full field of view. 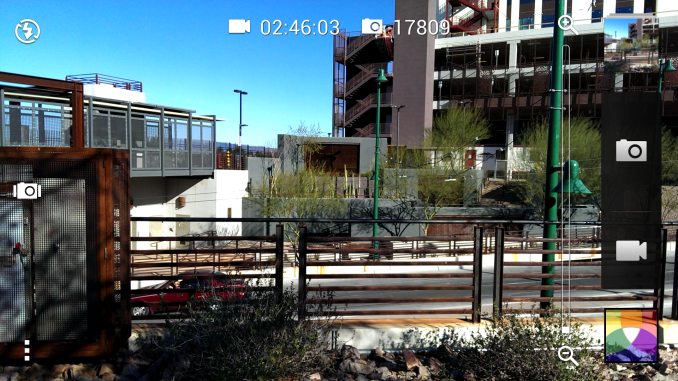 Camera UI on the HTC One has changed slightly with Sense 5. The preview is 16:9 and fills the whole screen, so this time around there’s no need to go and toggle a setting to get the full sensor output. In fact, this time around the 4:3 and square settings are crops of the 16:9 native output. Most of the UI is visually similar to previous HTC cameras, and functionally not a lot is changed. You can now drag from the edge to change between front and rear facing cameras, which is a nifty gesture. On the left side are the flash control, Zoe mode button, and menu, err “action button” which exposes the rest of the settings. 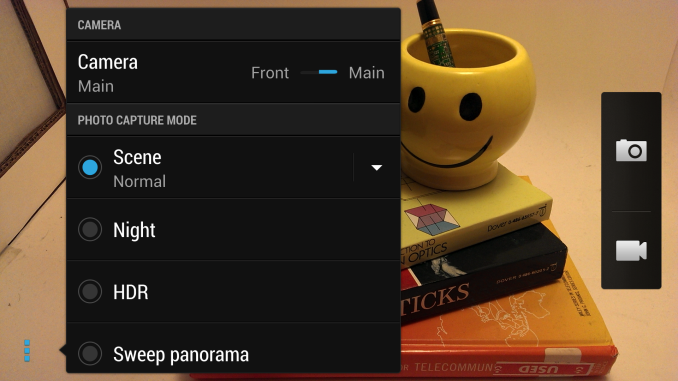 As I’ll talk about in a moment, I find that although HTC has lightened up on the sharpening each year, it’s still a bit much for my preferences. With the setting at –2 it appears that sharpening is turned off entirely. If you look at the edge of the lettering it’s immediately obvious how much of a difference this makes. 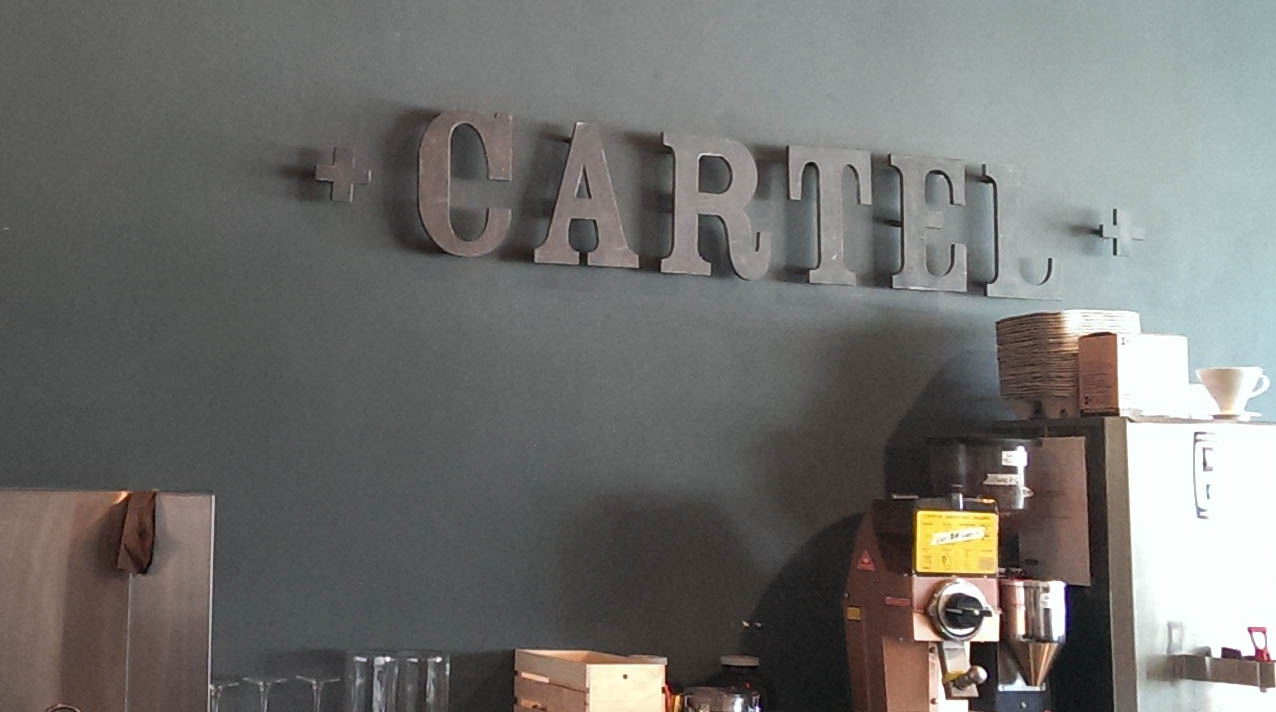 The photo modes are pretty self explanatory. Normal is something of a safe default and balances shorter exposures and ISO, Night enables much longer exposure times and keeps ISO down at the same time. HDR is is the typical multi-frame capture and recombination to add detail in regions that are over or under exposed.

I also borrowed NVIDIA’s HDR demonstration at GTC to take a series of images demonstrating HDR for still images. You can see how HDR mode combines multiple exposures for an equivalent image with more dynamic range than either of the parts. 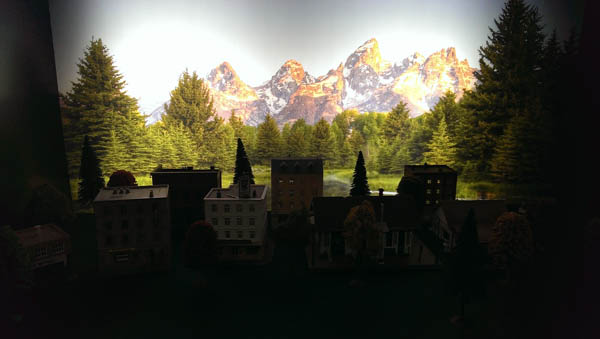 I still find myself wishing that HTC had an AF/AE lock gesture for the camera UI, and there are still some quirks in the interface. At the end of the day I wish we could have a smartphone UI expose all of the manual exposure settings (exposure time is the big one) and not just a subset. I’m fine with either full auto being the default setting for normal shooters but would still love an expert mode with manual controls that expose everything, especially because at present the Android camera APIs simply doesn’t expose enough for third party camera apps to be very powerful.

Let’s talk about imaging performance on the HTC One. To evaluate this we turn to our usual camera bench photo locations, lightbox test with the lights on and off, and test charts. In addition I spent a lot of time taking side by side comparisons with the HTC One alongside some other good low light performers out and about. I also shot a lot of photos just around town with the HTC One in my pocket to get a good feel for camera performance, and to understand the various camera modes since they aren’t overtly documented. I should also note that I am reviewing the final HTC One hardware with final camera module, and launch software. This is the retail unit and retail software which is already shipping in EMEA markets. That said, there are going to be future tweaks to the imaging pipeline, especially OIS on the HTC One during its product cycle, but this is what is shipping today.

In the smartphone camera bench album, note that only locations 3, 4, 5, and 7 were available for use. The real world bench photos look subjectively good to me, final hardware has fixed most of the issues with the left or right side of the image being slightly soft or out of focus. Location 3 doesn’t have too much noise in the sky or homogenous parts of the image, location 4 has some slight moire and color rainbowing in the grating, it’s in location 7 that I see a lot of sharpening going on which affects the readability of the menu beyond just the loss of resolution from the camera being 4 MP. In outdoor broad daylight, the HTC One is admittedly at a bit of a disadvantage if you’re looking at things 1:1 on a high resolution display. On a 1080p display or shared on Twitter however, the images from the One are more than adequate.

In the lights on camera box, the HTC One does a good job at getting the white balance right, something a few cameras still struggle with for some reason. Detail on the focusing ring of the Exakta is visible, though it’s obvious there’s some sharpening going on. Dynamic range looks really good here, I can see detail in the texture of the black camera body without the background becoming a saturated blob, although there’s still some visible noise reduction at work here which doesn’t make sense since this image was taken at ISO 101. In fact that’s my one big overriding thought about the HTC One by default, there’s a strange combination of noise reduction and sharpening going on at some times, and at first I thought this was overly aggressive JPEG compression, until I learned this is set at 95-percent quality. It is definitely noticeable in the homogenous color regions and textures which there are a lot of in the lights on test photo.

With the lights off, the HTC One oddly continually underexposed the image with the flash on. My other issue is that HTC continues to not light the LED for AF assist during focus, meaning that there were a bunch of out of focus shots before I finally obtained an in-focus shot out of luck. AF assist LED should be an option in the camera menu, though admittedly on the HTC One as we’ll show in a moment you really don’t need the flash unless you’re shooting in absolute complete darkness. In fact, in my time with the HTC One I pretty much kept flash off all the time (looking at EXIF for all the images I’ve taken reveals only 10 where flash fired), since the color cast of an LED flash to me is ugly and the One has enough low light performance to take good photos in natural lighting even in scenes which previously would’ve required a flash.

In the distortion chart we can see that the One follows some other devices and has a bit of pincushion at the center but is pretty well controlled at the edges. There’s some softness in the top left corner and bottom right, but this is still something I see a lot of on devices. On the GMB color checker image I see some noise in a few of the solid color boxes, and white balance is a bit off, which is interesting since the One nailed white balance in other scenes in the same box with the same light source.

If we look at crops of the spatial resolution in saggital and tangential orientations from the ISO12233 chart, we can see that the One starts to alias around the 12 or 13 mark (units of line pairs per image height), and other 8 MP shooters alias around the 15 mark or just above. That’s not too much of a surprise however given the fact that it’s a 4 MP camera compared to higher resolution cameras. We can see some odd little demosaicing artifacts as the two lines start to alias as well (the maze-looking pattern).