At IDF last year we got word of Ivy Bridge's transistor count (1.4 billion), however today we know its die size: 160mm2. That's 75% the size of a quad-core Sandy Bridge, but with 20% more transistors.

This marks the first time since 2006 that Intel is offering a high-end desktop CPU with this small of a die size. I'm excluding the 6-core parts from the discussion since that line isn't really aimed at the same market anymore. The chart is even more insane when you consider the Ivy Bridge die size includes an integrated GPU alongside four of the highest performance x86 cores Intel has ever shipped. Remove the GPU and Ivy Bridge is even smaller than Conroe. A hypothetical GPU-less Ivy Bridge would measure in at roughly 113mm^2 chip on its 22nm process, making it smaller than any high-end Intel CPU since the days of the Pentium 3. 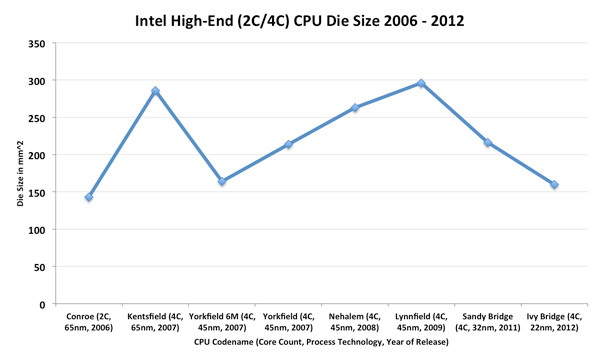 Ivy Bridge is tiny—but what does this mean? For starters, it means the obvious—Intel has little competition in the desktop space. I'm always hard on AMD in my meetings with them because of this reason alone. A less than competitive AMD means we get a less aggressive Intel.

More importantly however, a tiny Ivy means that Intel could have given us a much bigger GPU without breaking the bank. I hinted at this possibility in our Ivy Bridge architecture article. Unfortunately at the time only Apple was interested in a hypothetical Ivy Bridge GT3 and rumor has it that Otellini wasn't willing to make a part that only one OEM would buy in large quantities. We will eventually get the GPU that Apple wanted, but it'll be next year, with Haswell GT3. And the GPU that Apple really really wanted? That'll be GT4, with Broadwell in 2014.

All of this being said however, we must keep in mind that Ivy Bridge is both faster than Sandy Bridge and no more expensive. If we look at the supply and pricing constraints that accompany TSMC's 28nm process, the fact that Intel is able to ramp up 22nm and ship the first products without any price increase is something we shouldn't take for granted.