Starting with our 2x2:2 2.4GHz Netgear WNR3500L router, testing as expected was particularly variable on the 2.4GHz spectrum. For this test, the router was set up in an upstairs room of my house with no Internet connectivity. The laptops were tested individually (except for the latency test, where a second laptop was also powered on—we used the Bigfoot 1102 equipped laptop, though informal testing suggests the choice of second laptop was irrelevant), at a distance of around five feet from the router.

I adjusted the position and orientation of the laptops during testing in order to achieve what appears to be a best-case result. The connection speeds achieved are as follows: Atheros, 300Mbps; Bigfoot, 300Mbps; Intel 1030, 144Mbps; Intel 6230, 144Mbps; Intel 6300, 300Mbps; Realtek, 144Mbps. You’ll notice that several of the cards were not able to connect at their maximum theoretical speed, specifically the Intel 6230 had issues here on both laptops with that controller, and the Realtek and Intel 1030 connect at 144Mbps instead of 150Mbps. The 6300 does obtain a 300Mbps connection, which is the maximum supported by the Netgear router, and the Bigfoot and Atheros cards also link at 300Mbps. Part of the issue here is the use of 40MHz channels, which are often difficult to maintain in the real world. When the wireless driver (and/or router) detect enough interference to switch to 20MHz channels, you lose a lot of potential bandwidth. Despite numerous reboots and other tweaking, we never could get some of the devices to maintain a 300Mbps connection. With that out of the way, here are the results. 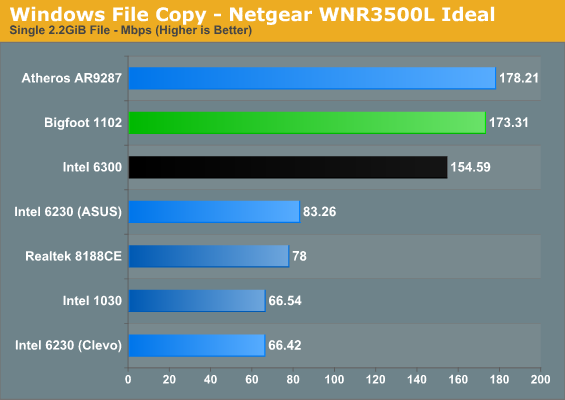 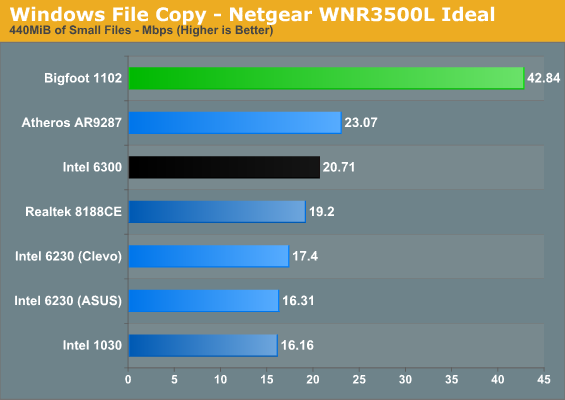 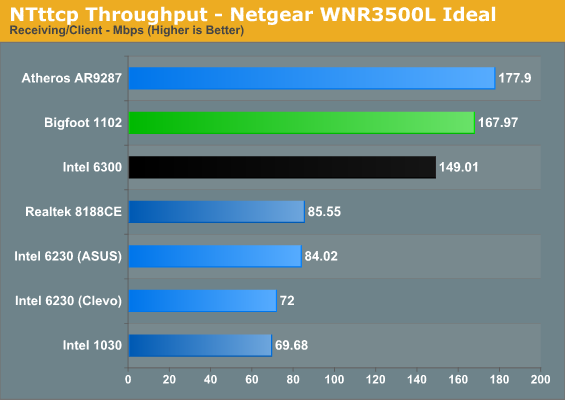 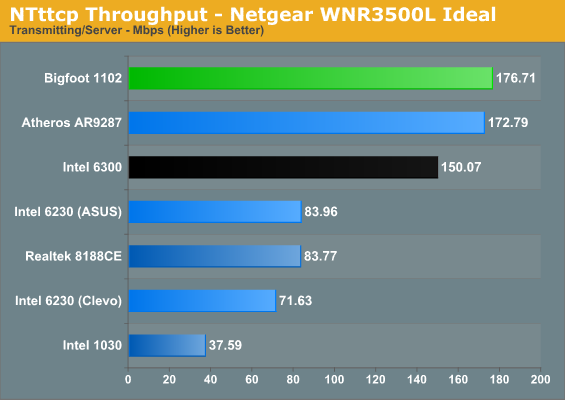 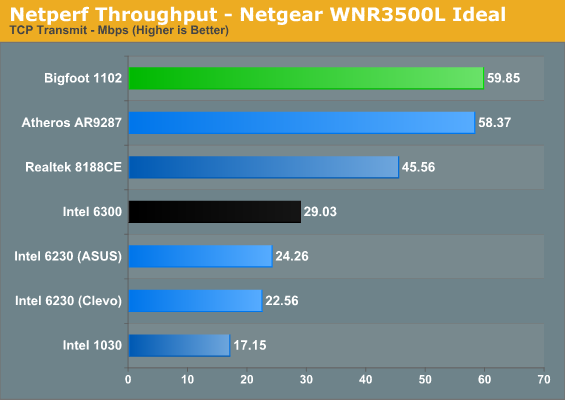 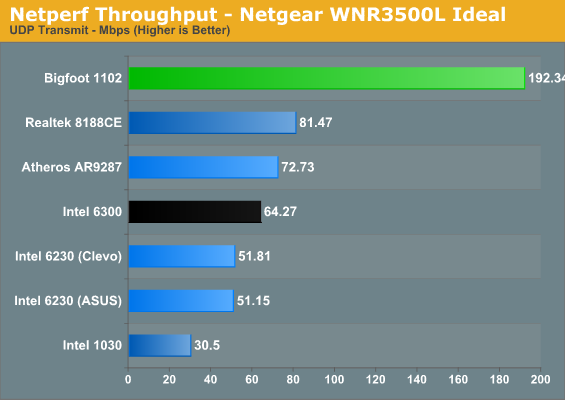 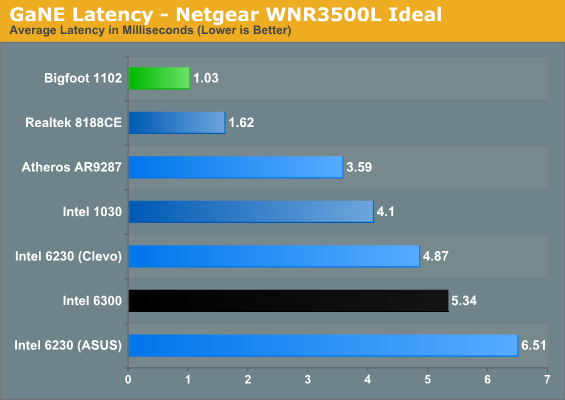 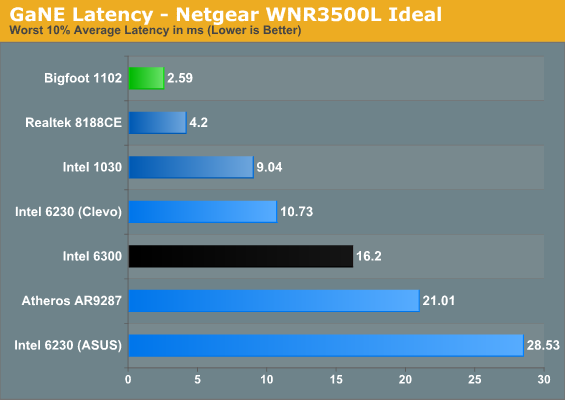 Straight out of the gate, we see a separation develop among the various contenders. At the top of nearly every chart sits the Bigfoot Killer 1102; if it doesn’t outright win, it at least places so close as to be nearly a tie. Keep in mind again that wireless performance is prone to variance, so anything within 5% is close enough that you don’t need to worry much. As noted above, the 6230 would only link up at 144Mbps, which definitely hurts raw throughput; even so, the ASUS K53E appears to work better overall than the Clevo W150HM unit does, showing that not all laptop antennae are equal.

There are two specific tests where the Bigfoot 1102 walks away with the performance crown. The first test is latency, with the 1102 coming very close to wired Ethernet levels of latency (we’ll show those later). The next closest contender for latency is the Realtek solution, and you likely wouldn’t notice the difference. The catch is that there are other areas where the 1102 beats the Realtek quite handily, but we’re getting ahead of ourselves. Outside of the Realtek 8188CE, the Bigfoot 1102’s worst performance is better than the best results from all of the other solutions.

During GaNE testing, virtually every other wireless solution shows occasional spikes of anywhere from 20 to 100+ ms, usually lasting for 5-10 seconds. The Bigfoot 1102 actually showed the same issue, but when we used the Killer Network Manager and set the priority of GaNE to 1 (highest), latency dropped to what we’re reporting above. What’s causing these spikes? It might be Windows searching for other wireless networks; we’re not sure. However, we do have an interesting real-world test that corroborates the GaNE latency results.

If you look at the NTttcp maximum throughput tests, several of the 300Mbps devices are close together. The Atheros AR8132, Bigfoot 1102, and Intel 6300 are all about twice as fast as the other wireless devices. Look at the single large file copy throughput and those same three controllers rise to the top. What’s interesting is what happens when we start copying a lot of smaller files. Suddenly it’s not a question of throughput but is instead how quickly the copy process can transfer each file. Watching the real-time throughput in the networking tab of Windows Task Manager (add the “Bytes Sent/Received per Interval” columns to see this), the lowest throughput on the 1102 is at least double and often triple what the other controllers manage. When you’re copying files and directories, Windows opens a network stream, starts receiving data, and then closes the stream for each file (there might be some other steps, but that description will suffice). If each of those steps ends up taking a few extra milliseconds, multiply that by 9000 and suddenly the process ends up going a lot slower when you have poor latency. In fact, given we’re only transferring 440MiB of data, it appears that the latency/handshaking process takes up around 60 seconds on the Bigfoot 1102 and over 140 seconds on the next closest competitor. Ultimately, GaNE does appear to correlate well with real-world testing.

So do we have a winner in the Bigfoot 1102? If you happen to have a 2x2:2 2.4GHz router (which is probably the most common 802.11n router type) in the same room, the answer is a definite yes. A couple other solutions can come close in terms of pure bandwidth, but the combination of low latency, consistency of connection, and stability offered by the Killer 1102 can’t be beat. Anyone running one of the controllers that only support a single spatial stream (e.g. the Intel 1030 and Realtek 8188CE) will obviously not come close to the same level of performance as the Bigfoot 1102. If you’re after better wireless performance, getting a Killer Wireless-N in your laptop appears to be a good step…but what happens when we move into a different room and obstruct the signal?