Intel kicked off day two of its Spring IDF with some announcements about its next Centrino platform, codenamed Santa Rosa, and its successors. 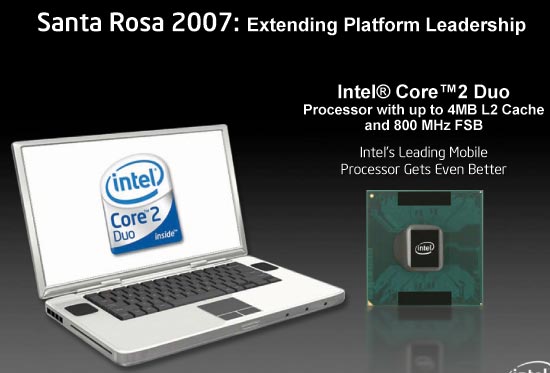 As we all know by now, Santa Rosa is the 2007 Centrino platform, which will officially start shipping in May. Santa Rosa is composed of Intel's Core 2 Duo processor, the mobile Intel 965 Express chipset, Intel's Wireless-N networking, Intel's Gigabit Ethernet as well as optional Intel Turbo memory. The latter is now the official marketing name for Intel Robson technology, which is on-motherboard NAND flash memory that can be used by Vista to speed up the OS via ReadyBoost or ReadyDrive. 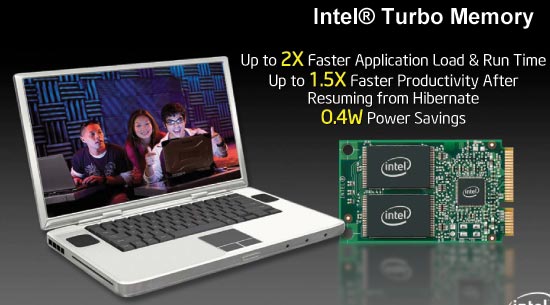 In the first half of 2008, Santa Rosa will get a refresh to support mobile Penryn processors. Currently Intel is only indicating updated processor support with the Santa Rosa refresh; the rest of the components may remain unchanged. 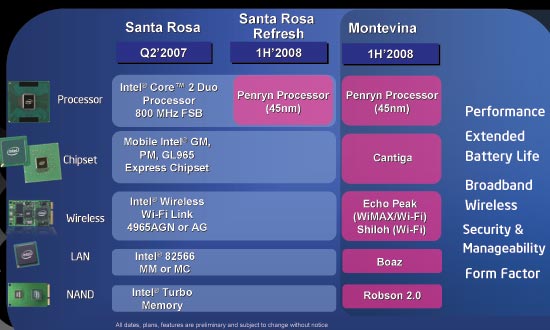 After the Santa Rosa refresh, also currently scheduled for 1H 2008, is the Montevina platform. Montevina will also support Penryn but it will be equipped with a mobile version of Intel's P35 chipset, codenamed Cantiga. Cantiga will bring about DDR3 memory support which may actually be attractive in notebooks due to lower power consumption. The real killer in Montevina is WiMAX support, which will hopefully enable very wide area wireless network access on notebooks in areas where there aren't localized 802.11 networks. Montevina will also bring updated Ethernet controllers and a second generation Robson technology.

The close proximity of the Santa Rosa refresh and Montevina launches does confuse us a bit, and we're skeptical of whether or not Intel will stick to this schedule. Two new Centrino platforms in a 6-month window just doesn't seem like a good idea.