Fixing UMPCs and a new type of UMPC

With Centrino Intel learned a very important lesson: to conquer a vertical market, you must do so with a very targeted architecture. The days of simply designing one microprocessor architecture and scaling it up and down to hit a variety of market segments are long gone. Intel conquered and expanded the mobile market by designing a new processor architecture that was power optimized, and simply maintained ISA compatibility with Intel's other processors. Eventually what made its way into Centrino and ended up going back into desktops and servers as well, but not until after a significant evolutionary process.

There's a new market that Intel first started talking about 1.5 years ago, back then it made its appearance on this slide as the "Handtop" market: 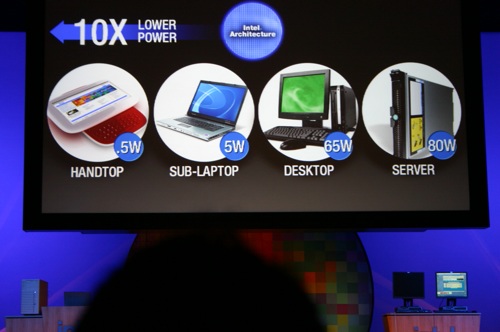 A year later, the Ultra Mobile PC (UMPC) was born, but unfortunately not into much success. In order for the UMPC to succeed it needs to have three things done right:

The UI of the initial UMPCs was absolutely horrible, as they were all running Windows XP on very small, high resolution displays. Just as Intel discovered that you can't hide a boat with a car cover, Microsoft learned that you need a targeted UI as you address different markets (e.g. 10-ft UI for Media Center). The UMPC launch was not met with a Windows UMPC Edition and thus the UI requirement of making a successful device remained unfulfilled.

You also want these UMPCs to give you a similar experience to your desktop or notebook PC; they need to be fast and responsive. If a UMPC is going to have a full version of Windows running on it, then the hardware requirements (and cost) go up in order to keep the level of experience high. Unfortunately, UMPCs were basically built out of low power notebook parts, which as we mentioned from Intel's Centrino lesson, that's simply not the key to making a successful platform.

Finally the ergonomics on virtually all UMPC devices were just bad. The units were either too big or were in no way comfortable to use. Part of this requirement really depends on the hardware, and given that the first generation of UMPCs were built out of fairly stock notebook components they weren't optimally sized. With greater integration on the processor and chipset side, it's possible to reduce form factor much more.

Clearly the problem with UMPCs can't be solved by Intel alone; it will take an industry-wide effort to really make these devices successful but when it happens, the market will be huge. There is a very large gap between smartphones and notebooks; in the quest for being able to access all of your content, anywhere you go, you often need something that's a bit more powerful than a smartphone but not necessarily much bigger. You don't want to pull out your notebook simply because it is too big of a device for quick use, not to mention that there may be times when it doesn't follow you around. If the above requirements are met, UMPCs could evolve into something that could fill this gap (they may end up being the new smartphones down the line).

Intel also talked about a new type of ultra mobile device: the mobile Internet device (MID). Intel views MIDs as an alternative to UMPCs specifically to be used for primarily accessing the internet. MIDs will run Linux to help keep hardware costs down.