by Gary Key on April 2, 2007 3:30 AM EST
37 Comments | Add A Comment
37 Comments + Add A
Comment
When the first 680i SLI motherboards were launched back in November they offered an incredible array of features and impressive performance to boot. However, all of this came at a significant price of $250 or more during the first month of availability. We thought additional competition from the non-reference board suppliers such as ASUS, abit, and Gigabyte would drive prices down over time. The opposite happened to a certain extent with the non-reference board suppliers, as prices zoomed above the $400 mark for boards like the ASUS Striker Extreme. The reference board design from suppliers such as EVGA and BFG has dropped to near $200 recently but we are still seeing $300 plus prices for the upper end ASUS and Gigabyte 680i boards.

ASUS introduced the P5N32-E SLI board shortly after the Striker Extreme as a cost reduced version of that board in hopes of attracting additional customers. While this was a good decision, that board did not compete too well against the reference 680i boards in the areas of performance, features and cost. With necessity being the mother of all inventions, ASUS quickly went to work on a board design that would offer excellent quality and performance at a price point that was at least half that of the Striker Extreme.

They could not get there at the time with the 680i SLI chipset and the recently released 680i LT SLI cost reduced chipset was not available so ASUS engineered their own version that would meet a market demand for a sub-$200 motherboard that offered the features and performance of the 680i chipset. They took the recently introduced 650i SLI SPP (C55) and paired it with the 570 SLI MCP (MCP55) utilized in the AMD 570/590 SLI product lines. ASUS called this innovative melding of an Intel SPP and AMD MCP based chipsets their Dual x16 Chipset with HybridUp Technology. Whatever you want to call it, we know it just flat out works and does so for around $185 as you will see in our test results shortly. 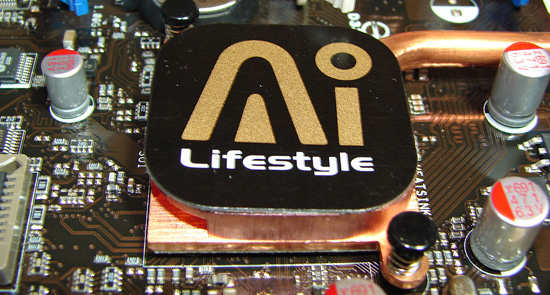 Before we get to our initial performance results and discussion of the ASUS's P5N32-E SLI Plus hybrid board design we need to first explain the differences between it and the 680i/680i LT motherboards. In an interesting turn of events we find the recently introduced 680i LT SLI chipset also utilizing the nForce 570 SLI MCP with the new/revised 680i LT SPP while the 680i SLI chipset utilizes the nForce 590 SLI MCP and 680i SLI MCP.

With the chipset designations out of the way, let's get to the real differences. All three designs officially support front-side bus speeds up to 1333MHz, so the upcoming Intel processors are guaranteed to work and each design offers very good to excellent overclocking capabilities with the 680i SLI offering the best overclocking rates to date in testing. Each board design also offers true dual x16 PCI Express slots for multi-GPU setups with ASUS designing the dual x8 capability on the 650i SPP as a single x16 setup with the second x16 slot capability being provided off the MCP as in the other solutions. We are still not convinced of the performance advantages of the dual x16 designs over the dual x8 offerings in typical gaming or application programs. We only see measurable differences between the two solutions once you saturate the bus bandwidth at 2560x1600 resolutions with ultra-high quality settings, and even then the performance differences are usually less than 5%.

The 680i SLI and the ASUS hybrid 650i boards offer full support for Enhanced Performance Profile (SLI-Ready) memory at speeds up to 1200MHz with the 680i LT only offering official 800MHz support. However, this only means you will have to tweak the memory speed and timings yourself in the BIOS, something most enthusiasts do anyway. We had no issue running all three chipset designs at memory speeds up to 1275MHz when manually adjusting the timings.

Other minor differences have the 680i SLI and ASUS Plus boards offering LinkBoost technology that has shown zero to very minimal performance gains in testing. Both boards also offer a third x16 physical slot that operates at x8 electrical to provide "physics capability" - something else that has not been introduced yet. Fortunately this slot can be used for PCI Express devices up to x8 speeds so it is not wasted. Each design also offers dual Gigabit Ethernet connections with DualNet technology and support for 10 USB devices. The 680i LT SLI design offers a single Gigabit Ethernet, support for 8 USB devices, and does not support LinkBoost or a third x16 physical slot.

What we basically have is the ASUS hybrid design offering the same features as the 680i SLI chipset at a price point near that of the feature reduced 680i LT SLI setup. This leads us into today's performance review of the ASUS P5N32-E SLI Plus. In our article today we will go over the board layout and features, provide a few important performance results, and discuss our findings with the board. With that said, let's take a quick look at this hybrid solution and see how well it performs against the purebreds.