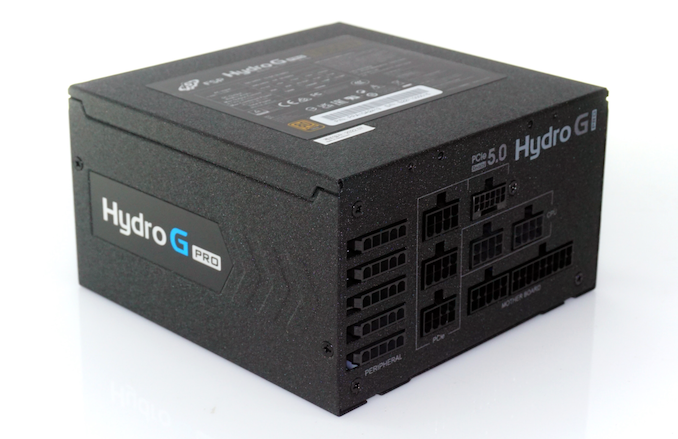 With the ATX 3.0 era now well underway, we've been taking a look at the first generation of ATX 3.0 power supplies to hit the market. Introducing the 16-pin 12VHPWR connector, which can supply up to 600 Watts of power to PCIe cards, ATX 3.0 marks the start of what will be a slow shift in the market. As high-end video cards continue to grow in power consumption, power supply manufacturers are working to catch up with these trends with a new generation of PSUs – not only updating power supplies to meet the peak energy demands of the latest cards, but also to better handle the large swings in power consumption that these cards incur.

For our second ATX 3.0 power supply, we're looking at a unit from FSP Group, the Hydro G Pro ATX 3.0. Unlike some of the other ATX 3.0 PSUs we've looked at (and will be looking at), FSP has taken a slightly different approach with their first ATX 3.0 unit: rather than modifying its best platform or releasing a new top-tier platform, FSP went with an upgrade of its most popular platform, the original Hydro G Pro. As such, the new Hydro G Pro ATX 3.0 1000W PSU doesn't have especially impressive specifications on paper, but it boasts good all-around performance for an affordable price tag ($199 MSRP). That makes FSP's platform notable at a time when most ATX 3.0 come with an early adopter tax, with FSP clearly aiming to entice mainstream users who may not currently need an ATX 3.0 PSU but would like to own one in case of future upgrades.

As a true Original Device Manufacturer (ODM) that designs, develops, and sells their own PSUs, this sort of iterative strategy is one we've seen from FSP before, and one that has traditionally served them well. For example, almost nine years went by between our review of the Aurum PT series and the newer Hydro PTM series. As in that case case as well as now with the Hydro Pro G, FSP likes to develop proven designs that they can offer to consumers and downstream OEMs alike for many years to come. All of which means that when FSP does update or overhauls a platform, it's for a very good reason – and typically warrants paying attention to.

We received the FSP Hydro G Pro ATX 3.0 1000W PSU in a striking cardboard box, with an additional cardboard ribbon around it. The box is very sturdy and, on the inside, additional packaging foam slabs and a nylon bag protect the unit from shipping damage. A wealth of information about the unit and its new PCIe 5.0 12WHPWR connector can be found on every side of the box, which is going to be very helpful for brick-and-mortar customers in particular so that they can avoid confusing this PSU with the original (non-ATX 3.0) Hydro G Pro. 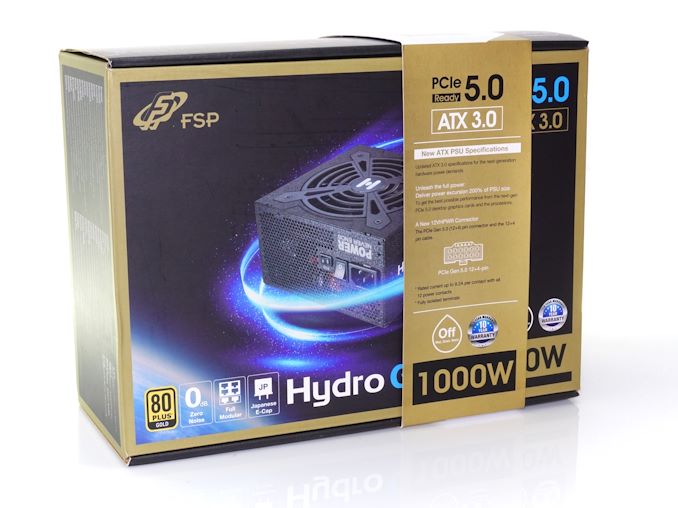 Inside the box we found a bare-bones accessories bundle, a notable choice considering that this is for a flagship-level PSU. The company supplies only a simple AC power cable, four mounting screws, and a basic manual. There are also two sets of side stickers, one green, and one red. The blue set is already glued to the unit. These stickers are permanent and cannot be removed without damaging them. 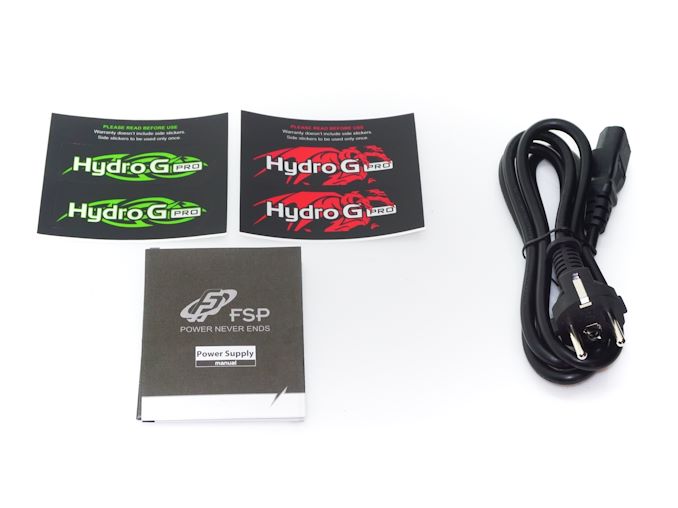 The FSP Hydro G Pro 1000W PSU is a fully modular design, allowing for the removal of every DC power cable, including the 24-pin ATX connector. Nearly all of the cables are black, ribbon-like, with black connectors. The only exception lies with the PCIe 5.0 12WHPWR cable, which also is all-black, but it is a classic sleeved cable instead. 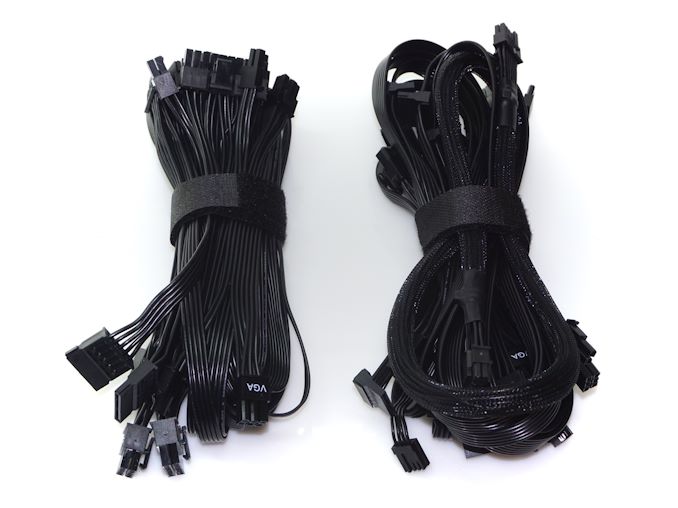 FSP’s marketers have printed on the box that the 12WHPWR cable is rated for up to “9.2 A per contact, with all 12 power contacts”. Unfortunately, that ends up being misleading choice of words, as it implies that all 12 contacts can deliver current to the card. Each of the power contacts of the 16-pin connector is indeed capable of handling 9.2 A, but there are only six voltage and six ground contacts. Which means that the cable has a maximum continuous current delivery capacity of 6 × 9.2 A, which fully conforms with Intel’s design requirements.

The FSP Hydro G Pro ATX 3.0 1000W is rather compact for a 1 kW unit, with a chassis that is just 150 mm deep. It is technically not fully compliant with the ATX standard dimensions, which limit the depth of an ATX PSU to 140 mm, but 150 mm should not pose any problems in any modern ATX case. FSP sprayed the chassis with textured paint, which is aesthetically appealing and practically immune to fingerprints. The fan finger guard is a separate but custom part, with the company logo decorating its center. 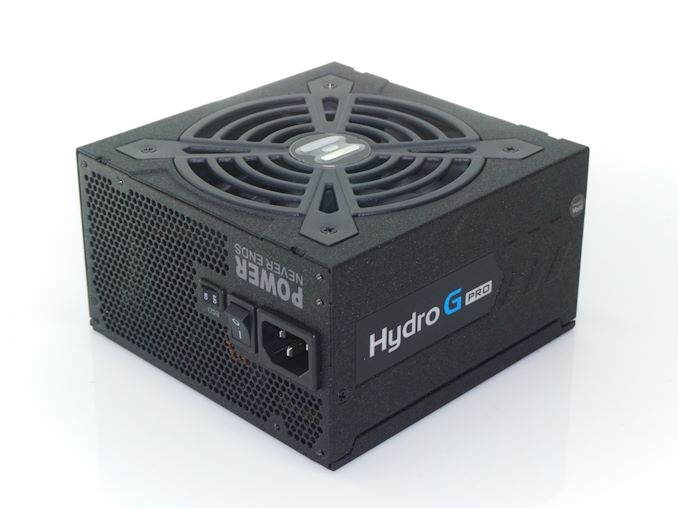 The sticker with the unit’s electrical certifications and specifications covers about half the top side of the PSU. Decorative blue-themed stickers are pre-applied on the sides of the unit, which can be replaced with the red or green stickers that FSP includes in the package. The downside here is that the stickers will be destroyed once removed, making any choice technically permanent. 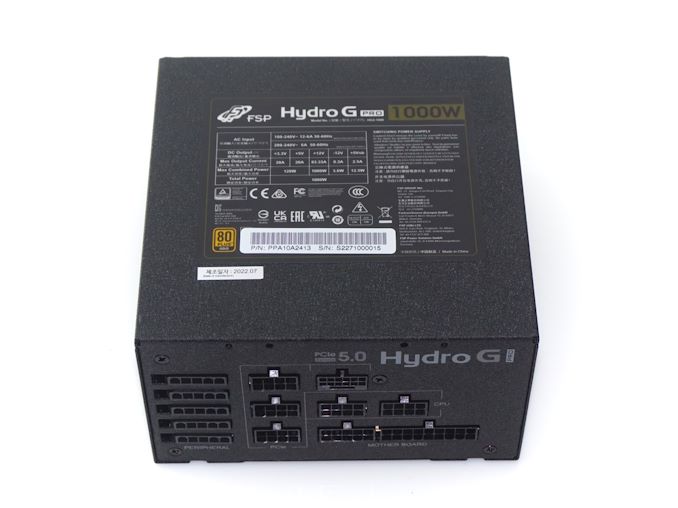 A typical on/off switch can be seen at the rear side of the unit, beside the power connector. Another small switch right next to it controls the “ECO Mode” of the cooling fan. When activated, the cooling fan will shut off while the load is under 300 Watts. The front side of the unit is home to the numerous connectors for the modular cables. A very subtle legend is printed under each group of connectors, sprayed directly onto the chassis. 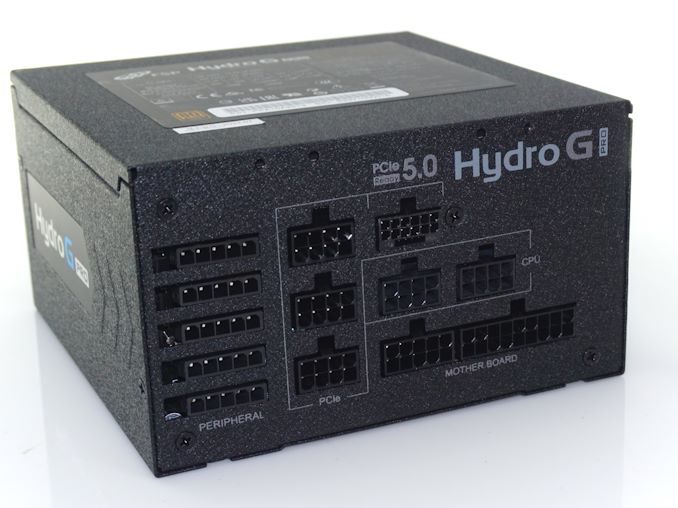 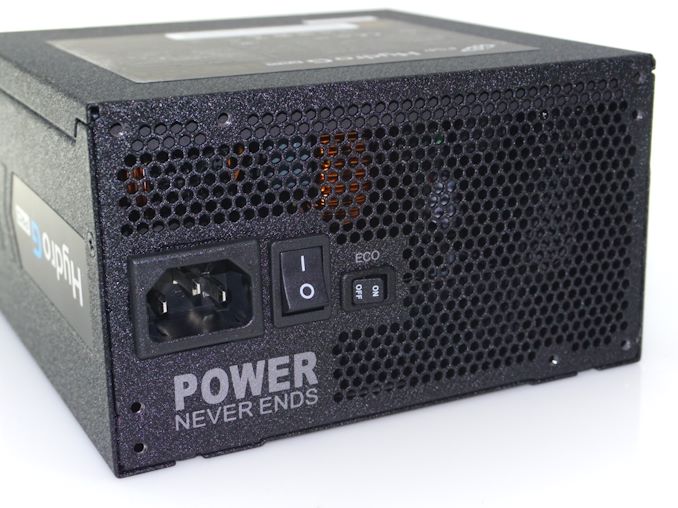 FSP once again entrusted the cooling of their PSU to Protechnic Electric, a brand we usually find taking care of the cooling needs of their PSUs. The MGA12012XF-O25 is a 120 mm fan with a fluid-dynamic bearing (FDB) engine and an extremely high maximum rotational speed of 2700 RPM. 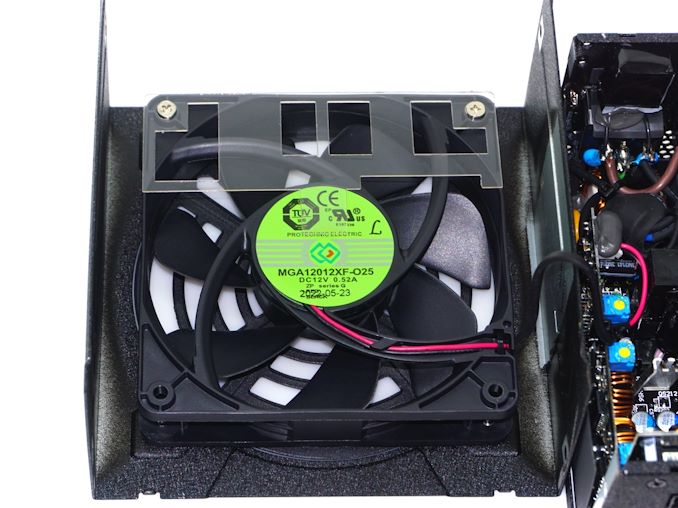 As we mentioned above, there are no hidden ODMs to discover here – FSP is both the designer and the manufacturer of the Hydro G Pro 1000 Watt PSU. A swift look at it reveals that it is based on nowadays common topologies and equipment, with the company clearly aiming for simplicity and reliability. 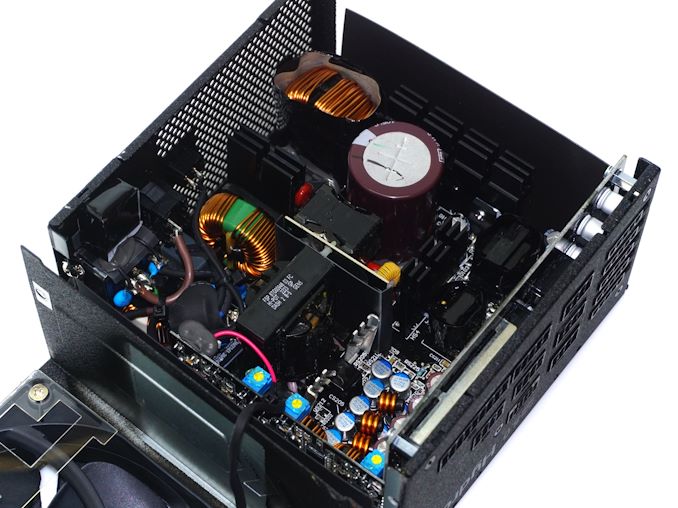 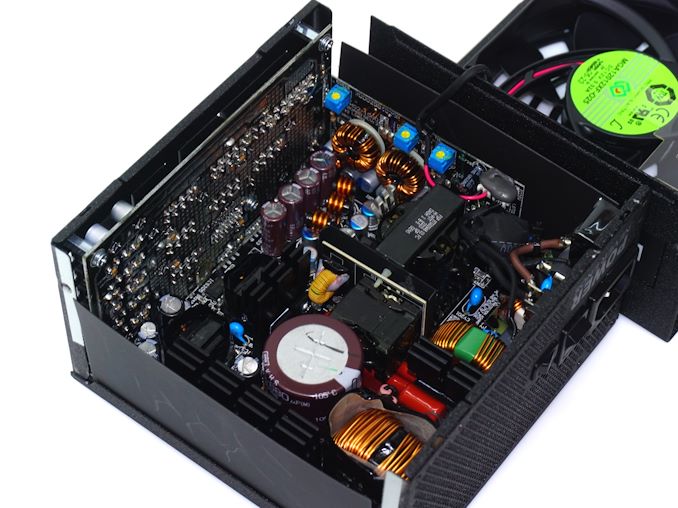 The filtering stage is textbook, with a total of four Y capacitors, two X capacitors, and two filtering inductors leading to a dual input rectifying bridge configuration. Both of the rectifying bridges have their own heatsink sandwiched in between them. The passive APFC components are a large 450V/680μF APFC capacitor by Nippon Chemi-Con and a large filtering coil wrapped inside a protective foil. The active APFC components are on a long heatsink right across the edge of the PCB. 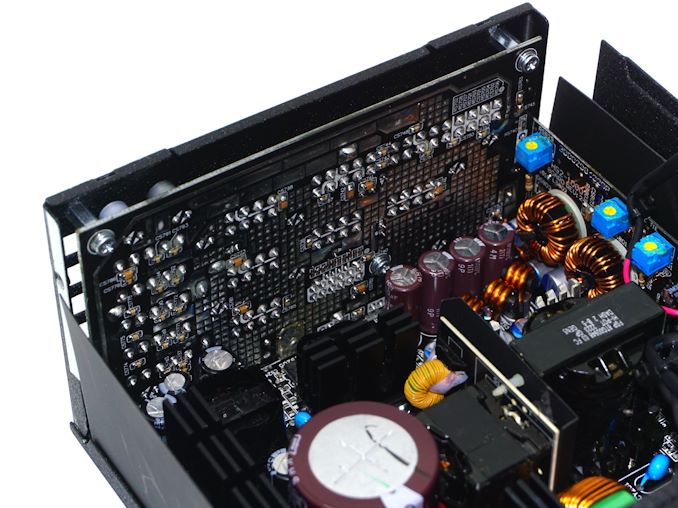 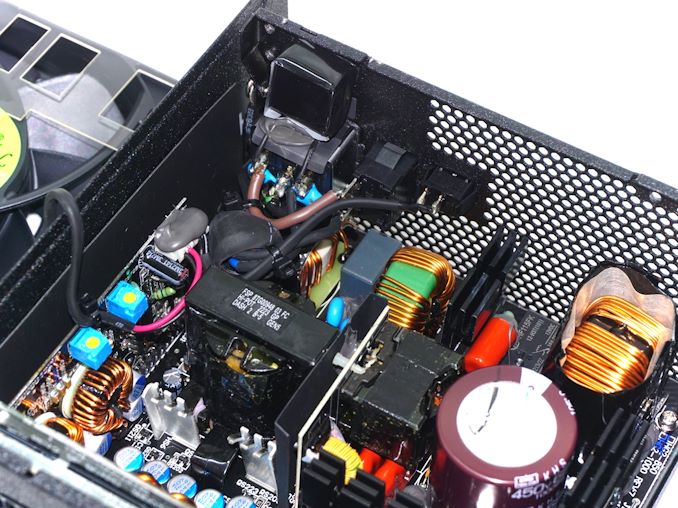 Two transistors form a typical half-bridge inversion topology at the primary side of the unit, while six MOSFETs placed at the underside of the PCB generate the 12V line at the secondary side of the transformer. The 3.3V and 5V lines are being generated via the DC-to-DC conversion circuits. All in all, this is a very typical configuration for an 80Plus Gold certified unit. All of the secondary capacitors, electrolytic and polymer alike, are provided by Nippon Chemi-Con and Rubycon, both Japanese manufacturers. 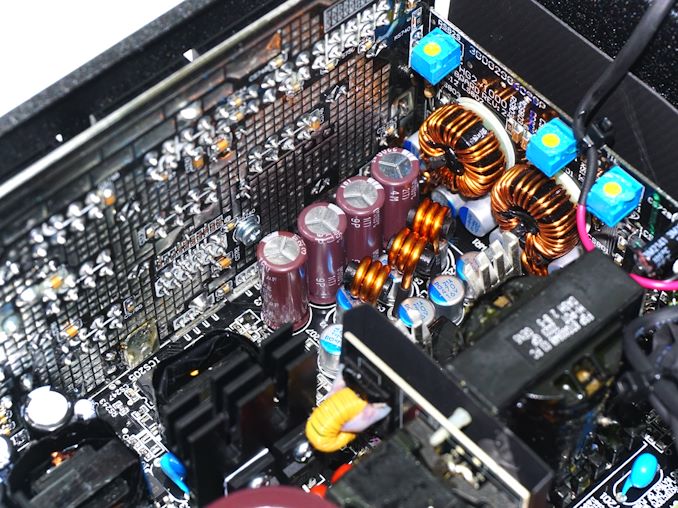 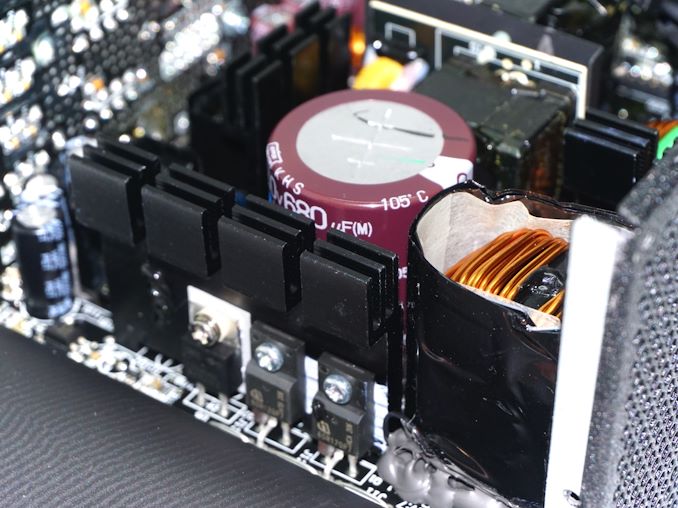