Given that the two configurations use the same ASMedia ASM3264 bridge chip and the same internal SK hynix Gold P31 internal SSD, it is no surprise that the peak power consumption numbers are similar. Across the full workload, the MS12 emerges slightly more power-efficient compared to the HC2-C3. It must also be noted that the MS12 allows the SSD to go to a low-power state after idling for a while. Deep into the idling period, the HC2-C3 continued to draw 2.42W from the host, while the MS12 was drawing only 0.49W.

The SilverStone MS12 and Yottamaster HC2-C3 utilize the same bridge chip, and, as you probably expect, end up delivering similar performance numbers. However, there are some pros and cons to both units. 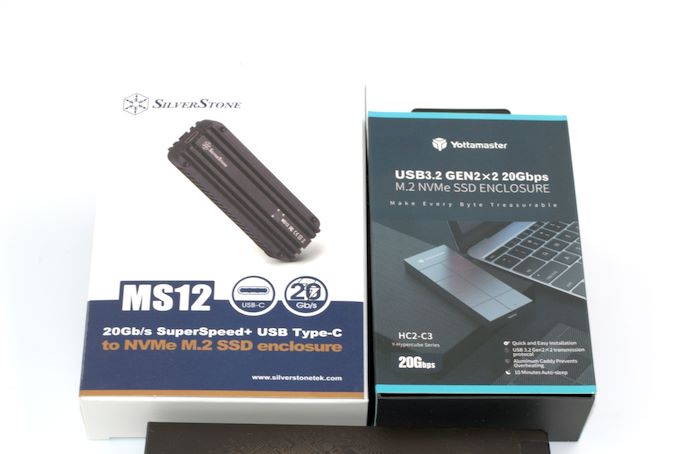 Between the two enclosures, the SilverStone unit is sturdier and has a better thermal solution for real-world workloads. The finned heat-sink structure of the casing ensures more surface area for heat dissipation compared to the HC2-C3's flat casing. The thermal pads are also pre-installed in the MS12, making for a smooth SSD placement process. The downside is that the performance numbers are slightly behind that of the Yottamaster unit. The Yottamaster unit has an issue with idle power management for the internal SSD, making it difficult to recommend for use with battery-operated devices despite the leading performance numbers.

With all of that said, however, current pricing is adding an extra wrinkle to making any recommendations. Put simply, the pricing of storage bridges – particularly from Shenzhen-based vendors such as Yottamaster – tend to follow no rhyme or reason. While the SilverStone MS12 (with a time-tested distribution strategy across different markets) has been steady at USD 70 since its introduction in the North American market, the pricing for the HC2-C3 has fluctuated wildly, ranging from USD 57 in April 2021, to USD 139 in August 2021. At the very least, Yottamaster does have a bundle currently retailing for USD 150, which includes the C5 expansion card we used in last year's USB 3.2 Gen 2x2 review.

Ultimately, in light of the currently inflated stand-alone pricing for the HC2-C3, our nod goes to the SilverStone MS12. If the HC2-C3 were available for a sub-USD 70 price, then there would be more of a fight. But with the lower price, lower power consumption, and some better design decisions made with the chassis itself, the MS12 is the better enclosure in almost every way.