Regular readers of our direct-attached storage reviews might have noticed that we upgrade our DAS testbed approximately every couple of years. It is important to keep the testbeds consistent across reviews of different storage devices so that the effect of the CPU, DRAM bandwidth, etc. remain the same across different runs of the benchmarks on different devices.

Our most recent update to the DAS testbed was in early 2019 - a move to the Hades Canyon NUC triggered by the inconsistent performance of the Alpine Ridge port in our Skylake DAS testbed. This inconsistency started showing up after we attempted a Thunderbolt firmware upgrade to enable eGFX functionality on the machine. Prior to the Skylake-based testbed, we were using a Haswell-based system. We opted against building a fresh DAS testbed with either the TRX40 or Z490 boards, as the imminent arrival of USB4 meant that we could again be forced to do an upgrade. A testbed change not only involves preparing a new machine - it also involves benchmarking older drives again (to the extent possible). We wanted to put this off as much as possible.

The Hades Canyon NUC, without PCIe expansion cards handling capability, was ruled out as a recipient of the Yottamaster C5. The initial plan was to use the Ghost Canyon NUC for this purpose after removing the discrete GPU. As we soon discovered, the PSU of the Ghost Canyon NUC doesn't come with SATA power cables, and an adapter cable wasn't handy. We moved on to our next option, the Skylake-based DAS testbed. 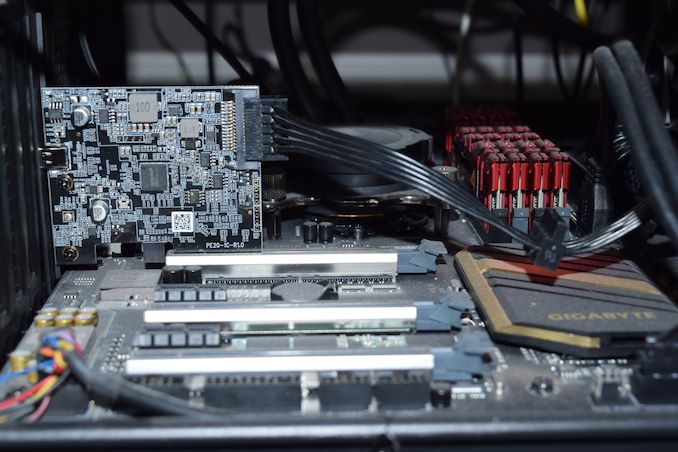 The installation of the Yottamaster C5 in the GIGABYTE Z170X-UD5 TH ATX board was uneventful - no drivers to install, as the ASMedia ASM3242 in the C5 uses Microsoft's XHCI drivers built into Windows 10 (May'20 update). As a first step, we took the SanDisk Extreme Portable SSD v2 (SuperSpeed USB 10Gbps) for which we already had recent benchmark numbers, and processed it with our test suite using the C5's Type-C port. The benchmarks with the ASM3242 host delivered better results than what was obtained with the Alpine Ridge port of our regular testbed - but this was to be expected, given the ASMedia chipsets at either end of the chain. After being satisfied with the shaping up of the updated testbed, we connected the SanDisk Extreme PRO Portable SSD v2 to the C5's port. Unfortunately, the drive kept connecting and disconnecting frequently (YouTube video link for screen capture). Sometimes, it stayed up for long enough to process a couple of iterations of one of the CrystalDiskMark workloads before disappearing (as shown in the screenshot below). 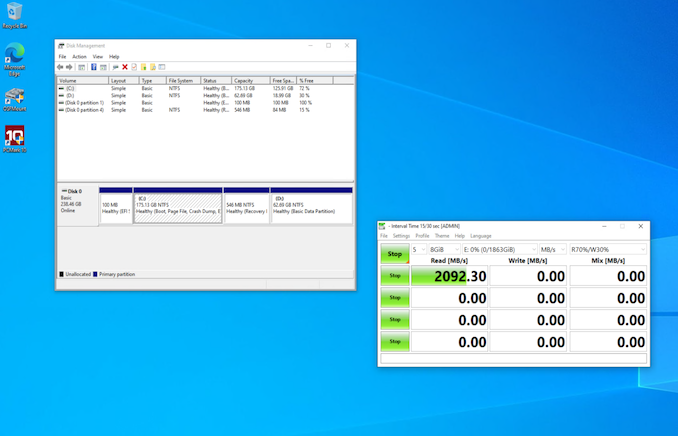 Initially, the suspicion was on the Plugable USBC-TKEY in the middle of the chain (kept in place for power measurement), but the behavior was the same with the direct connection too. The WD_BLACK P50 also exhibited the same problems. Based on the online reviews, this problem doesn't seem to be isolated to the Yottamaster C5 - ASM3242 cards from other vendors also appear to have similar issues.

Ruling out the Skylake-based testbed for the evaluation, we decided to attempt the installation of the card on our Haswell-based testbed. In this system, we no longer had the disconnection issue. Our test suite managed to run to completion on all the drives that we wanted to test. 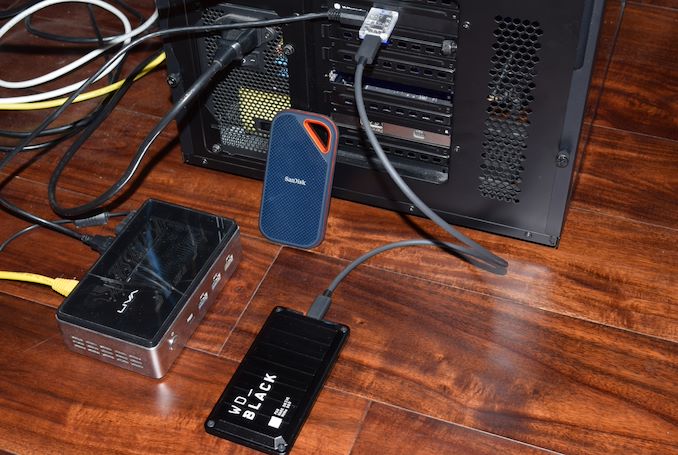 We did observe one hiccup in the set of tests - while processing the CrystalDiskMark 4K random reads and writes with 16 threads and a queue depth of 32, the system completely froze up for a good 30-60s before recovering (the effect can be seen in the CrystalDiskMark power consumption graphs in a later section). Our internal SSDs review editor, Billy, was able to reproduce the same with a Haswell-based system (using Core i7-4790K) at his end while using an Intel USB 3.0 port and a SuperSpeed 10Gbps enclosure using the JMicron JMS583 chipset. The problem was not reproducible with internal drives. Our inference is that the combination of high queue depth and thread count creates way too much driver overhead that the Haswell-based systems find difficult to handle.

As a final resort, we shifted back to the current DAS testbed, the Hades Canyon NUC. Taking the eGFX route, we connected the PowerColor Gaming Station to the Thunderbolt 3 port after removing its internal daughtercard responsible for all of its I/O ports. The PowerColor Gaming Station unofficially supports a SATA drive, which meant that its PSU has a spare SATA power cable. Using this, it was a breeze to get the Yottamaster C5 up and running in the eGPU enclosure. 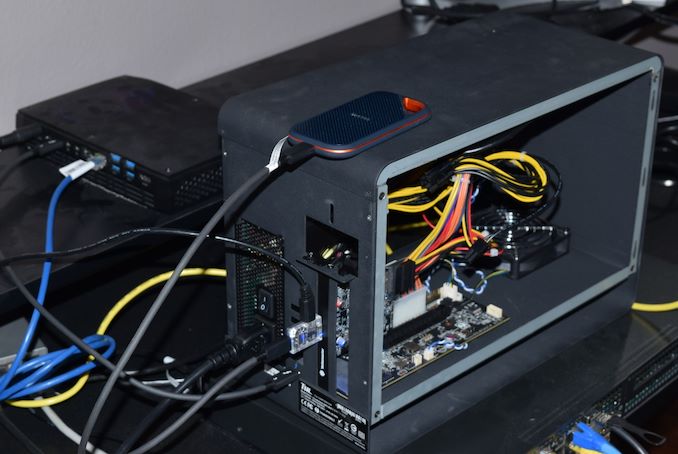 The table above lists all the configurations that were tested, along with notes on the implications of the suffix seen in the graphs in the following sections.