Aside from the core-side microarchitectural aspects of the V1, the new design also features some new system-facing novelties that promise to help vendors integrate the CPU IP better in larger scale implementations. 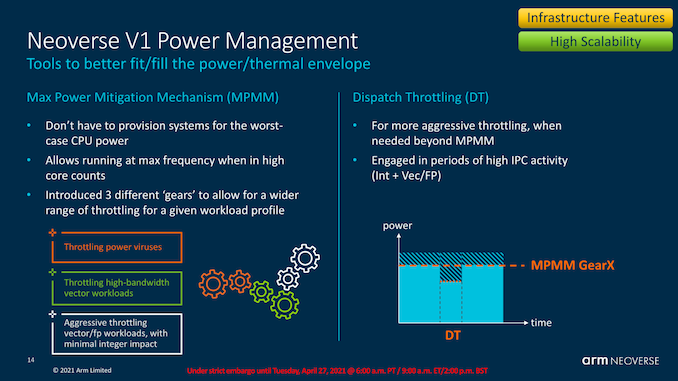 MPAM, or Max Power Mitigation Mechanism is a new fine-grained (to around 100 clock cycles) power management mechanism that promises to help smooth out the power behaviour of the core, and allow vendors’ implementations of the chip’s power delivery mechanisms to be so to say, be built to lesser requirements.

As we’ve seen in our review of the Ampere Altra, instead of fluctuating frequency at maximum TDP like how most x86 CPUs behave right now, the chip rather prefers to stay most of the time at maximum frequency, with the actual power consumption many times landing in at quite below the TDP (maximum allowed power consumption).  A mechanism such as MPAM would allow, if possible, for the system’s average frequency to be higher by throttling the power limited cores to a finer degree. The mechanism to which this can be achieved can also include microarchitectural features such as dispatch throttling where the core slows down the dispatched instructions, smoothing out high power requirements in workloads having high execution periods, particularly important now with the new wider 2x256b SVE pipelines for example. 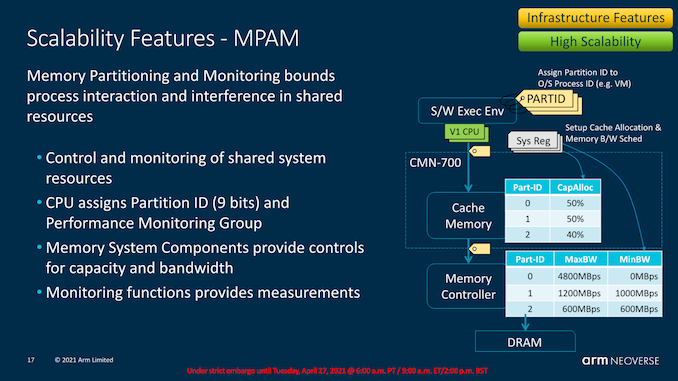 MPAM is a different mechanism helping interactions in larger system implementations. The Memory partitioning and monitoring feature is supposed to help with quality of service and reducing side-effects of noisy neighbours in deployments where multiple workloads, such as multiple VMs or processes, operate on the same system. This naturally requires software-hardware cooperation and implementation, but should be something that is particularly helpful in cloud environments. 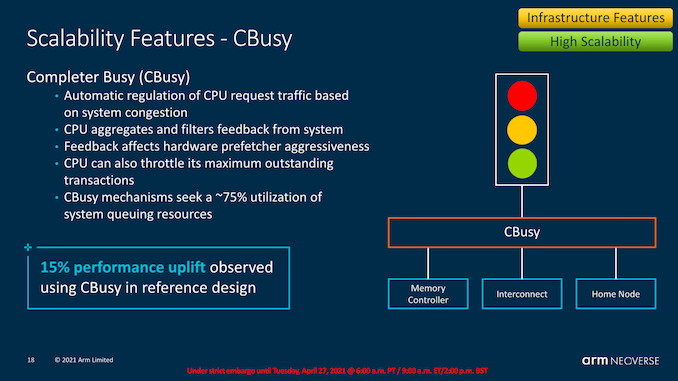 CBusy or Completer Busy is also a new system-side mechanism where the CPU cores interact with the mesh interconnect on a feedback-based basis, where the CPUs can vary their memory prefetcher aggressiveness depending on the overall mesh and system memory load. This ties in with the previously mentioned dynamic prefetcher behaviour where one can have the best of both worlds – better prefetching for more performance per core when the bandwidth is available, and very conservative prefetching when the system is under high load and there’s no room for wasted speculative bandwidth and data transfers.