The second in ASUS's Republic of Gamers B560 series is the ROG Strix B560-F Gaming WIFI which is one offive (at the time of writing) available Alphabet Strix models. The ASUS ROG Strix B560-F Gaming WIFI offers a mixture of premium features commonly found on its Z590 models but keeping in line with the overall premise of the value element of B560. Its design consists of a typical Strix model, with primarily black heatsinks with Strix graffiti-inspired text. There is also an illuminated RGB ROG logo integrated within the rear panel cover. 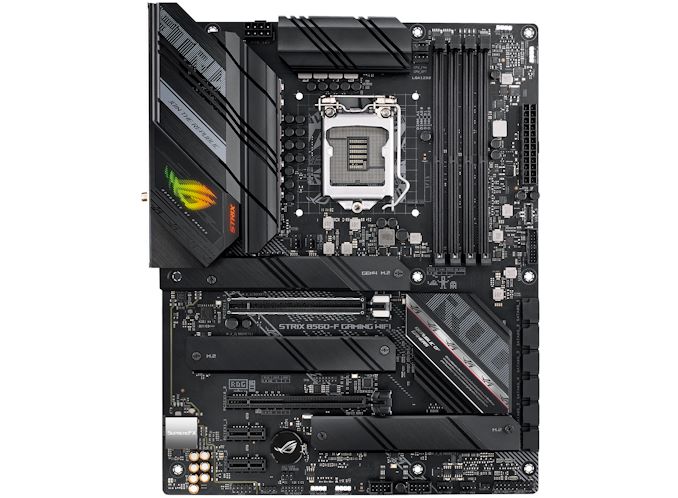 Included in the feature set are two full-length PCIe slots including one PCIe 4.0 x16 (top) and one PCIe 3.0 x4 (bottom), with two PCIe 3.0 x1 slots. Storage on the F model consists of three PCIe M.2 slots with one PCIe 4.0 x4 and two with support for PCIe 3.0 x4 and SATA drives. Along the right-hand side are six SATA ports arranged in a line with support for RAID 0, 1, 5, and 10 arrays. At the time of writing, ASUS hasn't published its QVL memory list, so support is listed as DDR4-3200 in line with Rocket Lake, but we do know that the four available slots will accommodate up to 128 GB of memory.

On the rear panel is plenty of connectivity including one USB 3.2 G2x2 Type-C, two USB 3.2 G2 Type-A, two USB 3.2 G1 Type-A, three USB 2.0 ports, as well as one of ASUS's latest Type-C audio ports. For users of integrated graphics, ASUS includes one HDMI 2.0 and one DisplayPort 1.4 video output, as well as five 3.5 mm audio jacks and S/PDIF optical output driven by a ROG Supreme FX S1220A HD audio codec. On the networking side of things, there's an Intel pairing including an I225-V 2.5 GbE controller and an AX200 Wi-Fi 6 CNVi model. Finishing off the rear panel is a BIOS Flashback button.