One of MSI's most interesting series over the last few years has been the Tomahawk. Representing its more modest gaming-focused MAG (arsenal gaming) series, it's been proven to good effect with a mixture of decent features, usually at a very competitive price point. The MSI MAG B560 Tomahawk Wi-Fi looks to further solidify this for Intel's more budget-focused LGA1200 B560 series. It includes a black PCB, with gunmetal grey heatsinks, including militaristic themed lettering we've come to expect from a Tomahawk; its namesake is a popular missile in the US military's arsenal. 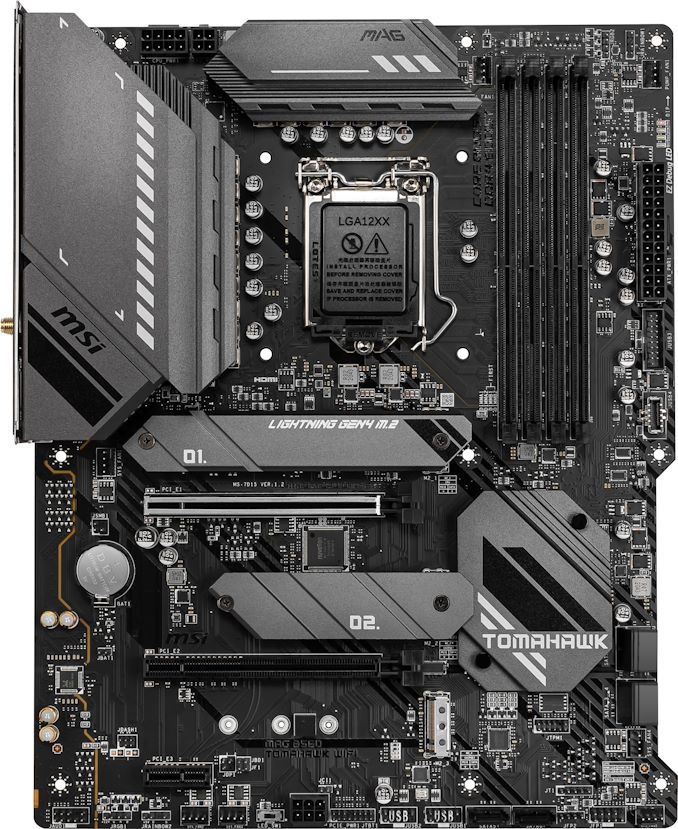 Looking towards the B560 Tomahawk Wi-Fi's feature set, it includes two full-length PCIe slots, with the top slot operating at PCIe 4.0 x16 and the second slot electronically locked to PCIe 3.0 x4. MSI also includes one PCIe 3.0 x1 slot. For storage, there's a trifecta of M.2 slots, with one supporting PCIe 4.0 x4 drives, and two with support for PCIe 3.0 x4 and SATA. There are six SATA ports, two with straight-angled and four with right-angled connectors, all including support for RAID 0, 1, 5, and 10 arrays. In the top right-hand corner are four memory slots which include support for up to DDR4-5000 and a combined capacity of up to 128 GB.

On the rear panel is a single USB 3.2 G2x2 Type-C, four USB 3.2 G1 Type-A, and four USB 2.0 ports. MSI is using an unspecified Realtek HD audio codec that powers five 3.5 mm and S/PDIF optical output, while its networking capabilities come from an Intel AX210 Wi-Fi 6E CNVi, and a Realtek RTL8125B 2.5 GbE controller. Finishing off the rear panel are a pair of video outputs including one HDMI 2.0 and DisplayPort 1.4 output.