Moving down from the Z590 Taichi is the ASRock Z590 PG Velocita. The PG stands for Phantom Gaming, ASRock's gaming-focused range, with aggressive yet stylish aesthetics. We reviewed the previous ASRock Z490 PG Velocita last year, and for 2021, ASRock has updated the design for Z590. This includes a futuristic RGB enabled chipset heatsink, with other RGB included in the rear panel cover. 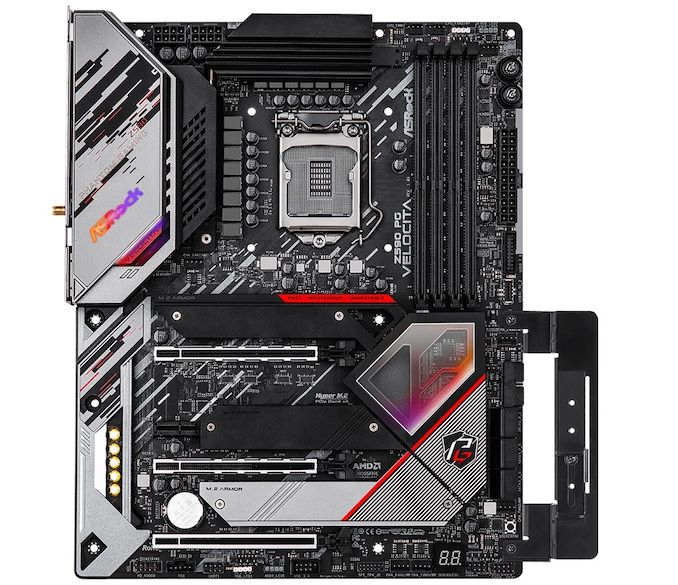 The ASRock Z590 PG Velocita includes three full-length PCIe slots with ASRock Steel Armor, with the top two slots operating at PCIe 4.0 x16, and x8/x8, the third operating at PCIe 3.0 x4, with a single PCIe 3.0 x1 slot. There are four memory slots with support for DDR4-4800, with a maximum combined total of 128 GB. For storage, ASRock includes one PCIe 4.0 x4 M.2 slot, with two PCIe 3.0 x4 M.2/SATA slots, with six SATA ports. Located in the top-right hand corner is an onboard power and reset button pairing, while a two-digit LED debugger can be found at the bottom right.

On the rear panel is one USB 3.2 G2 Type-C, one USB 3.2 G2 Type-A, and six USB 3.2 G1 Type-A ports, with a DisplayPort 1.4 and HDMI video output pairing for users looking to use Intel's integrated graphics. Networking is provided by two Ethernet controllers, including a Killer E3100 2.5 GbE and Intel Gigabit pairing. Wireless is provided by a new Killer AX1675 Wi-Fi 6E CNVi with support for BT 5.2 devices. The onboard audio is powered by a Realtek ALC1220 HD audio codec and uses Nahamic audio control.