We start with ASRock's models by opening up our overview of each Z590 motherboard in alphabetical order (by the vendor). ASRock uses the latest Intel Killer Wi-Fi 6E CNVi across its models. There is also an an ASRock Graphics Card Holder, designed to support bulky cards.

Many years ago, ASRock entered into a sponsorship deal with a successful gamer to produce its gaming models. What they got was mostly a name to sell the hardware, and since then ASRock's most notable motherboard line is now the Taichi. Originally unveiled for Intel's Z270 chipset, it's a regular mainstay with its solid blend of cogwheel inspired aesthetics and premium features. The ASRock Z590 Taichi is ATX and looks to be the brand's flagship model at present. 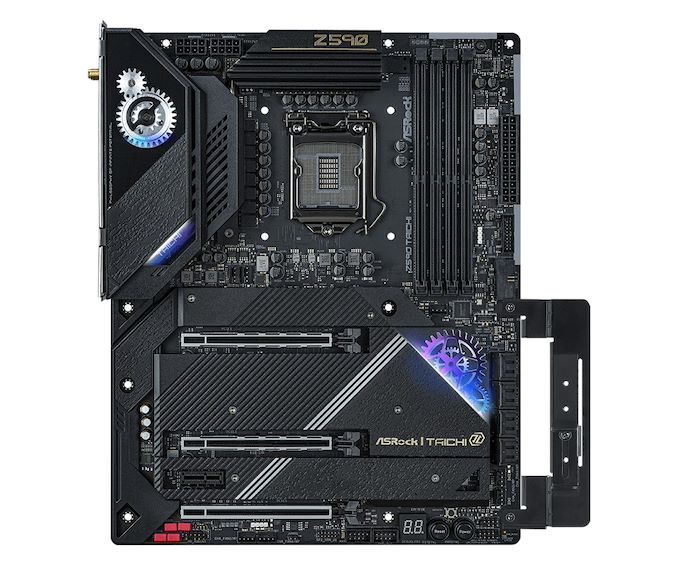 For 2021, the ASRock Z590 Taichi has opted for a more clean-cut all-black aesthetic, with RGB LED lighting elements within the rear panel, the chipset heatsink, and the underside of the board at the right-hand side. ASRock is also advertising an 8-layer PCB with a 14-phase power delivery with 90 A power stages. The Z590 Taichi includes three full-length slots, with the top slot operating at PCIe 4.0 x16, two of them running at x8/x8, and a single small PCIe 3.0 x1 slot. Other features include triple M.2 slots, with one operating at PCIe 4.0 x4 from the CPU and two with PCIe 3.0 x4 from the chipset. These final two have SATA support, as well as the eight traditional SATA ports. It also includes four memory slots with support for DDR4-5000 memory, with a maximum capacity of 128 GB.

The rear panel includes dual Thunderbolt/USB 4.0 Type-C ports, with two USB 3.2 G2 Type-A and four USB 3.2 G1 Type-A ports. It includes dual Ethernet, one driven by a Killer E3100G 2.5 G NIC and the other by an undisclosed Intel Gigabit controller. Wireless connectivity comes from an undisclosed Wi-Fi 6E interface, likely the Intel AX210, which includes support for BT 5.2. It uses a Realtek ALC1220 HD audio codec for onboard audio, with an assisting ESS Sabre ES9128 DAC for uprated audio capability. There is also a single HDMI video output.