Another model from ASUS's ROG Maximus line-up is the highly favorable Hero. The ROG Maximus XIII Hero offers Wi-Fi 6E, with dual 2.5 GbE and four PCIe M.2 slots. It uses a slightly different aesthetic compared with the previous Z490 Hero, with RGB LED lighting built into the rear panel cover and chipset heatsink. Still, ASUS's illustration leaves the question open whether or not the power delivery heatsink has them integrated too, which seems unlikely. The new Hero uses an ATX PCB, with a 14+2 power delivery with 90 A teamed power stages. Powering the CPU is a pair of 12 V ATX CPU power inputs. 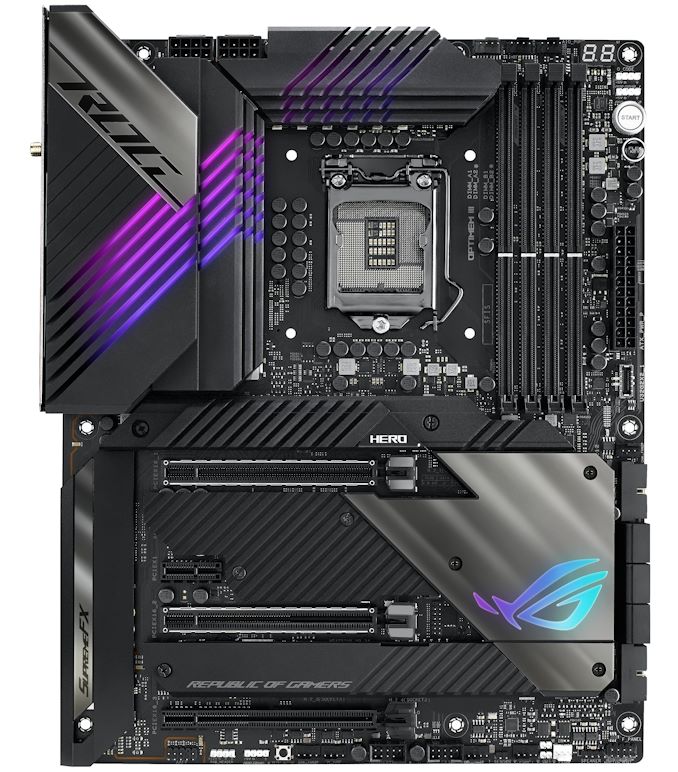 The ASUS ROG Maximus XIII Hero includes a nice black and dark gray contrasting design, with three full-length PCIe slots. The top two operate at PCIe 4.0 x16 and x8/x8, while the bottom full-length slot is locked to PCIe 3.0 x4, and there is also one PCIe 3.0 x1 slot. The Hero includes six SATA ports with support for RAID 0, 1, 5, and 10 arrays, with four PCIe M.2 slots. Two of the M.2 slots operate at PCIe 4.0 x4, while the other two can support PCIe 3.0 x4 and SATA drives. In the top right-hand corner are four memory slots with support for up DDR4-5333, with a combined capacity of 128 GB. In the top right-hand corner of the board is a two-digit LED debugger, with a power on and rest switch pairing just below it.

On the rear panel is two Thunderbolt 4 Type-C, with six USB 3.2 G2 Type-A and two USB 2.0 ports. ASUS includes two RJ45 ports powered by two Intel I225-V 2.5 GbE controllers, with an Intel AX210 Wi-Fi 6E CNVi, which also includes support for BT 5.2 devices.  For users planning to use Intel's integrated graphics, ASUS includes one HDMI video output. Regarding audio, ASUS is using a SupremeFX ALC404082 HD audio codec, with an ESS Sabre9018Q2C DAC. Finishing off the rear panel is a clear CMOS button and a BIOS Flashback button with a highlighted USB 2.0 port, which users can use to flash the board's firmware.

Typically bridging the gap between the ROG Maximus Extreme and Formula models to the Strix series, ASUS has set a price of $500. While this does seem on the high side of Z590 pricing, which we already know, ASUS does include a stacked rear panel including dual Thunderbolt 4 Type-C, dual 2.5 GbE, Wi-Fi 6E, as well as six USB 3.2 G2 Type-A.