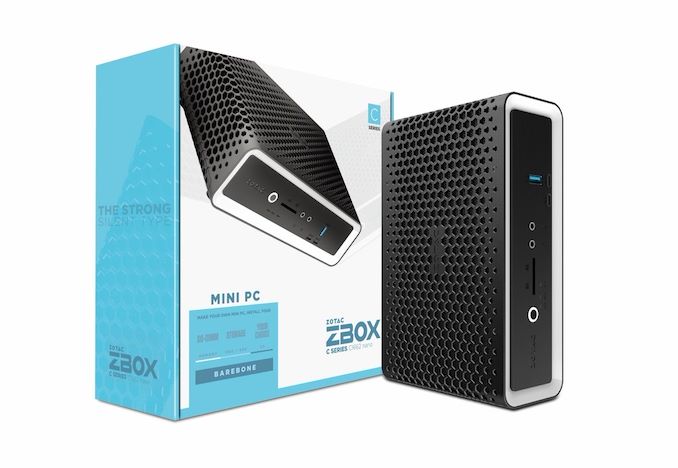 Zotac is one of the major players in the SFF PC space, having launched ultra-compact form-factor machines even before NUCs took off. The growth in that segment has broadened the available market for their mini-PCs, allowing them to experiment with a wide variety of models for different use-cases.

Zotac markets their passively-cooled SFF under the 'C-series' tag. These 'nano' units used to adopt a NUC form-factor (100mm x 100mm) with similar chassis dimensions, which provided performance and thermal efficiency commensurate with their size. Starting with Intel's Kaby Lake-Refresh series, the company started adopting a larger form factor and added some platform features. Having reviewed the Core i7-8550U-based Zotac ZBOX CI660 nano in that generation in early 2019, we concluded that it was a promising HTPC platform, albeit with a few loose ends.

Comet Lake-U (CML-U) made it quite simple for vendors to take their KBL-R-U systems and perform a quick turn-around by just replacing the internal processor with the newer one without having to tinker too much with the board design. Zotac has done exactly that in the Zotac CI662 nano that we are looking at today.

Zotac introduced their line-up of passively cooled mini-PCs back in 2014, and has been continuously iterating on them over several generations of products from both Intel and AMD. Having realized the limitations of what the form-factor could achieve in the ZBOX CI523 nano (where the thermal design could sustain the rated TDP of the Skylake-U processor for only 10 minutes before throttling), Zotac went back to the drawing board and came up with a fully re-imagined design in the ZBOX CI660 nano. With a slightly larger footprint, the CI660 nano was able to handle a 25W cTDP-up for the integrated KBL-R U-series SiP before settling down to a sustained 15W package power consumption under continuous stress. Our main complaint about the CI660 nano was that it wasn't entirely noiseless due to coil whine (and some noises that appeared to be resulting from the heat-sink fins responding to variations in thermal load). That apart, the CI660 nano completely resolved the issues seen in the CI523 nano. This has prompted Zotac to release a CML-U version with the same chassis design and almost the same internals in the ZBOX CI662 nano.

Zotac's passively cooled CML-U series (the ZBOX CI6x2 nano) has three members - the CI622 nano comes with a Core i3-10110U processor, the CI642 nano sports a Core i5-10210U, and the flagship CI662 nano that we are reviewing today based on the Core i7-10510U. The specifications in terms of I/Os and internals of the three members are otherwise the same. 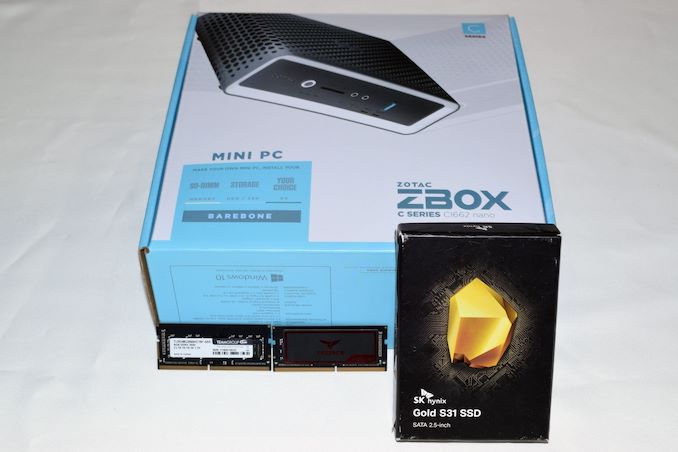 Zotac supplied us with a barebones version of the CI662 nano, and we opted to complete the build with a SK hynix Gold S31 1TB 2.5" SSD and a TeamGroup-SD4-2666 2x 8GB DDR4 SODIMM kit. After completing the review, we realized that the SODIMMs had been operating at 2400 MHz (the 2666 Mhz was a XMP profile) - however, given that we are looking at a low-power fanless PC using a U-series processor, we opted against repeating the benchmarks with a SODIMM kit running at 2666 MHz (Zotac indicates DDR4-2666/2400 as supported configurations in the product page for the CI662 nano). The specifications of our review configuration are summarized in the table below.

The Zotac ZBOX CI662 nano kit doesn't come with any pre-installed OS, but does come with a read-only USB key containing the drivers. In any case, we ended up installing the latest drivers downloaded off Zotac's product support page. In addition to the main unit, the other components of the package include a 65 W (19V @ 3.42A) adapter, a US power cord, a VESA mount (along with the necessary screws), a single 2.4 GHz / 5 GHz antenna for the Wi-Fi feature, user's manual and a quick-start guide. 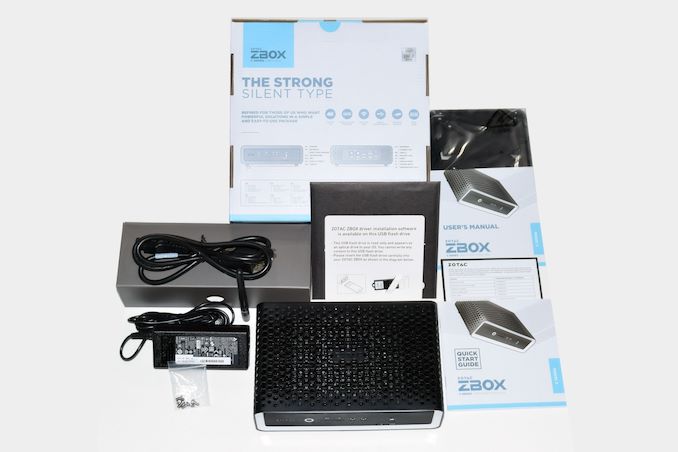 The external hardware appearance and build quality of the system, as well as the I/Os are essentially the same as the CI660 nano we looked at in 2019. The differentiating aspects (compared to other mini-PCs) continue to be the full-sized SDXC card slot and dual RJ-45 LAN ports. The honeycomb design of the chassis with liberal perforations allows for the heat drawn away by the heat sink to be convectively dissipated.

The rubber feet on the underside of the chassis can be removed without the use of a screwdriver (Zotac touts tool-less installation as a plus point for the system). Opening up the underside allows for the installation of a 2.5" SATA drie and DDR4 SODIMMs. The base itself has thermal pads mounted for the RAM sticks as well as the SSD. 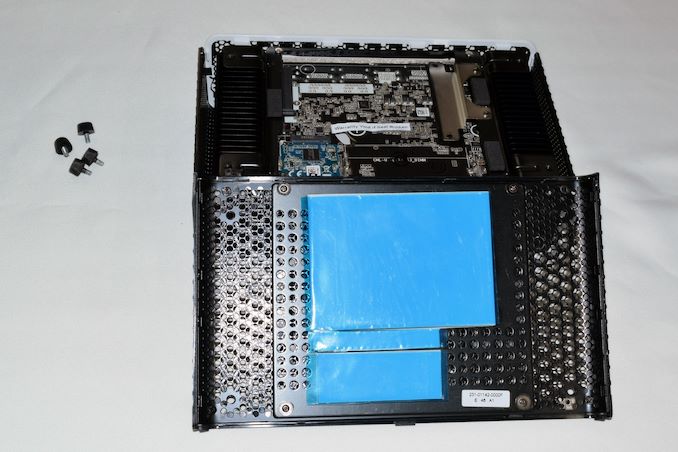 The plastic film over the thermal pads need to be removed prior to finalizing the installation of components. The ASMedia ASM2142 daughterboard that enables the two USB 3.1 Gen 2 Type-C ports can also be seen adjoining the SODIMM slots.

Zotac has a functional GUI-based BIOS interface. The gallery below brings out the various features in the BIOS.

The main screen provides system information at a glance. The OC section allows for enabling / disabling cores, activation of turbo modes and C-states, as well as controlling the Intel SpeedStep dynamic frequency scaling option. By default, the system makes beeping noises when starting up or rebooting - this can be turned off in the 'Features' section of the BIOS. Advanced options such as SGX (Software Guard Extensions) can also be controlled from here. The 'PC Health' section gives a view of the temperature and voltages in the system. ACPI settings are handled in the 'Power' section. The 'Boot' section allows configuration of boot order, selection of UEFI or legacy mode for the OS, fast boot control, secure boot configuration, etc. Single-time boot overriding is also possible.

Intel's Comet Lake-U processor has a wide variety of IO configurations, and we start with the configuration used on the ZBOX CI662 nano board by Zotac. 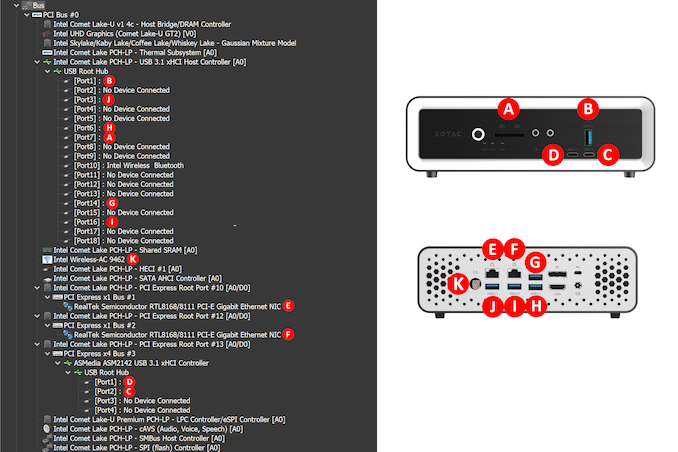 The SDXC card reader is enabled by a Realtek USB card reader controller. The two USB 3.2 Gen 2 (10Gbps) ports in the front are enabled by the ASMedia ASM2142 controller connecting to the built-in PCH through a PCIe 3.0 x4 link. The two Gigabit Ethernet controllers also take up a single PCIe 3.0 lane each. The Wireless-AC 9462 WLAN controller talks to the CML-U SiP using CNVi, while using one of the USB ports for Bluetooth functionality. The four Type-A ports in the rear are all USB 3.2 Gen 2 (10Gbps) directly from the built-in PCH. The single USB 3.2 Gen 1 Type-A port (marked helpfully by Zotac as USB 3.0 to differentiate from the USB 3.1 tag on the other USB ports) is also behind the same root hub as the other USB ports off the built-in PCH.

In the table below, we have an overview of the various systems that we are comparing the Zotac ZBOX CI662 nano against. Note that they may not belong to the same market segment. The relevant configuration details of the machines are provided so that readers have an understanding of why some benchmark numbers are skewed for or against the Zotac ZBOX CI662 nano when we come to those sections.

All of the above systems other than the ECS LIVA Z3 Plus and the Frost Canyon NUC are passively cooled. We include those two actively-cooled systems to get an idea of the performance of the CI662 nano against other Comet Lake-U mini-PCs. LIVA Z3 Plus Out of these systems. In the remainder of this review, we will first look at BAPCo's SYSmark 25, followed by various UL benchmarks and miscellaneous workloads. We also present some storage and networking performance numbers. A detailed look at the HTPC credentials of the system is followed by testing of the power consumption and thermal solution.