Single-threaded performance of the new M1 is certainly one of its key aspects, where the new Firestorm cores definitely punch far above their power class. We had hinted in our preview A14 analysis article that the M1 may well be ending up as not only the top-performing low-power mobile CPU out there, but actually end up as the top-performing absolute performance amongst all CPUs in the market. The A14 fell short of that designation, but the M1 is an even faster implementation of the new Firestorm cores.

It’s to be noted that we’re comparing the M1 to the absolute best desktop and laptop platforms on the market right now, solely looking at absolute best single-threaded performance. 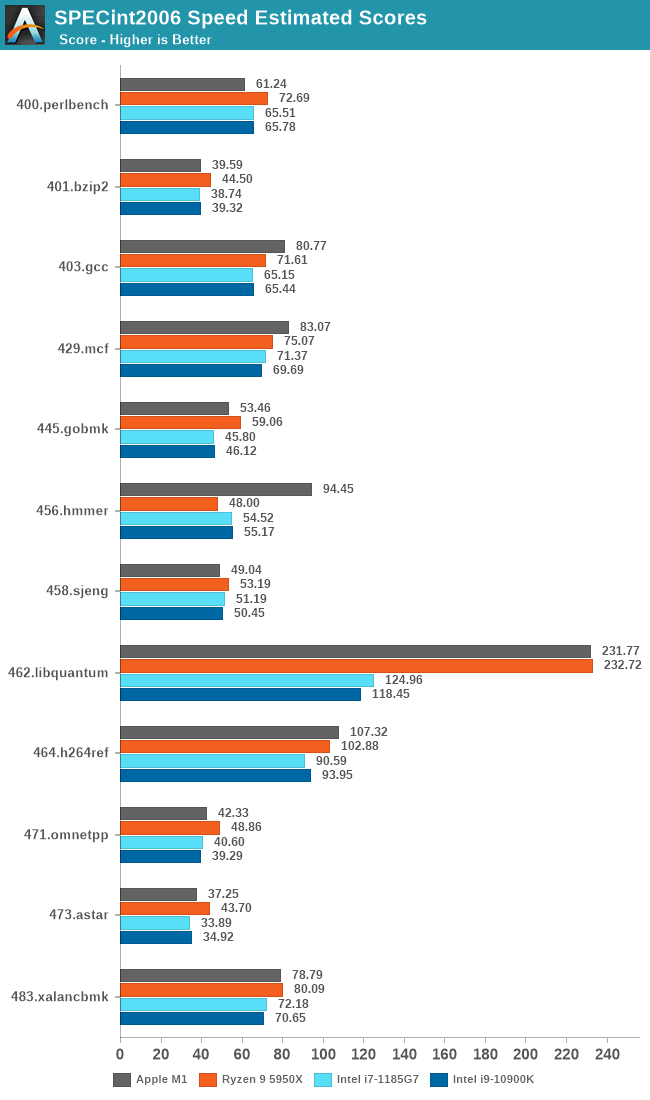 In SPECint2006, we’re now seeing the M1 close the gap to AMD’s Zen3, beating it in several workloads now, which increasing the gap to Intel’s new Tiger Lake design as well as their top-performing desktop CPU, which the M1 now beats in the majority of workloads.

Since our A14 results, we’ve been able to track down Apple’s compiler setting which increases the 456.hmmer by such a dramatic amount – Apple defaults the “-mllvm -enable-loop-distribute=true” in their newest compiler toolchain whilst it needs to be enabled on third-party LLVM compilers. A 5950X with the flag enabled increases its score to 91.64, but also while seeing some regressions in other tests. We haven’t had time to re-test further platforms.

The M1’s performance boost in 462.libquantum is due to the increased L2 cache, as well as the doubled memory bandwidth of the system, something that this workload is very hungry of. 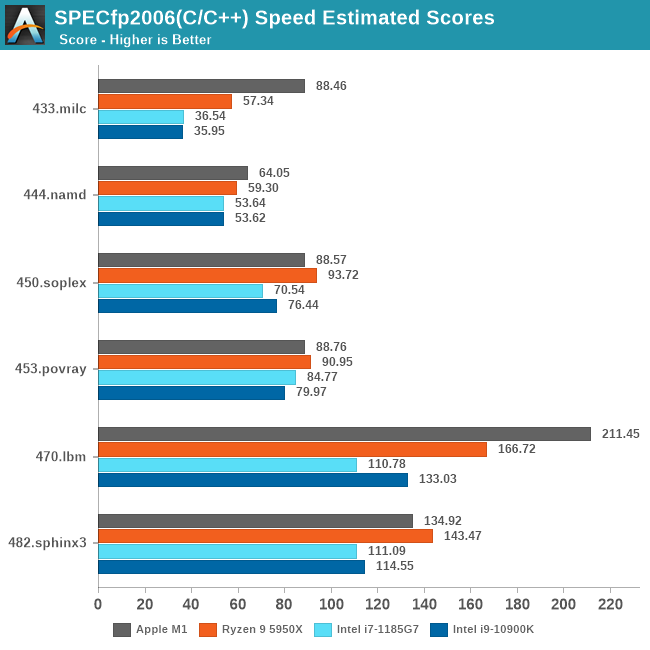 In the fp2006 workloads, we’re seeing the M1 post very large performance boosts relative to the A14, meaning that it now is able to claim the best performance out of all CPUs being compared here. 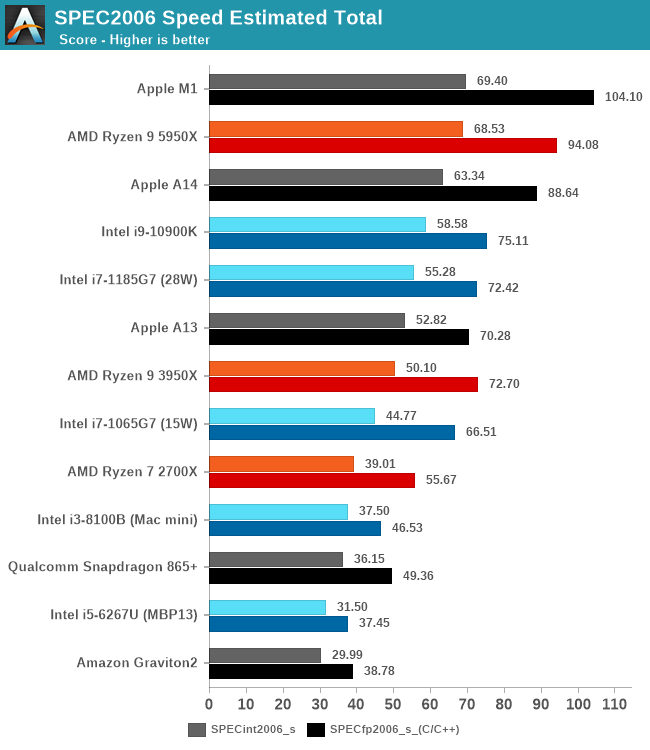 In the overall score, the M1 increases the scores by 9.5% and 17% over the A14. In the integer score, the M1 takes the lead here, although if we were to account for the 456.hmmer discrepancy it would still favour the Zen3-based 5950X. In the floating-point score however, the Apple M1 now takes a large lead ahead, making it the best performing CPU core.

We’ve had a lot arguments about whether 2006 is relevant or not in today’s landscape. We have practical reasons for not yet running SPEC2017 on mobile devices, but given that the new Apple Silicon M1 runs on macOS, these concerns are not valid, thus enabling us to also run the more modern benchmark suite.

It’s to be noted that currently we do not have a functional Fortran compiler on Apple Silicon macOS systems, thus we have to skip several workloads in the 2017 suite, which is why they’re missing from the graphs. We’re concentrating on the remaining C/C++ workloads. 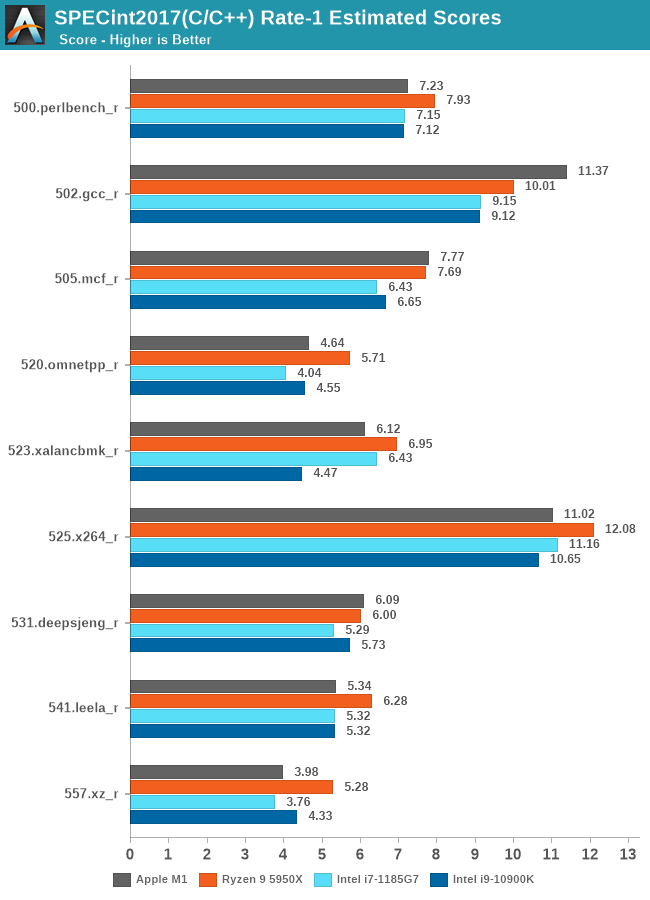 Apple’s performance is extremely balanced across the board, but what stands out is the excellent 502.gcc_r performance where it takes a considerable leap ahead of the competition, meaning that the new Apple core does extremely well on very complex code and code compiling. 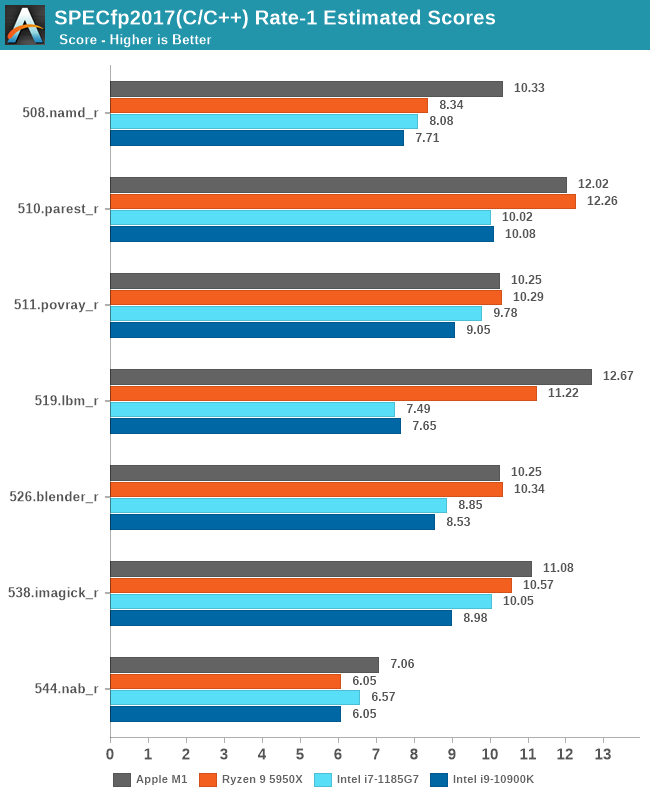 In SPECfp2017, we’re seeing something quite drastic in terms of the scores. The M1 here at worst is a hair-width’s behind AMD’s Zen3, and at best is posting the best absolute performance of any CPU in the market. These are incredible scores. 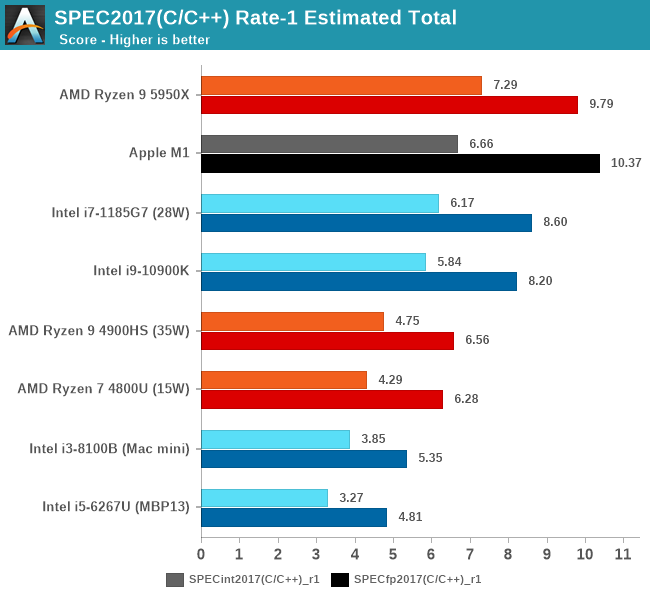 In the overall new SPEC2017 int and fp charts, the Apple Silicon M1 falls behind AMD’s Zen3 in the integer performance, however takes an undisputable lead in the floating-point suite.

Compared to the Intel contemporary designs, the Apple M1 is able to showcase a performance leap ahead of the best the company has to offer, with again a considerable strength in the FP score.

While AMD’s Zen3 still holds the leads in several workloads, we need to remind ourselves that this comes at a great cost in power consumption in the +49W range while the Apple M1 here is using 7-8W total device active power.