Our current SSD test suite is almost completely automated. There are only about a dozen points where manual intervention is required to go from plugging in the drive to having a directory full of graphs ready to be analyzed and uploaded for the review. This helps ensure the tests are highly repeatable, and makes it easier to run a drive through the 24+ hours of testing without losing too much sleep. But things can still occasionally go wrong, and that's what I assumed had happened when I first looked at the test results for the SK hynix Gold P31. The power efficiency scores were way out of the normal range for high-end NVMe drives, and I worried that something was amiss with our very fancy and expensive Quarch HD Programmable Power Module (PPM). 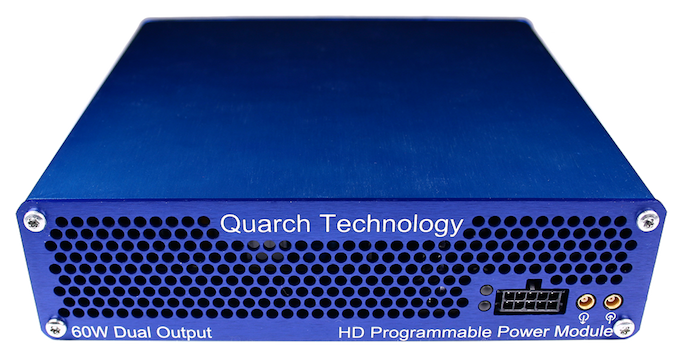 After completing the initial round of testing for the P31, I took several steps to validate the surprising results. First, checking that the PPM wasn't reporting any error codes, and that the graphs were generated from the right data (rather than something like plotting measurements from the 12V supply rail for a 3.3V-only M.2 drive). Then, verifying that the PPM still produced reasonable results for a drive we've previously tested, because we've been using this instrument since April 2019 without any recalibration. I put the Samsung 970 EVO Plus 1TB back on the testbed and re-ran some idle and load power measurements, which produced virtually identical results to our original measurements—confirming that the PPM is still accurately reporting instantaneous power draw.

At this point, it was looking pretty certain that the record-setting efficiency scores from the Gold P31 were genuine, but there were still a few semi-plausible failure modes that could have affected at least some of the tests. For example, on the ATSB tests we report the total Watt-hours of energy used by the drive over the course of the test. If the power log was truncated before the test finished, that could quite easily lead to a much lower total energy usage number—but the power log for The Destroyer contained a normal 7h20m of data (and most of our scripts to process the logs and generate graphs try to detect a truncated log).

To make sure there wasn't anything really strange going on behind the scenes, I re-ran all of the Linux-based synthetic benchmarks with the Quarch Power Studio application open and graphing the power measurements in realtime:

Ignoring the labels on the vertical axis, this all looks as expected. The different phases of the tests are very distinct, with the drive dropping down to reasonable idle power levels between phases, and load power steadily increasing with queue depth. The tests that involve writing data show that the drive's power consumption jumps up after the host system is finished writing, when the SSD flushes the SLC cache in the background. (Our current synthetic tests don't directly measure this phenomenon, but it's typical behavior.) But even so, the largest spikes visible at this scale (samples averaged into 131ms chunks) only hit 4W. It was at this point that I started pressing SK hynix for more details about the controller and NAND used in the P31, to see how they pulled off such impressive efficiency:

The power management feature set of the SK hynix Gold P31 is fairly typical. The warning and critical temperature thresholds are only a degree apart, but realistically, this SSD isn't getting anywhere near those temperatures without a lot of outside assistance. The power state transition times claimed by the P31 are pretty quick.

We report three idle power measurements. Active idle is representative of a typical desktop, where none of the advanced PCIe link power saving features are enabled and the drive is immediately ready to process new commands. Our Desktop Idle number represents what can usually be expected from a desktop system that is configured to enable SATA link power management, PCIe ASPM and NVMe APST, but where the lowest PCIe L1.2 link power states are not available. The Laptop Idle number represents the maximum power savings possible with all the NVMe and PCIe power management features in use—usually the default for a battery-powered system but rarely achievable on a desktop even after changing BIOS and OS settings. Since we don't have a way to enable SATA DevSleep on any of our testbeds, SATA drives are omitted from the Laptop Idle charts.

Note: We recently upgraded our power measurement equipment and switched to measuring idle power on our Coffee Lake desktop, our first SSD testbed to have fully-functional PCIe power management. The below measurements are all new, and are not a perfect match for the older measurements in our previous reviews and the Bench database.

The SK hynix Gold P31 has fairly low active idle power consumption: even with PCIe link power management disabled, it doesn't take much to keep this controller awake. The intermediate idle power level that would be typical for many desktop systems is unimpressive, but 87mW is by no means a problem. With all the power management features turned on as should be the case for any properly-configured laptop, the P31's 3mW is competitive (and differences of one or two mW really don't matter here). 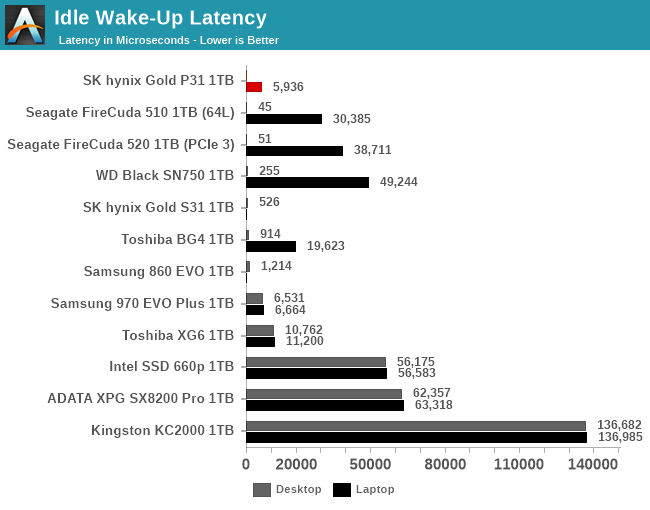 The SK hynix Gold P31 takes just under 6 ms to wake up from its deepest idle state, which is one of the fastest wake-up times we've measured from a drive that successfully enters a deep sleep state when instructed to. Wake-up latencies an order of magnitude higher are still common on many drives, especially those with Silicon Motion NVMe controllers. We were unable to measure any significant latency difference between our "desktop idle" settings and the active idle settings that disable all PCIe link power management; some other drives have been pretty close to this, with mere tens of microseconds delay.