Not content with just the ATX sized Z490 Unify, MSI has opted to release a mini-ITX version too, with the MSI MEG Z490I Unify. Following the same all-black theme but more condensed into a small form factor, the Z490I Unify incorporates an 8-phase CPU power delivery, with two PCIe 3.0 x4 M.2 slots, and includes a Thunderbolt 3 Type-C port on the rear panel. It also has a 10-layer PCB which is superb for a mini-ITX motherboard. 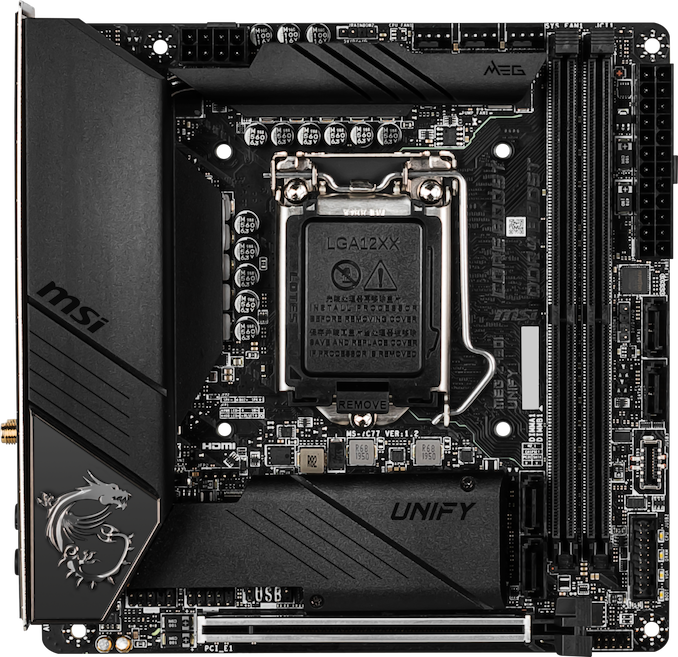 Being the only mini-ITX board at launch from MSI, it has opted to release it under its MEG enthusiast-level range under the Unify series. With this brings its subtle all-black design with a small MSI Dragon at the bottom of the rear panel cover, with a combined chipset and M.2 heatsink at the bottom. It has a single full-length PCIe 3.0 x16 slot, with two PCIe 3.0 x4 M.2 slots, one on the front and one located on the rear of the board. This adds onto the four straight-angled SATA ports which include support for RAID 0, 1, 5 and 10 arrays. It is using an 8-phase power delivery for the CPU with high-end 90 A ISL power stages, with a single 8-pin 12 V ATX power input for the CPU.

The MSI MEG Z490I Unify represents the enthusiast-level small form factor market. It has all the bells and whistles expected from a top-level mini-ITX model with Thunderbolt 3 support, dual PCIe 3.0 x4 M.2 slots, and benefits from Wi-Fi 6, BT 5.1, and a 2.5 G Ethernet controller. MSI hasn't provided pricing at this time.