Moving down the ASUS product stack from the Maximus XII series to the more affordable Strix range, the ASUS ROG Strix Z490-E Gaming is the most equipped from its mid-range gaming-centric options. The ASUS ROG Strix Z490-E includes a Thunderbolt 3 header, with two PCIe 3.0 x4 M.2 slots, six SATA ports, and an Intel 2.5 G Ethernet controller and AX201 Wi-Fi 6 wireless interface pairing. It also features a 14+2 power delivery with a broad set of heatsinks and has plenty of integrated RGB LEDs and RGB headers to allow users to make their systems pop. 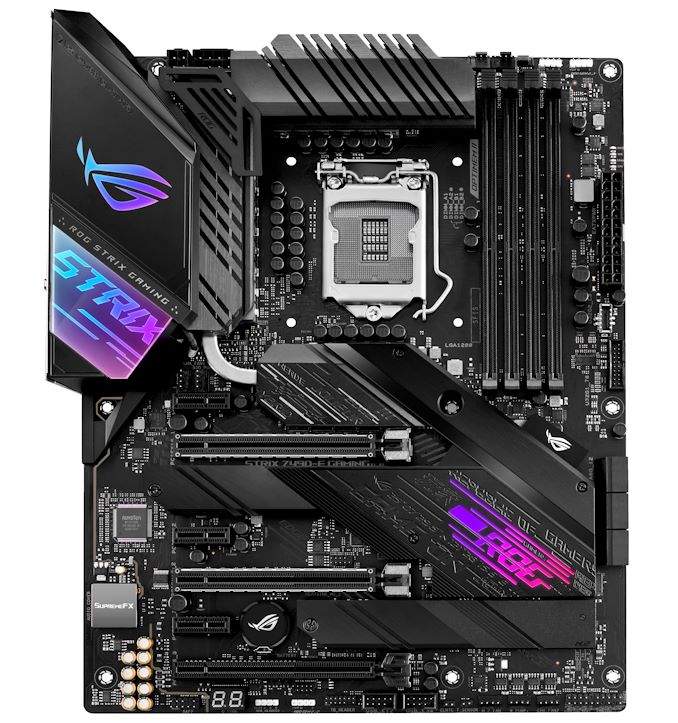 Looking at the design, ASUS Strix has an edgy look with its branding on the large rear panel cover and chipset heatsinks, with do include integrated RGB LEDs. The power delivery and chipset heatsinks are connected via a heat pipe, and also helps to keep the two PCIe 3.0 x4 M.2 slots running cool. The power delivery consists of a 14+2 design, which is using a teamed setup with an ASP1405I PWM controller in a 7+2 configuration. As mentioned, the ROG Strix Z490-E has two PCIe 3.0 x4 M.2 slots, with six SATA ports, and has three full-length PCIe 3.0 slots. These operate at x16, x8/x8, and x8/x8/+4, with three PCIe 3.0 x1 slots. Memory compatibility is decent with support for up to DDR4-4600 with a maximum capacity of up to 128 GB across four memory slots.

The ASUS ROG Strix Z490-E has an MSRP of $300 and caters to uses looking for a mixture of premium controllers with lots of rear panel USB connectivity. It targets the upper segment of the mid-range and is ASUS's premium Strix model. The Intel 2.5 G Ethernet port and Wi-Fi 6 wireless interface pairing offer plenty of quality networking options, while the pair of PCIe 3.0 x4 M.2 slots with heatsinks offer support for hot running NVMe SSDs.