Moving onto the ASUS ROG Maximus XII Hero Wi-Fi, we know this model will be available at launch, with a wide variety of features which targets enthusiasts and gamers. With a solid looking 14+2 power delivery, large heat-pipe connected power delivery heatsinks, and a Thunderbolt 3 header onboard, it offers plenty of variety. Also present is an Intel 5 G Ethernet controller, an Intel Wi-Fi 6 wireless interface, three PCIe 3.0 x4 M.2 slots, and six SATA ports. 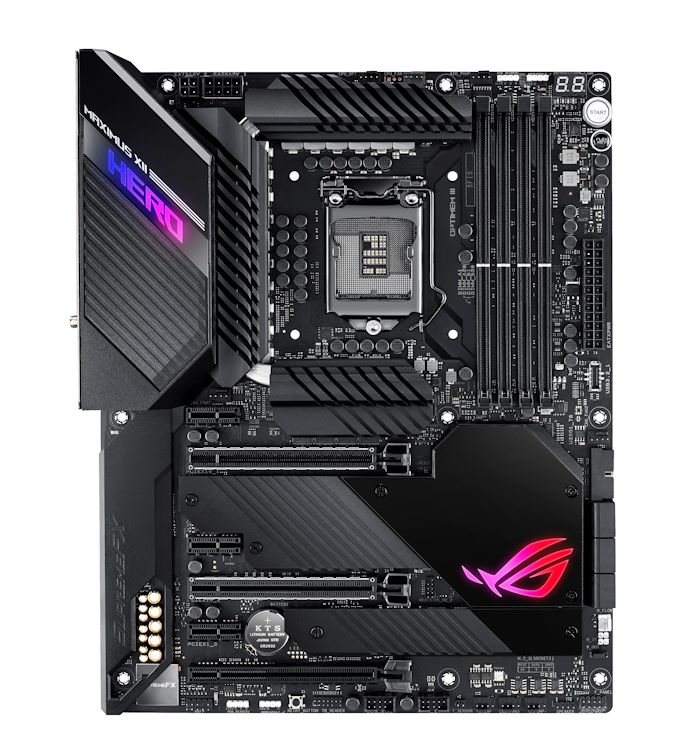 For the design, ASUS has included PCIe slot armor, with a large rear panel cover and chipset heatsink, both with integrated RGB LEDs. It has three full-length PCIe 3.0 slots which operate at x16, x8/x8, and x8/x8/+4, with three PCIe 3.0 x1 slots. For the storage is three PCIe 3.0 x4 M.2 slots, each covered with its own M.2 heatsinks, with six SATA ports with support for RAID 0, 1, 5, and 10 arrays. A total of four memory slots are present which has support for DDR4-4700 memory, with a maximum capacity of up to 128 GB. It is using a 14-phase power delivery for the CPU with 60 A power stages operating in teamed mode, by an ASP1405I PWM controller running in a 7+2 configuration.

On the rear panel is one USB 3.2 G2 20 Gbps Type-C, three USB 3.2 G2 10 Gbps Type-A, four USB 3.2 G1 Type-A, and two USB 2.0 ports. It includes a single HDMI 1.4b video output allowing users to use Intel integrated graphics, with a clear CMOS button and BIOS Flashback button. It is using two Ethernet ports, one controlled by an Aquantia AQC111C 5 G controller, with the other powered by an Intel I219-V Gigabit controller. Offering support for both Wi-Fi 6 wireless connectivity and BT 5.1 is an Intel AX201 wireless interface. Finishing off the rear panel is five 3.5 mm audio jacks and S/PDIF optical output which is powered by a SupremeFX S1220 HD audio codec.

The ASUS ROG Maximus XII Hero Wi-Fi has an MSRP of $399 which puts it in the upper area of mid-range, although it does have a premium controller set onboard. It represents the entry-level ROG Maximus XII model in a current stack of high-end models and is the only one of the currently announced Maximus XII models to be available at launch. With a Thunderbolt 3 header, three PCIe 3.0 x4 M.2 slots, and support for both two-way NVIDIA SLI and up to three-way AMD CrossFire multi-graphics card setups, the Hero Wi-Fi could be the hero you've been looking for to use as a solid foundation for a powerful gaming-focused setup.