While ASUS has confirmed to us that the ASUS ROG Strix Z490-F Gaming won't currently be available at launch, it does exist and we do have some details about it. Slotting in just below the ROG Strix Z490-E in its product stack, it will feature two PCIe 3.0 x4 M.2 slots, six SATA ports, and an internal Thunderbolt 3 header. It will also feature a 12+2 power delivery and support for 128 GB of DDR4-4600 memory.

For the design, it is likely to be consistent with the ROG Strix Z490-E in terms of aesthetics and has a similar controller set. It includes three full-length PCIe 3.0 slots which run at x16, x8/x8, and x8/x8/+4, with three PCIe 3.0 x1 slots. For storage is a pair of PCIe 3.0 x4 M.2 slots with heatsinks, and six SATA ports with support for RAID 0, 1, 5, and 10 arrays. We know that the ROG Strix Z490-F has support for up to 15 USB ports with a mixture of support from the rear panel and internal headers, with a Thunderbolt 3 header. 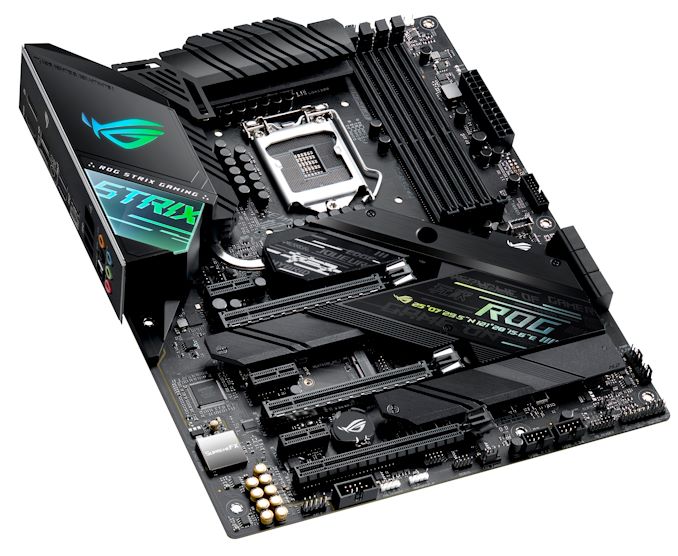 On the networking front, the ASUS ROG Strix Z490-F has a single Ethernet port powered by an Intel I225-V 2.5 G Ethernet controller, and although it doesn't include a wireless interface, it has a single M.2 Key-E slot for users to install their own. Powering the onboard audio is a SupremeFX S1220A HD audio codec, which will likely feature five 3.5 mm audio jacks and S/PDIF optical output on the rear panel.

Although we currently don't know the launch date for the ASUS ROG Strix Z490-F Gaming, it will come with an MSRP of $269.