In our ASUS Zephyrus G14, we have a total of 16 GB of DDR4. This is split between a single SO-DIMM module of 8 GB, and a set of 8 GB memory soldered onto the board. AMD will offer a version with 16 / 16, however this might come at a later date. 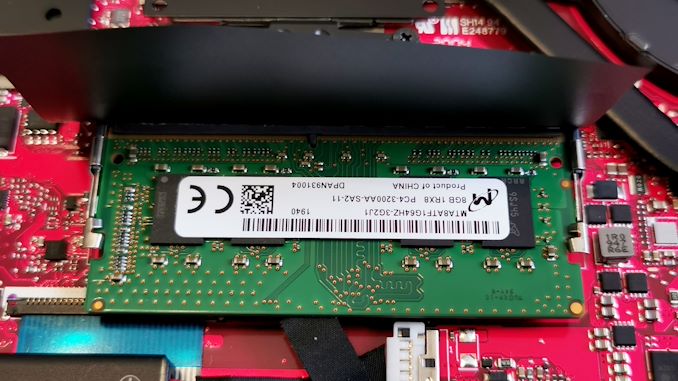 This memory is running at the AMD recommended for these processors, DDR4-3200. Through our inspection tools, we can tell that this memory is running with subtimings of 22-22-22 with a command rate of 1T. The command rate is certainly good, however the 22-22-22 is a little slower than what we see on a desktop system running at this speed, because here we have a system that conforms to JEDEC’s subtiming requirements. 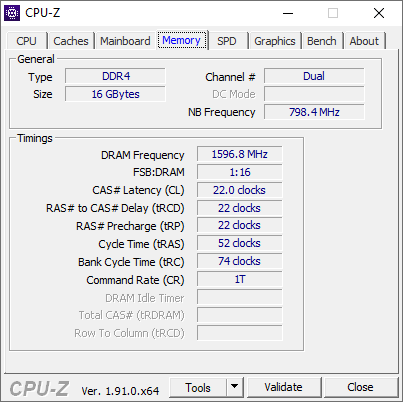 For our memory testing we wanted to see what speeds and capacities we could achieve. Corsair very kindly sent us some modules of 16 GB DDR4-3000 and a module of 32 GB DDR4-2666. This would give our system either 24 GB or 40 GB total respectively, which for a machine designed to do heavier duty workloads, having >16 GB is certainly welcome, as long as the performance hit isn’t too much. 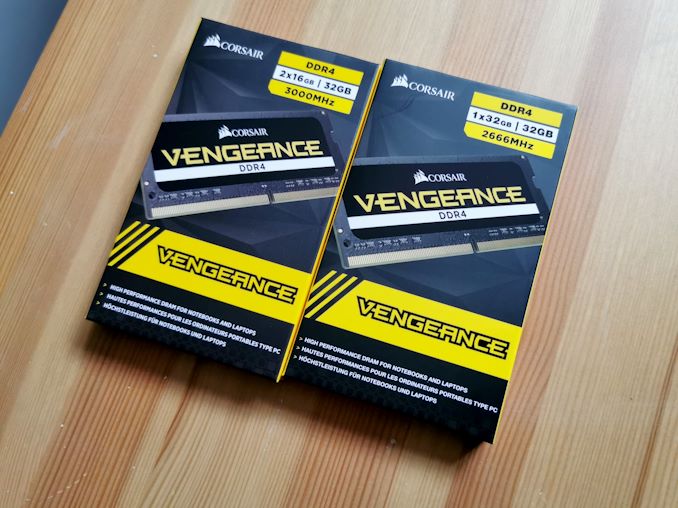 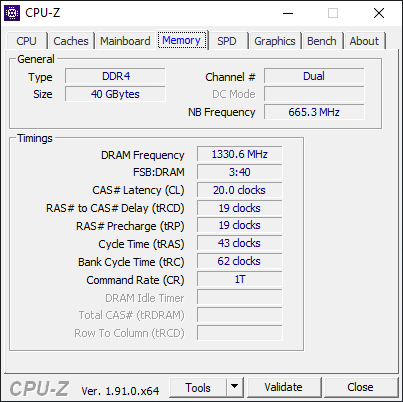 However, when we put in the module of 16 GB DDR4-3000, to get a total of 24 GB, the detected speed inside the system was only DDR4-2666. Looking at the module settings, this was because the DDR4-3000 speed was actually an XMP profile, and ASUS has not enabled the ability to set XMP profiles here.

We were able to get DDR4-2666 on the 32 GB module because this is the base frequency and settings for the module. The same with the 8 GB module that came with the system – it was flashed so that the basic SPD setting was DDR4-3200. If users want to get high capacity modules with the faster DRAM speeds on this system, they will have to configure the primary SPD profile of their modules, which isn’t an easy thing to do. 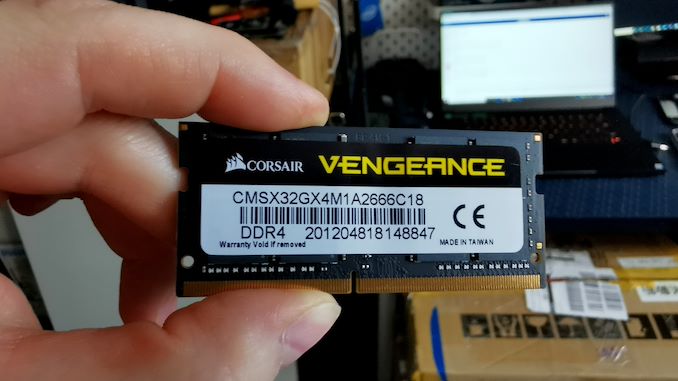 As a result, our tests are going to come down to the 8 GB DDR4-3200 module that came with the system, and compare it to the 32 GB DDR4-2666 module. Note that the latter is an 8+32 configuration, which is expected to run in dual channel for the first 16 GB, and then single channel for the next 24 GB.

With our AI test, there’s a ~20% benefit from having the faster memory, which decreases slightly when moved to a limited power budget.

We didn’t see any difference in something like Cinebench.

There was more of a difference in PCMark 10, however PCM10 isn't that great in showing where the bottlenecks are.

For the Civ 6 graphics test, the difference in performance between the two memory settings is really significant. This sort of game cares less about FPS, however going down to 22 FPS for 1080p Max and No MSAA means that the user probably has to dial that back a bit to get something more reasonable.

Going from plugged in to not plugged in, we didn’t see much of a change with the slower memory, however the DDR4-3200 setting still gets a serious benefit over the DDR4-2666 arrangement.

Overall, 16 GB of memory in a system like this isn't the best configuration - people who need the power are going to likely want 32 GB. However, users putting in their own fast module when buying the 16 GB version are going to have to be careful about the performance. Both the integrated graphics and the discrete graphics take a knock on performance going down from DDR4-3200 to DDR4-2666.